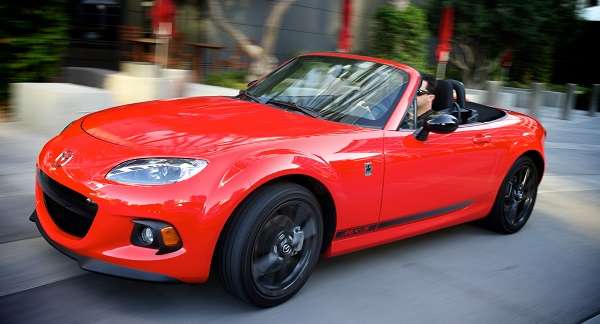 The current 2014 Mazda MX-5 Miata is a fabulous car. Should you buy one now, or wait until the next generation, all-new vehicle comes out?
Advertisement

Seeing a 2014 Mazda MX-5 Miata on the road today reminded me that spring is in the air and convertible fever is spreading throughout the United States. Those who catch it will want to immediately run out and buy a new convertible, despite the fact that the prices are likely to be higher in April than in any other month of the year. As a complete Mazda Miata fanatic, I am inclined to say “go get one!” However, there are two sides to the argument given that Mazda is close now to releasing the first truly new Mazda Miata since 2006.

Let’s not pretend that this writer is impartial. As a former owner of a 2007 MX-5 Grand Touring with the sport package I can attest to the deep satisfaction that a Miata brings to any driver. The current generation Mazda Miata is a fantastic car in terms of pure driving pleasure. Whether you plan weekend back-roads tours, or on-track fun, there really is no better car, at any price point. That said the current generation Miata does have a couple things it can improve upon in the new model.

First, the information and entertainment systems in the Miata are sub-par for any vehicle. I know the argument that the sound of the birds chirping will be your music and the sun your guide, but a decent stereo and a built-in Nav would improve the road-trip fun factor in this little gem tremendously. I suspect that this will be addressed in the new version. Also, the Miata gets about 27 MPG now on road-trips. Not bad given the car’s mission, but terrible by the standards of a car its size and weight. Worse than any other Mazda car. This will be fixed in the next car for sure.

Now let’s consider what a 2016 Mazda MX-5 Miata might have we don’t want. First off, it might be harder to get, more expensive, and late. So if you are like me, and you are wise enough to realize all of our days on this Earth are limited, maybe act now for that reason alone. Next, do you want the first year of any new vehicle design? I trust Mazda. Mine never had a single major issue in 4 years of ownership. However, mine was built before the improvement to the synchros came out. Guess what? A person I let drive mine damaged the synchros. I could have used that improvement. Also, the engine had other internal upgrades that I did not have and that if I had tracked the car, would have wanted.

So there is a choice to make. Do you wait until next year and hope the new car is ready for you or do you go out now and get a proven vehicle with very few compromises? We are not asking rhetorically, tell us your plan in the comments section below.

Malcom Rogers wrote on April 9, 2014 - 1:33pm Permalink
I have a 2010 touring edition with r/hardtop top, every thing you said is correct, love the car no problems in four years and 48,000 miles. But, I am looking forward to the 2015/16 model from a styling stand point. Hope the new one is not so plain, profile has been almost the same for 25 years and I am aware that's what some love about them. Have looked at lots of sneak photos but really don't know what the new one will look like for sure.
John Goreham wrote on April 9, 2014 - 3:49pm Permalink
Thanks Malcom R. I have no clue what the new car will look like from Mazda, but I am a bit concerned it may have a flat (up and down) style nose to make it look like the other Mazda cars and meet pedestrian strike standards. Maybe it won't be so bad. A compact spare would be nice too. I had 2 punctures.
Richard wrote on April 11, 2014 - 10:13am Permalink
good question. just bought the current hardtop Miata club 30 days ago. yes, new cars are supposedly superior in everyway in the technology department. Except for the WRX, which is slower due to gearing. My reason is I do not like how the new car looks. granted we have yet to witness the official unveiling, none of the spy photos or the renderings impressed me. As for the shortcomings, as a second car used for short trips and pleasure drives, it is a non issue for me. My day car has all the desired luxuries.
Guy wrote on April 13, 2014 - 10:29pm Permalink
I for one love the Mazda Kodo design language and think, from what I've seen of mock up renders, that it looks great. I've always sort of disliked the look of the MX5. The taillights and the roofline and the smile. I've loved what it is as a car but never find myself longing for one because of how it looked. I suppose I'm quite shallow in that regard but I find style and design to be of utmost importance in a car choice. I think if the new car looks as good as the current gen Mazdas and doesn't compromise the driving pleasure I'm definitely going to buy one. I love mazdas. My current and first car is just a 2007 Mazda 6 luxury sport and even in it's heavier taller body, it grips and handles amazingly as Mazdas do. But I'm on the 2015 MX5 train. And just praying the styling and equipment quality can reach the same level as it's driving quality. Then there'd be no other drivers car worth looking at :P
John Goreham wrote on April 14, 2014 - 11:00am Permalink
Rarely do I agree completely with anything, but I agree with your post. I did not like the smile that was added to the current generation around 2008ish. I had the "Carp-mouth" version before that. Koi I think the designers would call it. I often call the second generation of Miatas "the pretty ones" but they too looked a little unfinished in some way to me. If the new one is a looker it could lure many back to the model. Thanks for taking time to post.
Darcy wrote on April 15, 2014 - 12:24pm Permalink
My wish for the new car inlcuding hoping for a great design/looks, is conectivity. A good bluetooth or better yet a usb connection to the audio system is what I really want. It sounds a little superficial I know, but that is the only thing I personally think a current Miata needs.
John Goreham wrote on April 15, 2014 - 1:41pm Permalink
That is not at all superficial. This is the ultimate road trip and back-roads touring car available to those with a budget of $30K. I was constantly frustrated by the lousy Bose system in my MX-5. No Pandora, no Bluetooth to stream music from one's phone? The Miata is all about pleasure and good tunes and when one is touring around in a convertible that is a nice addition. There were many times I was in the mountains of New Hampshire and there were no terrestrial radio stations. Never mind using that gawd-awful old-tech satellite radio which can't see through mountains or tree cover. I think you nailed it. I would add a decent built-in Nav system to help me find the best back-road routes on the go. Better yet, skip all that and do what Scion does with the FR-S. Just put the standard infotainment in a double-DIN hole and let me throw the factory system in the trash get my own set-up. Thanks for your comment. Spot-on.
Jeffrey Brandt wrote on May 13, 2014 - 4:27pm Permalink
I am looking forward to the 15, and hoping for the 200hp, turbo 1.3l motor. I currently have a 90 with 210k miles. I totally love the car, but always wished for more power for passing. I spent about $500 and upgraded my stero with a pioneer premier unit, which gives me all the connectivity and sounds I need. That, plus a tablet,or my phone gets me where I want to go. With my shock, brake, ppf brace, and cold air intake, 10 lb flywheel etc., upgrade, this is the best car I have ever owned! Not a setup a 67 year old, great grandfather is susposed to be driving! All of the newer miatas I have driven just didnt hit the, " I gotta have it" button, but hopefully the 15, or 16 will be the one.