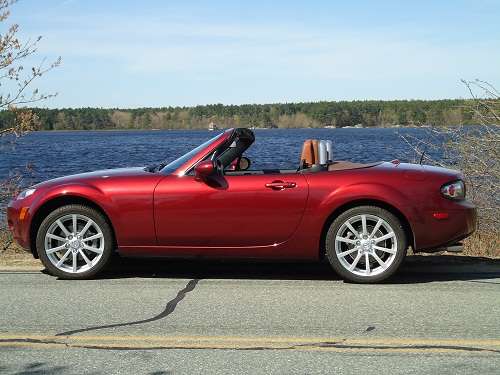 When Kelly Blue Book (KBB) named the 2012 Mazda MX-5, for the rest of this article called the Miata,a Ten Best Convertible Road Trip Car, it gave an icon a final award. The 2012 Miata is the last of this current generation. Soon a newly styled 2013 Mazda Miata will be born and the result may be fantastic, or it may be tiny. Sports car fans the world over wait with baited breath. In a press release today, Mazda quotes KBB as saying "whether tracing sinuous back roads or circling simple freeway on-ramps, few cars can better transform those arcs into pure joy than the Mazda MX-5 Miata." Let’s look at 5 reasons why this generation Miata is worthy of being called a 10 best road trip car.

1) The sense of speed. During test days auto writers often find themselves driving super cars, exotic cars, sports cars and many 6 figure convertibles back to back. Any one of them will tell you that on public roads the Miata is maybe the most fun of any automobile on the planet to drive. When one is tearing around back roads, shifting, hanging out the rear end a bit, redlining the engine, and then passes a police car the instinct is to look down. More often than not the car is not far above the posted speed limit. The Miata is blessed with a great sense of speed even at slow miles per hour. That makes it a blast to drive.

2) Driver’s seating position. Get into some convertibles we won’t name (Nissan 370Z) and you feel like you are in a bathtub. You cannot rest your arm on the top of the door and you feel like you are surrounded by a wall. The Miata offers a high up seating position and one’s left arm is perfectly happy on the top of the door. There is the sense of flying because there is nothing but the windscreen in your view. Your right hand will fall perfectly to the shifter and the controls can all be reached and operated by hand without looking.

3) No distractions. The Miata will not distract you with that stupid disclaimer you have to tap to make the navigation system work. Because there is no navigation system. You won’t have to navigate the touch screen trying to find radio stations because there is no touch screen. All the junk that distracts a driver is missing, and all the stuff you need is in the car. Bob Dylan once said “All I’ve got is three cords, a red guitar and the truth.” That is how the Miata is. Three pedals, a stick shift and the truth.

4) All the power you need. Many people assume the Miata is underpowered because it only has 167 Horsepower. The fact is that with the limited slip differential and traction control this car can burn rubber in three gears and can barely put the power down in any kind of start involving a turn. Say a right turn from a stop sign. If you flog the Miata it thanks you by stepping up on tippy toes and dancing. If you red-line it sings to you. The power in is there. The driver just needs to put it to use.

5) Affordability. It costs less than a pack and a half of cigarettes per day to own. Add up all the costs including gas, insurance, maintenance, taxes and depreciation. The car cost less than $320.00 per month to own. Cigarettes are now over $7.10 per pack. Do the math.

KBB naming the Miata a 10 Best Road Trip car may seem like a “Dog bites man” story, but the truth is this car now in its sixth and final year of production is as good, or better on road trips, than may twice its price.

Tsingshan's Threat to Tesla: EV Maker Is In Battery Crosshairs
Tesla-Funded Research Reveals One of The Biggest Mysteries of EV Battery
END_OF_DOCUMENT_TOKEN_TO_BE_REPLACED