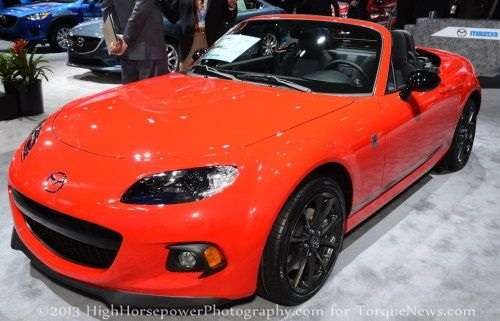 Most of the automotive press and many enthusiasts claim that the original Miata was a copy of a Lotus. They think it because the Mazda people said exactly that. However, the Miata was not a copy of an overpriced, low-volume, unreliable, but fantastic Lotus. In fact, it was a copy of the copy of the Lotus, that being the Fiat Spider. We enthusiasts often speak about the similarities between the Lotus Elan, The Fiat Spider, and the Mazda Miata. Obviously those being that they are all open top, small, wonderful to drive, roadsters. However, the differences are also important. What are the key differences between the Lotus Elan, the Fiat Spider and the Mazda? Quality, price, and production. The original Lotus Elan sold about 17,000 units – ever. The Fiat Spider sold over 200,000 units. The Miata has sold over 800,000 units and counting. In terms of quality, price and production the Miata is the hands down winner, with the Fiat second. As you read on, keep that thought in mind. Fiat will not brand the new roadster as a Fiat right away, but rather, will begin with the new model as an Alfa Romeo. As you may know, Alfa Romeo also had a Spider. If you are unfamiliar with the car please take time to view the 1967 film The Graduate this weekend as homework. Alfa Romeo is a much more expensive brand than Mazda and does not presently have a dealership network in the US. Thus, Mazda and Fiat can happily go forth with this new vehicle in different geographical and economic marketplaces.

The Fiat-Mazda Platform Partnership Plan
Mazda announced today that the new partnership will result in a new Mazda Miata (MX-5 for those who never owned one) that will be produced, like the previous generations, in the Hiroshima plant, as well as a new Fiat model that has not yet been pinned to any specific production point. It is likely the Hiroshima plant will make both for cost savings reasons. The two cars will share a platform. The “platform” that we often hear about cars sharing, also called “underpinning,” is the most expensive part of the car to produce from scratch. A platform is so expensive to design and maintain throughout its lifecycle that all car makers now share platforms within their own brand. From that common platform springs forth a wide variety of finished vehicles. For example, Toyota has a platform that it uses for the Avalon, Highlander, Venza, Lexus RX350, Lexus ES350, and a few other models. Similarly, Honda uses a total of two platforms for the majority of the vehicles it produces, and a third for its smallest cars, and a fourth for its minivans and trucks. From that group of just four platforms Honda makes literally dozens of vehicles. The reason that Mazda needs a platform to be shared is that very small, rear-drive vehicles are going away. Although Mazda has sold a lot of Miatas, it has seen that volume trickle down to about 500 per month. Thus, it is economic suicide to go ahead with a dedicated platform of its own just to keep the Miata going. There would be no profit. This is why Honda killed its wonderful, and much lauded, S2000 rear-drive roadster. Without another car, or bunch of cars, to share the platform with, the S2000 was a huge drag on profits.

Recently, Toyota (Scion) and Subaru teamed up to produce a rear drive platform they use to make two similar rear-drive sports cars. Doing so made the cars possible. Mazda and Fiat are doing exactly the same thing, but it is likely that the Alfa Romeo and Mazda will be more individual than the Scion FR-S and Subaru BRZ are. For one, the engines they use are to be different.

Mazda and Fiat Engines
Both Mazda and Fiat are in a sweet spot right now in terms of engines. The last generation Mazda had its own engine. It wasn’t shared with any other US model Mazda. Forget that for future models. Instead, Mazda will very likely adapt one of its small, 2 liter or less, Skyactive engines for the new Miata. Mazda will probably choose a normally aspirated, non-turbo model. The Japanese are very much into feel and balance, and a non-turbo engine delivers that. However, Mazda has used a turbocharged engine in the past for limited edition Miatas (Second Generation MazdaSpeed models), so it is not ruled out. Here at TN our money is on a direct-injected version of the new 2.0 liter engine used in the Mazda 3. Look for about 175 horsepower.

The Fiat will likely power the Alf Romeo with a small, 1.4 or 1.6 liter turbocharged engine like that found in the current Fiat 500 Abarth. Using Multi-Air and direct injection the engine will have over 200 horsepower.

Fiat and Mazda Parts Commonality
Automatic transmissions may be shared, but manual transmissions will be from each manufacturer’s current parts supply. A dual clutch manu-matic would be a huge advance, but neither company is well known for that technology right now. These cars are throw-backs in some ways, and thus the manuals are really the defining trannies. A downshift rev-matching manual like that in the Nissan 370Z and now the Porsche 911, would make the cars more fun to drive, and could be coming. (To avoid being black-balled by the main-stream motor-press that feature will need the ability to be turned off to assuage the aging heel-toe drivers who run some of those publications.)

Other parts commonality will be necessary to compete price-wise with the coming convertible Scion and Subaru rear-drivers. As an example of that, let us point out that the tires that Scion uses on the FR-S cost that company almost nothing (or literally nothing). Since they are exactly the same as those found on a hugely popular and high volume model the company sells, they are likely either extremely low cost, or they are gifted to Toyota corporation by the tire manufacturer. Why? Two reasons. First, that tire manufacturer is very happy to see their name on that sidewall on the thousands of photos produced of that vehicle. Second, with such a huge purchase order pending for the Prius tires (oops, gave it away) each contract cycle, it is very easy to ask for a few free tires to make the deal final. It is this kind of parts commonality Mazda and Fiat hope to leverage to keep their new roadsters profitable.

The press release from Mazda today said that the company hopes to reach its “Stated goals by 2016.” If that is the case, we have a few years to go before we see the new Miata and Alfa Spider. That is not an entirely bad thing since the current Mazda MX-5 Miata is just so good.

Photo of the 2013 Mazda MX-5 Club courtesy of HighHorsepowerPhotography.

Three Deuce wrote on January 20, 2013 - 12:15am Permalink
HI! John, Since I have owned(new) all of the cars mentioned, I can't quite concur with your finding commonality between them, other then they are sports cars. The only reasonable reason to compare the Fiat 124 with the likes of an MX-5 and Elan, is the new association between Mazda and Fiat. A better choice would have been the X1-9, a car I have also owned, twice. In using the Fiat, you could have easily used MGB, and TR's. The focus on the MX-5 and Elan, was handling, not a pretty little sports car for the fortunate masses. My first sports car was a 59' Alfa 'Giulietta' Spider, which proceeded the Elan. The great small 'post war' open sports cars, start with the Giulietta, followed by the Lotus Elan, followed by the X1-9, then the MX-5. Some where in there, the RX-7 is a good fit. As to Fiat/Mazda sharing platforms, this is probably a good thing for the bottom line, but with today's automotive technology, building low production cars brought quickly to market, can be profitable, or at least, not hurt the bottom line to any degree that would threaten model sustainability. Niche models will have to be profitable or there is not much of a future for anything, but appliances, and there is not much profit, if any, in those. Not everybody, can build American pick-ups for corporate profitability. Mazda needs the MX-5 to carry its corporate 'Zoom!' 'Zoom!' philosophy. So I don't think it will be going away soon, no matter the bottom line. Especially if it, puts some serious MPG into that Zoom. As a' Heel & Toe' geezer, I'm with the aging heel-toe editor/drivers who pride themselves on fully embracing, mechanically meshing, the 99th percentile of performance skills. Men who can also walk up to, start, and drive away in a late twenties, early thirties Model 'A' Ford or Chevy, Buick, Cadillac, etc. Something the young, so called, automotive journalist would be at a loss too do. Like shifting without using the clutch or Double-clutching. or 'propping' an airplane or rebuilding an engine or transmission. Driving a sports car, well, is more then pointing it down the road and around a corner. Taking any of that away defeats the purpose and the involvement of sporty performance driving of Man & Machine. Something that would cause aging heel-toe drivers and the likes of Nuvolari, Caracciola, Rosemeyer, and Clark to roll over in their graves. I'm sorry, if you can't or won't rev match, your not worthy of a great sports car, just a pretty(?) poser ride with a loud exhaust system, will be sufficient. Regards ...Tre
John Goreham wrote on January 23, 2013 - 5:22pm Permalink
Well said. I loved your pickup truck observation. Right on the money. Don't get too worked up about me being a young whipper snapper who drives a slammed Civic automatic. I owned the best Miata ever produced by the Hiroshima factory (2007 Grand Touring), have driven racing Miatas, and I drive a stick like ringin' a bell. I am crazy attractive though, and pretty isn’t far off the mark :) It's funny, I was recently called an “Older gentleman” by a reader in the comments under a Tesla Story I wrote, and now a “young, so called automotive journalist, pretty poser!” Thanks for your passion and your comments and for reading TN. We don’t take our readers for granted.
Nicolas Zart wrote on January 20, 2013 - 2:33pm Permalink
While Alfa Romeo has shared components and platforms with others, see the Arna/Nissan for a dubious result or the 164/Saab 9000/Lancia Chroma and I forget the last maker, it was sometimes a successful deal, sometimes not so much. I can't see how using one of the brand's main icon, its Spider is a good idea on a Mazda underpinning. Mazda makes a fine Miata but it's not an Alfa by any stretch of the imagination. This only shows Fiat and Marchione don't understand Alfa Romeo and are missing the opportunity yet again to bring back the former performance champion to its glory. At this stage, turning Alfa Romeo into an alternative energy platform would make more sense. Fiat has always had a problem losing their precious Jano to Alfa Romeo eons ago. I'm sure even the Germans would do a better job at reviving the brand then what is happening now. It's sad.

LG's New EV Battery Plant Is a Welcome News for Tesla
Tesla Giga Berlin's New Hurdle: It's Not Only the Gov't, but Now Tesla Itself
END_OF_DOCUMENT_TOKEN_TO_BE_REPLACED