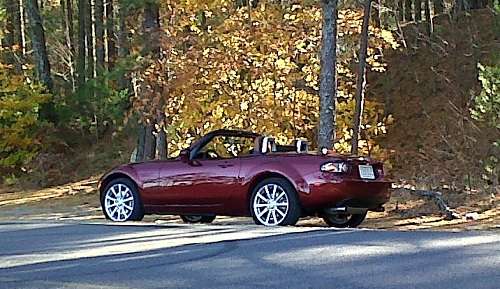 Sometimes the stars just align. If you have been dreaming of buying a Miata, now is the best time to finally realize that dream.
Advertisement

If you have often imagined yourself driving down a mountain road in the fall in an open top roadster with leaves falling all around and making a wake behind you, then you should take action now. The Mazda Miata (MX-5) is one of life’s perfect things. If you want to enjoy driving to its fullest, want to have an open top car that is also a sports car and grand touring car, then the current 2012 or 2013 Mazda Mx-5 Miata is that car. Some things have come to pass that make now the ideal time to finally go out and pull the trigger on that car you have been telling yourself is on the bucket list. Here are the top 4 reasons now is the best time in recorded history to do it.

Reason 1 – The Miata Is Going To Change - Not In a Good Way
The first and second generation Miatas were all about back to basics driving. Tiny, too small for anyone over 5 foot 10, and for the most part underpowered go carts -wonderful, fantastic ones, but very limited. In 2006 and a half, the car grew slightly in every important way. Now if you were under 6 feet it was a big enough car. The power increased, matching the previous turbocharged MazdaSpeed Miatas rating, and it was more usable power. The shifter added a sixth gear on most versions. Traction control, limited slip differential, and side airbags became part of the common packages sold. The car grew up a bit. It also became dramatically more capable. In the many racing series using Miatas, the new, third generation cars as they are called, had to add weight to make it fair for the older Miatas. Mazda has now teamed up with Fiat and they are going to jointly produce a pair of cars on one platform. Given Mazda’s current trend towards smaller and weaker cars, this is not a good thing. Nor is the involvement of Fiat. Fiat likes small cars too, but also overcharges for them. The evidence at hand suggests a smaller, less powerful, and more expensive Miata in the 2014 model year. Get the best one now, while you can.

Reason 2 – Toyabaru and Subyota Make Miata’s Cheaper
Toyota’s Scion FR-S and Subaru’s new BR-Z are aimed squarely at the Miata buyer. These underpowered coupes with amazing handling are exactly the sort of car that a Miata buyer or current owner might want if they were to opt for a coupe. These two cars are now in dealerships and are siphoning off Miata buyers. That can only mean good things for the folks who still want a Miata. Go in bold and ask to pay $1000 under dealer invoice.

Reason 3 – It Is Fall
Most new convertible buyers start looking in early spring. Mazda times the arrival of its fleet of Miatas (less than 10,000 were built in the last 12 months) and tries to ship them from about March through June. This author bought a new 2007 in January once and got an amazing deal. These cars are doorstops once the snow flies in November. Dealers want them gone to make space for the CX-5 cute ’utes with all wheel drive.

Fall is also by far the best season to own a convertible. Summer can be too hot on many days and spring is too wet. The foliage, cool mornings and warm mid-day sun make September, October, and November by far the best months to drive around topless.

Reason 4 – Remember the Honda S2000
The Honda S2000 was almost a perfect car. More power than a Miata, slightly larger in some ways, with more performance, beloved by all who owned one. And it failed. The main reason it failed is a number. That number is 30,000. That is the number that spouses cannot get their brain around. When a person says to their spouse “I want to buy a car that is only useful for fun.” the spouse replies “How much does it cost honey?” If the answer to that question is above 30,000, the odds on this transaction happening decline exponentially. If the new Mazdiat passes over that mark in terms of actual sell price the car might fail and you will be left with no new S2000 to buy, no new Miata to buy, and a Toyabaru selling above sticker price with a roof welded to the space where sky should be.

Act now, while you can.

cottoncat wrote on October 8, 2012 - 6:16pm Permalink
The Miata is a practical car for a 1 person 1 dog household. Drove a 1995 bought used from 2002 until this year when I decided I had to have better A/C. Bought a used 2006 low mileage, just gorgeous. Parked at work, there was a flash flood, my beautiful car went under up to the console. Towed to the dealer, runs without any problem. Have spent very little money on maintenance over the years. Always being stopped in parking lots and told what a beautiful car. Love love love a Miata.
John Goreham wrote on November 7, 2012 - 1:27pm Permalink
Thanks for sharing. Sorry to hear about the flood.
Newman wrote on July 10, 2014 - 3:39pm Permalink
I have owned a 1996 Miata gen 1, and more recently a 2006 gen 3 miata. These are wonderful wonderful cars. I sold them both (the gen 3 just recently) and I'm already plotting to buy another one. Mechanically superior, exhilarating, good mpg, wow factor is off the charts. Get some nice tires on it and enjoy!
Ann wrote on August 16, 2014 - 6:33am Permalink
Looks like you were wrong about the 2014 MX5 not living up to "real sports car standards."I just bought a 2014 & it is everything a true sports car should be & more.I drove some of those old roadsters back in the 60's & this Miata puts every one of them to shame!I wish I had done this 20 yrs.ago!This car is almost more fun to drive than one person can stand.I love my 2014 Miata!