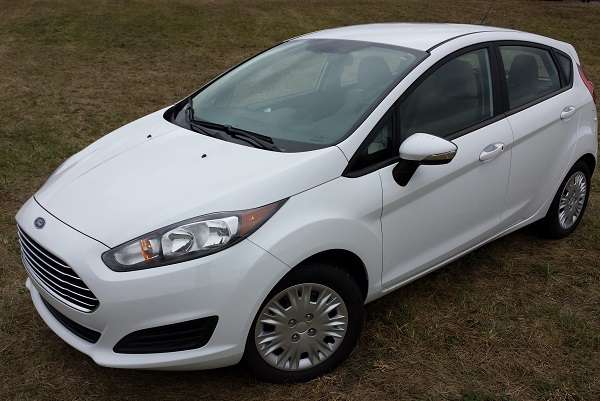 Do 3 cylinders, 1-liter, and a turbo add up to a party?
Advertisement

The 2014 Ford Fiesta Hatch SE is rather unusual in the US marketplace. It is a 1-liter car with a turbo and three cylinders arranged in-line. The car is capable of near-hybrid fuel efficiency, has a price tag under $20K and if you didn’t know it had a turbo when you drove it you would never guess. Is the 3 cylinder turbo a better setup for compact economy cars than a base 4-cylinder, and does the performance live up to the car’s name, which means party in English? Maybe.

2014 Ford Fiesta 3-Cylinder Engine
The 2014 Fiesta’s 3-Cylinder engine is a “no-charge” option. However, it can only come with a 5-speed manual. Why, I have no idea, except perhaps to guess that drivability is not acceptable with the automatic Ford uses in its base 1.6-liter 4-cylinder. The 1.0-liter turbo 3 achieves a respectable 125 horsepower and 123 pound feet of torque. I once owned a Civic SI that was a quick little car that had this same horsepower rating.

The Ford folks did a great job of making the engine seem like any other small base engine. It does not vibrate more than any base four-cylinder I have driven lately. Ford uses a trick flywheel to help offset the inherent imbalance the engine has due to having just 3 pistons. It works and it eliminates the need for a balance shaft. There is no turbo lag in this engine. The engine does not have the punch I usually associate with turbocharged engines, but one must keep the price point in perspective. As I mention above, this new engine is not meant to be a performance option, but rather a fuel miser option.

The Ride
Around town the Fiesta can be driven safely and without much drama. However, the car cannot be slowed to almost stopped in second and then safely merged into traffic. There is not enough power or torque. One must use first even when rolling. As any manual driver knows, cars don’t like to shift from 2 to 1 while moving. So one must adapt to the car. Given the fuel economy benefits a little adjustment is well worth it.

In my limited driving I achieved about 40 MPG in suburban driving, higher than the car's rating. Fueleconomy.gov says this car is rated at 31 city, 36 combined and 43 MPG highway. Ford’s window sticker says it does just a bit better. Either way, this is excellent fuel economy. Cars like the Corolla LE Eco and Mazda3 2.0 can also do about that and still seem almost peppy. However, the Ford Fiesta SE costs just $18,000. Those other cars are about 10 to 15% more expensive, and in this price category single thousands count to consumers on a budget.

My conclusion after being at a Ford presentation on this vehicle and having driven it twice now, is that the car is an important step. Many new engines are not fully-baked when they first see duty. This one has a lot of potential and in future model years may add power and torque. As it stands, the engine does compare favorably with the smallest base 4-cylinder engines, and it is indeed extremely fuel efficient. I’m just not sure it suits a car called “The Party.”