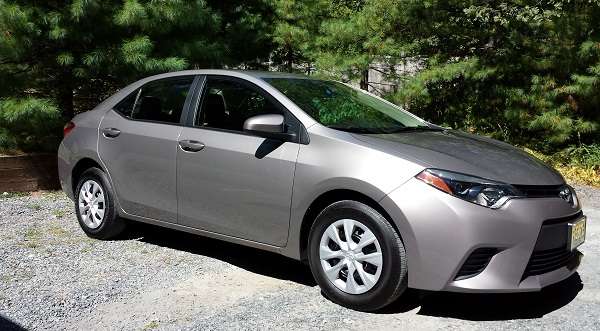 In terms of practicality, size, and cost of ownership, the very-green Toyota Corolla LE Eco is unrivaled.
Advertisement

This week I am testing a Toyota Corolla LE Eco. From my point of view, this is the most affordable green family car in America right now, and it can do things that no EV can. Even better, it delivers mileage very close to that of hybrid cars, at a much more affordable price for a car its size. After 201 miles of mixed highway and suburban driving my current mileage according to my own calculations is 43.5 MPG on regular unleaded. The EPA says that this car gets 42 MPG highway, and 35 MPG combined. I’ve never tested any liquid-fueled car this high in MPG, including the wonderful Mazda3, which does come close.

Read More: Toyota's 3 most surprising green car achievements of 2013 and Prius isn't included
Practicality Beyond Electric
I’m about to make my second trip in two weeks to New York State for work. The one-way trip will cover about 240 miles. There is no EV on the market that can do that trip without stopping for over an hour. My route does not cross paths with either of the two Tesla Superchargers in the Northeast located north of the New York City suburbs. Were I to take a car like the Nissan Leaf, I would have to charge at least twice, and add at least 90 minutes (more like 4 hours) even if there were charging stations located along my route. Frankly, with the ride being over 3.5 hours, it would not be practical to add any more time. I’d have to stay overnight.

More Frugal Than Hybrids
My test car has an MSRP of $19,500. It is a very comfortable, very nice to drive 5-passenger car in which I can sit behind my six-foot self comfortably. Name a hybrid even close to this car’s price that meets these qualifications. I can’t think of one. The Prius can match or top the fuel economy, but costs a lot more. Cars like the Volt can beat the fuel economy using electricity and gasoline in combination and could also make the trip without a fuel stop but at almost twice the price. Even after government kick-backs the Volt costs about 35% more than this Corolla and it is smaller.

See More: Why is the Corolla only a Top Safety Pick?

Corolla Green Credentials
The Toyota Corolla LE Eco emits less than 260 grams of CO2 per mile. By my estimation, including EVs and all forms of hybrids, there are maybe a dozen vehicles this size for sale in the US that emit so little CO2. None even come close to matching the price point of the Corolla. The closest matches I can think of would be the Nissan Sentra and Mazda3 in their most frugal and fuel efficient versions. Neither can top the Corolla LE Eco.

No Compromises With Corolla
Surprisingly, the Corolla LE Eco is a great car to drive. Around town it has enough power and torque to make the car feel “normal.” The ride comfort is excellent and on the highway one needs to watch their speed or tickets will ensue. The LE Eco version of the Corolla is not only the most fuel efficient of the Corolla family, it also is the most powerful. This is not some imaginary trim level that you will never see on the road. Toyota sells thousands of these per month.

Looking at the equipment it has I noticed three things right away that my prior test car, a smaller, German sedan test car lacked. The Corolla has automatic climate control, a back-up camera and a spare tire (compact). My $36K German sedan didn’t have this equipment, didn’t handle as well as this car, was less comfortable over rough roads, and was much smaller in size.

Corolla Cost of Ownership and Cost Per Mile
By my math, the Corolla LE Eco has so far delivered a fuel cost of under 8 cents per mile with regular unleaded now at $3.381 according to AAA’s daily national average. In case you are wondering, diesel costs $0.40 more. Combine this amazing cost per mile for fuel with Corolla’s low purchase price, and the two years of free maintenance all Toyotas come with, and it pretty hard to find any EV or hybrid this size that can match it for cost of ownership. I can’t find any.

When it comes time to sell your green car there is no car better than the Toyota Corolla except the pricey Lexus CT 200h. The Corolla retains 56.8% of its value after three years. How do the Volt and Leaf do? NADA says the volt retains 41.6% and Leaf 38.2% of its value. If I am missing a green car that is the size of the Corolla inside, at near to its price point or cost of ownership please point it out to me in the comments below.