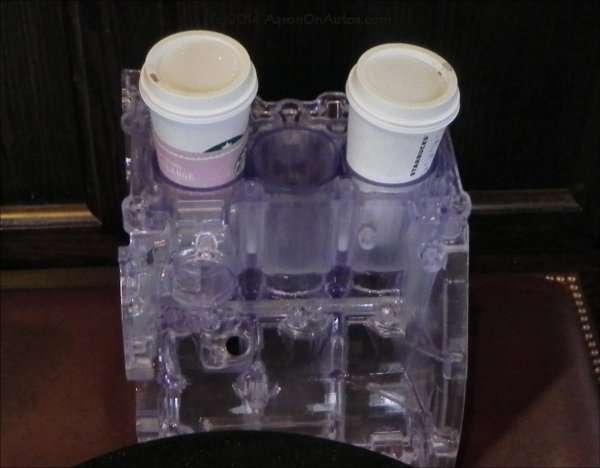 Imagine an engine that produces 123 horsepower, 125 lb-ft of torque, but whose cylinders are so small, they're just the right size to hold a Starbucks grande cup. That's Ford's new EcoBoost engine for the 2014 Ford Fiesta.
Advertisement

Ford invited TorqueNews to Denver, Colorado to have a look at the new 1.0-liter EcoBoost engine that will be featured in the 2014 Ford Fiesta later this year. The engine displaces less volume than the average soda pop, yet it produces more horsepower and torque, and has better fuel efficiency than an engine that's sixty percent larger.

On hand was a mockup of the engine (shown above) which helped Ford's representative, Paul Witt, explain how this high-compression engine, which fits into carryon luggage, does its magic.

Now, compare that to the 1.0-liter EcoBoost which produces 123 hp, 125 lb-ft of torque (with 145 lb-ft available in short overboost spurts), with fuel economy at 32 mpg in the city and 45 mpg on the highway. All without adding electrification, expensive lightweighting, or other complex technologies to the mix.

The EcoBoost series of engines, which range from this new little 1.0L to the big 3.5L V6 found in the F-150, all operate on the same principle. It's similar to Mazda's SKYACTIV engine system, which was developed in cooperation with Ford.

The EcoBoost engines are high-compression engines, which means that they operate under higher pressure than standard gasoline engines, verging on the pressures found in diesels. Combine this high compression (which itself increases burn rate and decreases fuel consumption) with the advanced gasoline injection, turbocharging, variable valve timing (VVT), and precise electronic controls found in the EcoBoost series and you have extremely efficient engines that deliver a lot of power with little fuel use.

Going back to that Fiesta, this means that the 1.0L EcoBoost engine delivers better horsepower and torque than does the 60 percent larger 1.6L engine as well as far better fuel economy numbers. This gives the 1.0-liter-equipped Fiesta a best-in-class fuel economy rating, including highway mileage that beats some diesel and hybrid models like the Volkswagen Golf TDI and the Honda Insight hybrid.

It's no wonder automotive journalists gave the little 1.0L EcoBoost engine the International Engine of the Year award two years running (2012, 2013). It's amazingly small and very powerful. Ford says that the new 2014 Fiesta with the 1.0L engine will begin entering dealerships early to mid-summer this year.

Parks McCants wrote on February 12, 2014 - 7:29pm Permalink
Interesting technology. Thanks for the read. * Note: The 2014 Honda insight is claiming 44/44/44. Real world? We'll see. What is the estimated life expectancy of this extremely high compression, Turbo boosted marvel?
Aaron Turpen wrote on February 13, 2014 - 4:30am Permalink
Probably the same as most of their other engines. Given the way it's built, probably pretty good. Mazda has had good luck with theirs and this engine has been on the road in Europe for more than a year.
Kris Keller wrote on February 12, 2014 - 8:02pm Permalink
You can special order them now in the States. I took delivery in December. My last tank averaged 46.7MPG City (stay under 8psi of boost), and not to mention on a Mustang chassis dyno using 91 octane it threw down 146whp/139ft-lbs , which translates to something around ~160hp off the engine. Impressive is an understatement.
Aaron Turpen wrote on February 13, 2014 - 4:33am Permalink
That is impressive, but I'm wondering how you got one. Ford told me directly that they don't have them available yet and won't until they enter production in the next month or so.
Frank wrote on February 13, 2014 - 10:55am Permalink
Aaron, I spoke with a Ford engineer a few years ago at NAIAS where I noted there is a limit to downsizing; and small engines will still not meet the 54.5 MPG going forward. He admitted the limit and noted that body weight will have to be reduced, to which I agreed. Today we see F-150 in aluminum. I mentioned a change to split cycle and he seemed mum. As I wrote in my book, "Splitting I.C.E.", splitting the Otto cycle will be the ONLY way to take that next DNA step without electrification of some kind and at a cost the masses will be able to afford.
Aaron Turpen wrote on February 13, 2014 - 12:31pm Permalink
Thanks, Frank. I've been watching the Scuderi and TourEngine models. I believe Honda, Fiat, and Peugeot/Citroen have talked about the idea in the past.