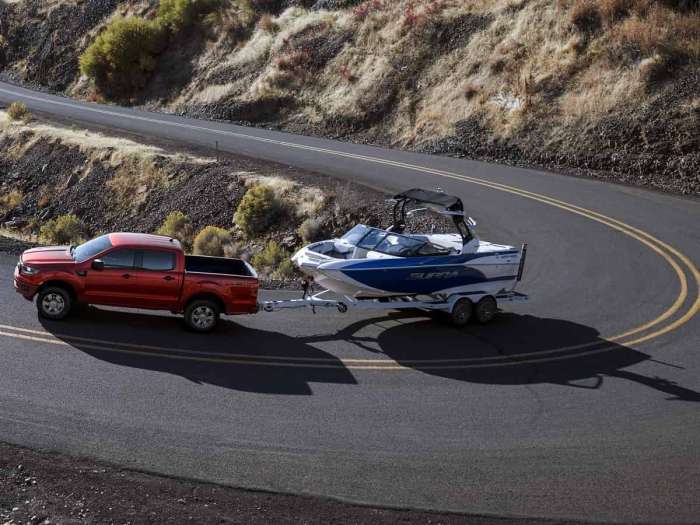 The all-new 2019 Ford Ranger will have a greater capacity for towing than both the top-selling Toyota Tacoma and also its closest rival, the Chevy Colorado V6. With a 7,500-pound towing capacity when equipped with the optional towing package, the Ranger offers an impressive towing capability that no other gas-powered competitor can match.

When discussion towing capacity the conversation generally turns to torque and power ratings, but there is more to a respectable towing rating than just the engine. The new Ranger will be equipped with a high-strength steel frame and robust solid rear axle. Now that we have been sure to add that, it's the Ranger's 310 lb-ft of torque that many folks will be pleased to hear about. The engine is coupled with a 10-speed transmission. The new Ranger's unique combination in its class may well offer the best pairing of fuel economy and capability.

The 7,500-pound towing rating is not just a random number either. Our own Patrick Rall is an expert on the subject of horse ownership and the lifestyle that goes along with that. Patrick says, "The 7,500-pound towing capacity allows the Ranger to pull the vast majority of two-horse trailers and many smaller three-horse trailers. These are the most common trailers in the equestrian world, so the Ranger could appeal to a great many younger horse owners who like the idea of the smaller truck with a smaller price tag than the F-150."

In addition to towing, the Ranger will have an impressive payload according to Ford. “Think of Ranger as the biggest and most capable backpack for your gear,” says Rick Bolt, Ford Ranger chief engineer. “With 1,860 pounds of maximum payload, Ranger can haul nearly a ton of gear to enable your next adventure.”

2019 Ford Ranger Quick Facts:
Ford is presently accepting pre-orders for the all-new 2019 Ranger. Production is about to begin and deliveries are expected in early 2019. Ford will be the new Ranger at its Michigan Assembly Plant.