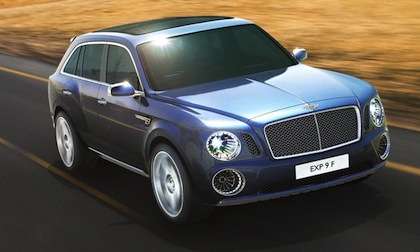 The speculation is finally over, because Bentley has unveiled its first-ever SUV, the all-new EXP 9 F concept.
Advertisement

Though rumors of a Bentley SUV have been circulating for a year now, the all-new Bentley EXP 9 F concept SUV is finally making its debut at this week’s Geneva Motor Show. While currently a concept, Bentley says that the EXP 9 F has the potential to become a third model-line alongside Mulsanne and Continental. The ultra-luxurious, all-wheel drive SUV combines a spacious cabin and superior driving position, with power, performance, and sophisticated technology according to Bentley. Also notable is that this sleek SUV is comfortable both on and off-road.

"We are very excited by the potential of a high performance, ultra-luxury Bentley SUV,” said Wolfgang Dürheimer, Chairman and Chief Executive, Bentley Motors. “We know that many Bentley customers already own SUVs, admiring their style, luxury, performance and versatility. With EXP 9 F, Bentley is making a clear statement of intent that we have both the expertise and desire to meet and exceed their expectations."

“The style had to reflect Bentley's sporting character despite its radically different package and purpose together with sculptured, flowing surfaces in keeping with the Bentley tradition,” said Dirk van Braeckel, Bentley SUV Director of Design.

As dynamic as the Bentley EXP 9 F’s exterior is, the interior is just as impressive. Bentley has attempted to create an interior that is a “fusion of luxury with utility” by including traditional handcrafted materials with exceedingly durable surfaces, along with cutting-edge touchscreen interface technology and multiple entertainment options. As for traditional touches, the EXP 9 F includes wood, leather, and polished metal, but also contains more modern elements like virtual instrumentation and inventive reversible floor mats, which are silk wool on one side (for city use) and saddle leather on the other (for the outdoors).

"The challenge for the interior design team was to create a cabin which provides a blend of luxury and utility. The result is a light and airy environment with a commanding view of the road and a versatile layout which showcases Bentley's craft and design language in an innovative and contemporary way," explained Braeckel.

Performance-wise, the Bentley SUV concept uses a 6.0-liter, twin-turbocharged W-12 engine that is mated to an eight-speed automatic transmission. The W-12 engine is capable of creating up to 600bhp and 800 Nm of torque. Because it is just a concept, the new 4.0-liter twin-turbo V-8 could also be used in its place. Bentley may even want to consider introducing a hybrid drivetrain before making it available to the public.

So when can the public expect to buy the Bentley EXP 9 F? Well, that depends on the type of reaction Bentley’s concept SUV gets at this week’s Geneva Motor Show. According to Bentley, public reaction will be analyzed following the motor show and further refinements will be made if necessary.

Stay tuned for more details of the Bentley EXP 9 F and customer reactions as they become available. The 82nd annual Geneva Motor Show takes place from March 8 to 18.