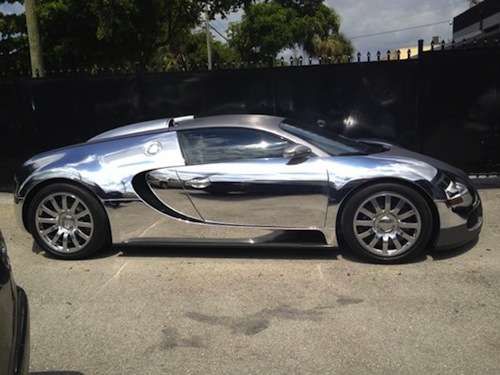 Rapper Flo Rida wraps Bugatti Veyron in chrome, then gets pulled over

The event marks the second time Flo Rida has been pulled over in his $1.7 million Bugatti.
Advertisement

Nowadays it seems almost atypical for a famous celebrity to not wrap their ultra-expensive ride in chrome. Whether it’s Justin Bieber’s chrome Fisker Karma or the chrome Audi R8 owned by Scott Disick, chrome is in. Well now rapper Flo Rida, whose real name is Tramar Dillard, has joined the party, wrapping his $1.7 million Bugatti Veyron in the ever-popular element. In order to trick out his Bugatti, Flo Rida sought the assistance of Metro Wraps, who released THIS VIDEO of the rapper’s car.

Unfortunately for Flo Rida, his newly modified Veyron may have attracted some unwanted attention, because he was pulled over by police in South Beach Miami on Wednesday evening. Flo Rida, who is known for such songs as “Right Round” and “Good Feeling,” was stopped outside of the Prime 112 restaurant.

Just last year, Flo Rida was busted for DUI while driving the same car (minus the chrome) in Miami. At the time of the incident the MC had blood shot eyes, exhibited slurred speech and had a blood alcohol content (BAC) of .185, more than twice the legal limit. To make matters worse Flo Rida was driving with a suspended license on the night of the episode.

In addition to his Bugatti Veyron, Flo Rida owns a Maybach, matte black Ferrari 458 Italia and the recently purchased Ferrari California, which is valued at around $200,000, not counting modifications.

For those interested in the Bugatti Veyron, it is a mid-engined grand touring vehicle, first introduced in 2005. The Veyron Super Sport is the fastest stree-legal production car in the world, touting a top speed of 268 mph. The Top Speed edition was named Car of the Decade by the BBC program Top Gear, while the standard version was awarded the title of Top Gear’s Best Car Driven All Year in 2005.

Aside from Flo Rida, a number of celebrities including Tom Brady, Simon Cowell, Tom Cruise, and Ralph Lauren are all confirmed owners of the Veyron.

John Goreham wrote on July 21, 2012 - 3:16pm Permalink
Must be tough on these folks. Who feel the need to scream "Look at me, look at me!" with their cars. Everyone knows the cool dudes drive sleepers...
deformer wrote on July 22, 2012 - 7:27pm Permalink
Regardless of how you feel about the celebrity, the car is still amazing. Bordering on a work of art without the chrome wrap, it's still a traffic jam everywhere that car is driven no matter who is driving it.