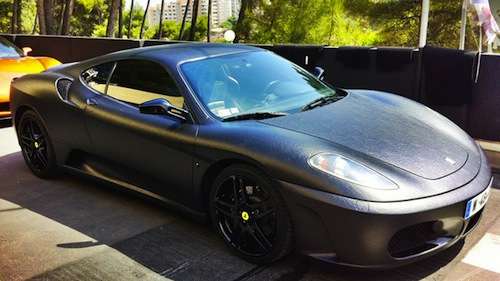 The rapper purchased the vehicle for $200,000 while in France.
Advertisement

Move over Justin Bieber, because you aren’t the only celebrity capable of turning their expensive sports car into an eye sore. The Game, born Jayceon Terrell Taylor, has just purchased a Ferrari F430 wrapped in leather for $200,000. The rapper purchased the F430 in France and posted a picture of him and the vehicle on his Instagram account.

The Game also included the following caption with the picture:

How eloquent huh? You would think after dropping $200,000 on a Ferrari, The Game might have actually learned how to spell it correctly. Although The Game may not be highly regarded by the grammar police, he is quite the car collector.

In a 2007 episode of MTV’s Cribs, The Game showed off his rides, which included a 2006 Bentley, 2006 Dodge Charger SRT, and a 2006 Lamborghini Murcielago. Two years later, while appearing in a video for Dub Magazine, The Game showcased three additional vehicles: a Range Rover, Chevrolet Corvette and a Can-Am Spyder.

Unfortunately for The Game, his collection appears to be dwindling. Just last year, TMZ reported that the performer’s Corvette was repossessed, because the lease had expired. Unaffected, The Game told TMZ, “I had the Corvette for like three years and it only had like 400 miles on it. I got so many whips.” Whether all of those whips are paid for is another question.

In the same TMZ interview, the cameraman pointed a Porsche Panamera, which The Game said was his. The only problem is that the he couldn’t even pronounce the car's name. After several failed attempts to say “Panamera,” The Game instead jokingly called it a “Peter Pan on 24s.”

As for The Game’s fellow celebrities with wrapped supercars, Justin Bieber has cited for driving 80 mph in his chrome Fisker Karma on the 101 Freeway a week ago. The pop star claimed that he was only speeding to flee the pursuing paparazzi.

Chicken Chin wrote on July 14, 2012 - 2:18pm Permalink
I have been hearing about the car that is wrapped in leather. Everyone is acting like that is something new. I have been having a 79 Cadillac Sedan Deville wrapped in PINK GATOR and a 95 Buick Road Master wrapped in Burgundy and Peanut Butter Boa for about 3 years now. I wonder where they get that idea from. HHHMMM By the way, the job was done in my garage as a project. Looks like a million bucks. LOL
Ness wrote on July 16, 2012 - 10:33am Permalink
are you serious? You have killed 'x'amount of gators and boas so that you can put it on a car? Damn that is one of the sickest things I have ever heard. As for The Game... How many animals were killed in this sick display of wealth?