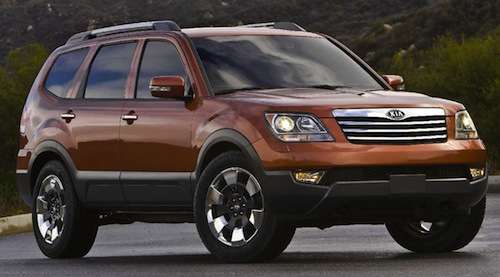 The safety recall is the automaker's fourth this year and second in two days.
Advertisement

Kia has announced the recall of 21,912 model year 2009 Borrego SUVS, manufactured from May 2, 2008, through January 20, 2009, due to brake issues. The recall affects Borregos equipped with non-adjustable brake pedals, because the vehicle’s pedal mounts may break off during a collision. As a result, drivers may have to stop the vehicle using the parking brake in the event of a crash, according to the National Highway Traffic Safety Administration. The NHTSA also states that the likelihood of a second impact and personal injury is increased due to the defect.

Kia will notify owners and dealers of the recall details beginning in June 2012. Kia customers will receive a new brake pedal mount, free of charge. In the meantime, Borrego owners can contact Kia Consumer Assistance Center at 1-800-333-4542. Concerned customers may also contact the NHTSA Hotline at 1-888-327-4236 or online at www.safercar.gov. The NHTSA Campaign ID Number is 12V245000.

Although still available overseas as the Mohave, the Kia Borrego was discontinued in North America in 2009 after just one year in existence. The Borrego was Kia’s first attempt at a full-size SUV. In 2011, the redesigned Kia Sorento mid-size crossover SUV officially replaced the Borrego.

Despite its lack of popularity, the 2009 Borrego received above average reviews, according to U.S. News Rankings and Reviews. Critics indicated that the Borrego contained one of Kia’s best interiors, spacious seating and a solid powertrain warranty. Additionally, the Borrego garnered great praise for its impressive safety features. The SUV earned a 9.9 overall safety score from U.S. News and received five star federal government ratings for occupant protection in all seating positions in both side and frontal crash tests.

Kia’s recall of the Borrego comes just one day after the Korean automaker recalled nearly 73,000 Rio sedans for an airbag defect. The news marks Kia’s fourth recall this year, with the two other recalls affecting over 145,000 Optima and Rondo models. Additionally, the Kia Sorento, the Borrego’s replacement, experienced a safety recall last September. The notice, which involved 10,631 Sorento SUVS, was due to a dangerous OCS airbag problem.

Despite this week’s recall announcements, the 2012 Kia Optima and Kia Sorento were just named to the “Best Family Cars of 2012” list complied by Parents magazine and Edmunds.com. The pair of vehicles earned spots on the list due to their affordability and safety features. In fact, both Kia models earned “Top Safety Pick” designations from the Insurance Institute for Highway Safety.