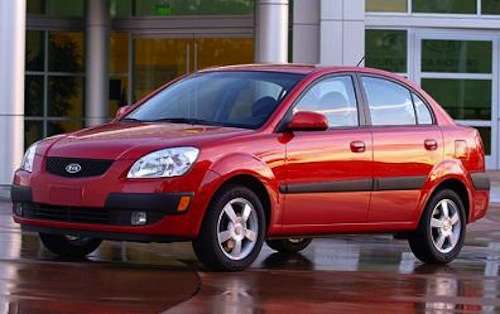 This is Kia's third airbag-related recall this year.
Advertisement

Kia has announced the recall of 73,000 of its 2006-2008 model year Rio vehicles, manufactured from February 20, 2005, through December 9, 2007, due to a dangerous airbag defect. According to the National Highway Traffic Safety Administration, the Rio’s front passenger seat occupant sensor mat may suffer from fatigue cracking. Such cracking will result in failure of the Occupant Classification System (OCS), meaning that it cannot detect child passengers. Consequently, the vehicle’s airbag system may fail to deploy in the event of a crash.

Kia will begin notifying Rio owners of the recall in July 2012. Owners of affected vehicles will receive a new OCS seat sensor, free of charge, from their Kia dealer. Concerned customers may contact Kia Consumer Assistance Center at 1-800-333-4542. For more information about the recall, contact the NHTSA by phone at 1-888-327-4236 or online at www.safercar.gov. The NHTSA Campaign ID Number is 12V244000.

U.S. News and Rankings reports that the Rio model years involved in this week’s recall performed moderately well in government crash tests and are considered “reasonably safe.” The 2008 Rio contains front seat, side-impact and head curtain airbags as a standard feature. U.S. News concluded that such safety features make the Rio “one of the cheapest cars to come with this important safety gear on every model.”

Kia’s airbag recall is not exclusive to the Rio model. In January, Kia recalled 145,000 Optima sedans and Rondo MPVs to address defective airbags. According to the NHTSA, affected vehicles were built with a faulty clock spring in the steering column, which may break over time. As a result, the airbag may not deploy during a crash.

Notwithstanding this year’s recalls, Kia continues to set record-breaking sales every month. In fact, Kia Motors America has established a new monthly sales record for 21 months in a row.