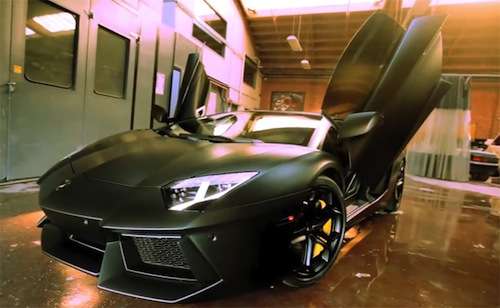 The rapper recently modified his $750,000 sports car, which was a birthday gift from girlfriend Kim Kardashian.
Advertisement

It’s no secret that Kanye West loves to be in the spotlight. So it’s not a surprise that West felt the need to revamp his Lamborghini Aventador to keep up with his fellow rap compatriots. The “Mercy” rapper has decided to change his Aventador from a glossy black finish to matte black. The transition from glossy to black was made possible by Platinum Motorsport.

The alteration comes just shortly after rapper Florida decided to wrap his Bugatti Veyron in chrome and The Game opted to purchase a leather-wrapped Ferrari.

West revealed the first image of his new matte black Aventador earlier this week on Twitter. Despite being quite the attention-grabber, the car is given a run for its money in the picture due to the presence of West’s girlfriend Kim Kardashian.

It’s only fair that Kardashian be present in photos with the Aventador since she is the one who bought it. Kardashian purchased the $750,000 gift for West for his 35th birthday in early June.

The two-door Aventador goes from zero to 60 mph in just 2.8 seconds and has a top speed of 215 mph. The sports car also touts a 6.5-liter L539 V12 engine and a 7-speed ISR Automated Manual transmission.

Not to be outdone, Kardashian has owned a number of exceptional rides like a Bentley Continental GT, Range Rover HSE, Ferrari 458 Italia, and a Rolls Royce Phantom. Kardashian has also been known to get behind the wheel of her significant other's car like West’s Aventador and ex boyfriend Reggie Bush’s Ferrari F430.

Cars aside, the couple has recently made headlines over West’s new song, which is dedicated to Kardashian.

"The song talks about how he was with so many other girls but could never find the right one until he met me" said Kardashian, according to TMZ.