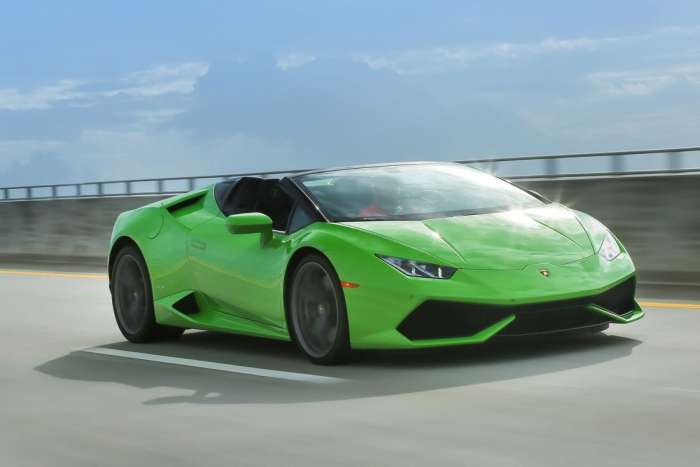 It Has Been A Rough Year For Lamborghini And Burning Huracans

After looking things over closely, Torque News can say that it has been a lousy year for Lambo Huracan Spyders and fires. One of them could be related to an earlier recall, but that is speculation, the others (three that we could count in total) were just bad luck.
Advertisement

It has been a lousy year for Lamborghini Huracans. Since July at least three have burned up for a variety of causes. And at least one other was destroyed when a driver, perhaps three sheets to the wind, managed to get his Lambo Huracan lodged under a Honda Civic – he survived without a scratch.

The latest fire occurred in Boston just last week. Although there were two reports, this is what Torque News has learned about the blaze after some research.

One version of the story has the owner seriously overrevving the 510 horsepower V-10 engine as the vehicle sat outside the Boston Public Library in historic Copley Square.

As the engine overrevved, it generated a humungous amount of heat. And, since there was no airflow over the mid-engined supercar, the warm air built up. Eventually, the superheated exhaust caught fire, and it turned the Lambo into a fireball.

Very Little Left Of The Vehicle

The Boston Fire Department responded, and they had to dig through the Lambo to put the fire out. About the only things that were left were significant parts of the body and frame. There was no report about the V-10 or the rest of the driveline.

TN has also researched the situation and found there was a for the cause of the inferno. Autoevolution speculated that the catalyst overheated and caused the fire. Torque News could not confirm the second theory.

However, it is interesting to note that automaker recalled a series of Lambos in 2014-15 for significant fires. It seems the issue was conflagrations caused by gasoline that was sprayed on hot exhausts, causing the vehicles to catch fire.

Lambo had to recall every one of the Aventador models affected to implement a fix. Since the cause was similar to the fire in Boston, it might be a good idea for Lambo engineering to take a close look at the exhausts of Lambo Huracan Spyders to make sure everything is okay.

Meanwhile, about three months ago, a Lambo Huracan Spyder burned to a crisp at a Missouri gas station. To everyone except, probably, the owner, the whole event seems like a comedy of errors.

It seems a pair of Lambos that had just taken part in the Boston to Las Vegas Gold Rush Run were heading home when the drivers decided to pull off the road in search of some water.

As they were enjoying their water, a family-style minivan pulled into the self-service gas station, and the owner proceeded to begin gassing up his ride. After topping off, the van drove, but it had the pump hose still attached to the vehicle.

Gas Sprayed All Over The Place

Of course, the hose broke and started spraying gasoline all over the place, including the hot exhaust of the Huracan. The Lambo caught fire and burned ferociously.

Fortunately, there was no one aboard the Huracan and so the vehicle, which caught fire quickly and burned rapidly. It was soon a mass of twisted frame and body panels, as well as the drivetrain. It was a mess.

Fortunately, the fire department was able to put things out quickly and kept the fire from spreading. The second Lambo that had pulled in with the trashed Huracan Spyder was undamaged.

Police managed to track down the driver of the minivan, settling the issue rapidly.

About the only one who was displeased was probably the owner of the $400,000 supercar as the fire trashed the Lambo. Like as not, he also had to pay for the ramp truck that picked up the charred wreckage and took it home.
Finally, in the U.K. not too long ago, the employee of a dealership was driving his boss’ Huracan when he seemed to forget what to do behind the wheel absolutely everything. Well, the guy was stoned out of his gourd as a blood test confirmed.

As an employee of the dealership, he was authorized to get behind the wheel. However, we believe he could only use the Lambo if he were sober, not drunk and high on cocaine. And, though he started the incident as an employee, we think he was probably asked to leave.

Interestingly, the driver told police, after he managed to put the car into a row of stairs and handrails, that he used the car to pick up his daughter at school. We doubt that he will be doing this again soon.

So, what was the toll for the stoned driver? Among other things, the thoroughly unamused judge awarded the driver 150 hours of public service work for his efforts.

And, finally, we will recount the story of the Lambo that managed to get lodged under a Honda Civic. That’s right, under a Honda Civic, which was quite a feat. Now, you would imagine that would do quite a job on the driver as there is precious little room under the Civic. However, when responders pulled the vehicle out from under the Honda, they found the driver was outside the supercar as was his passenger, who walked home.