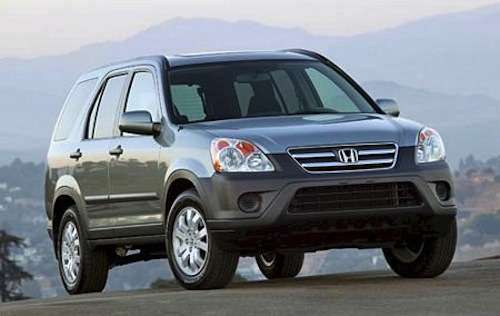 The CR-V recall marks the automaker's third large recall in less than a week.
Advertisement

Honda has announced it is recalling model-year 2002 to 2006 CR-V crossovers due to a dangerous fire risk. The recall notice states that the vehicle’s driver-side power window switch may fail or melt. Consequently, the failed switch may overheat, smoke, and result in a fire. According to Honda, the problem occurs when rain or other liquids enter the driver’s open window, thus damaging the master power switch.

Due to the fire risk, the National Highway Traffic Safety Administration is advising owners to park their CR-V outside until the recall has been performed. The recall affects 268,655 SUVs manufactured from February 19, 2002 through July 28, 2006. Although there have been no injuries or crashes associated with the defect, Honda says that four fires have been reported.

Honda will begin notifying customers of the recall on, or about November 2, 2012. Honda dealers will inspect and repair the switches, free of charge. In the meantime, owners may contact Honda at 1-800-999-1009 or the National Highway Traffic Safety Administration Vehicle Safety Hotline at 1-888-327-4236. The NHTSA Campaign ID Number is 12V486000.

No stranger to substantial recalls, over 166,000 model-year 2012 CR-Vs were involved in a door latch recall in July. Stemming from a cable mechanism failure, the door lock issue may result in a door opening while driving or during a crash, according to the NHTSA.

Additionally, Honda recalled model-year 2002 to 2004 CR-V vehicles in March due to lighting concerns. In particular, affected CR-Vs and Pilot SUVs contained a headlight switch defect that may cause the low beams to malfunction.

Unfortunately for Honda, Saturday’s recall is the third in just a week for the automaker. The announcement comes two days after the automaker recalled over 820,000 Honda Civic compact cars and Honda Pilot SUVs over a headlight issue. The safety recall was an expansion of the March recall, bringing the total to nearly 1.4 million vehicles. Earlier this week, Honda issued a recall for nearly 600,000 model-year 2003 to 2007 Accord sedans due to a power steering hose defect as well.