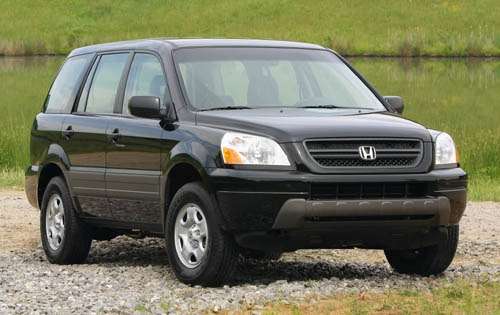 The newly announced recall is an expansion of March's recall, which concerned over 550,000 CR-V and Pilot SUVs.
Advertisement

Honda is recalling over 820,000 Civic compact cars and Pilot SUVs due to a headlight defect. According to Honda, the wiring connecting a headlight control switch may overheat and melt, thus causing the low-beam headlights to fail. Not surprisingly, the loss of headlights may limit the driver’s ability to see the road and increases the risk of a crash. The recall affects model-year 2002 and 2003 Civics and Pilots from 2004 and 2005. No crashes or injuries have been reported, says the automaker.

Honda says it began notifying owners of the recall last month. The automaker will fix the wiring problem for free on affected vehicles. Customers who yet to receive a recall notice may contact Honda Customer Service at 1-800-999-1009 or online at www.recalls.honda.com. Concerned owners may also contact the National Highway Traffic Safety Administration, whom is handling the recall, at 1-888-327-4236.

The affected 820,000 vehicles have been added to Honda’s previously announced headlight recall, which was announced in March. The March recall concerned over 550,000 model-year 2002-2004 CR-V small SUVs and 2003 Pilots.

The NHTSA initially began investigating the headlight problem last spring. The agency received 34 complaints related to the problem prior to launching the investigation and 12 complaints after beginning the probe. The NHTSA has not released the number of complaints it has received in regard to the 2002-2003 Civic and 2004-2005 Pilot recall.

Thursday’s massive recall expansion comes just days after Honda expanded another recall. On Monday, Honda announced that it would expand its recall of the Acura TL sedan to include 572,000 model-year 2003-2007 Accord V6 vehicles. Affected Accords and TLs may contain a faulty power steering hose that may deteriorate and leak fluid. Consequently, this could lead to loss of steering control and/or a fire due to the fluid leak.

Unfortunately for owners, recall repairs must wait until next year because Honda does not have enough parts to fix the problem. The automaker is expected to obtain the updated power steering hoses in early 2013.