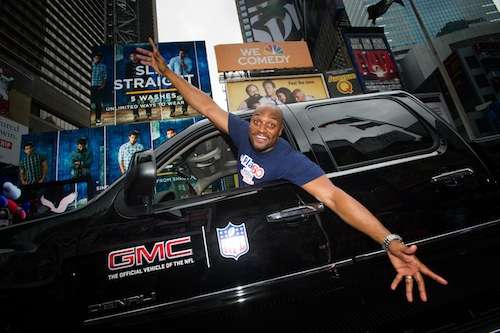 The massive Sierra fleet was unveiled ahead of tonight's game between the New York Giants and Dallas Cowboys.
Advertisement

Football fans and automotive enthusiasts alike rejoiced yesterday as GMC helped jumpstart the 2012 NFL regular season at the NFL Kick-off event in New York City. In order to celebrate the start of the regular season the automaker revealed a fleet of 33 GMC Sierra fullsize pickups in Times Square, each containing logos of the NFL and its 32 teams.

“GMC and the NFL share an image founded on toughness and durability,” said Craig Bierley, GMC advertising and promotions director. “Just as the football season ahead will showcase players stretching the limits of athletic ability, GMC vehicles are engineered for performance and longevity.”

So just how impressive was this cavalcade of Sierra pickup trucks? According to GMC, the 33 Sierra 5.3L V-8 vehicles represent 63,924 pounds of payload, which is the equivalent of 67,162 footballs. Additionally, the multitude of pickups possesses the towing capacity of 320,100 pounds or the weight of 1,067 NFL linemen at 300 pounds each.

Tuesday’s NFL Kick-off event is just the start of GMC’s involvement with the NFL this season. GMC will be a weekly fixture throughout the 2012 regular season thanks to its “Never Say Never” campaign. The unique campaign allows fans to vote on their favorite plays of the week and communicate with NFL stars through various social media outlets.

The Never Say Never promotion also includes a contest aspect, which gives fans the chance to win a GMC vehicle of their choice, Monday Night Football tickets, or tickets to February’s Super Bowl. GMC expects participation in the Never Say Never campaign to be widespread, as the NFL fan base is comprised of approximately 181 million people. NFL fans can learn more about the contest at www.nfl.com/gmc.

Aside from being the “Official Vehicle of the NFL,” GMC is the official vehicle of ESPN’s Monday Night Football, the Carolina Panthers and the Denver Broncos.

The 2012 NFL regular season kicks off tonight as the Dallas Cowboys face off against the New York Giants. The matchup marks the first time the NFL has held a regular season game on a Wednesday in 64 years.