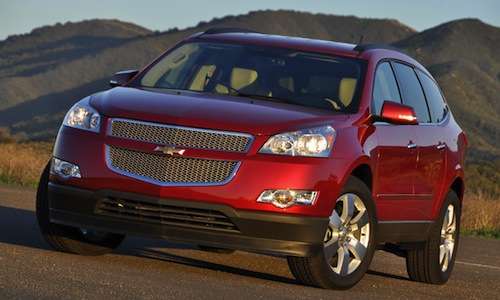 The sizable recall is due to a possible windshield wiper defect.
Advertisement

General Motors has announced the recall of 50,001 2011-2012 Chevrolet Traverse, Buick Enclave and GMC Acadia SUVs due to a possible windshield wiper defect. Specifically, the wiper arm may loosen or become inoperative due to snow or ice buildup on the windshield. The consequence of such a problem is reduced visibility, which may increase the likelihood of a crash. GM states that the defect has not caused any crashes or injuries thus far. This week’s recall is the first for the 2012 Enclave, Acadia and Traverse.

GM’s three midsize SUVs all rank high on U.S. News list of Best Affordable Midsize SUVs in 2012. The GMC Acadia ranks 10 out 23 with an overall score of 8.0. The 2012 Acadia earned high marks for it performance, roomy interior, third row seating and aggressive styling. Despite the praise, the Acadia lost points for its mediocre 5.0 out of 10 reliability score from J.D. Power and Associates.

On the contrary, GM’s other midsize SUVs, the 2012 Buick Enclave and the 2012 Chevy Traverse, finished tied for the top spot on U.S. News’ annual list. Both vehicles earned an overall score of 8.4. The Enclave was recognized as a “comfortable, luxurious and capable family hauler,” while the Traverse was acknowledged for its practicality and family-focus. Both vehicles were also commended for their solid fuel economy, each possessing a 17/24-mpg. As was true with the Acadia, the major downside with the Enclave and Traverse was its average reliability rating of 6.0 according to J.D. Power and Associates.