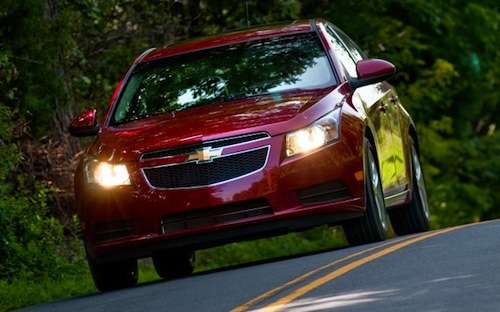 The substantial recall was issued due to an under-shield engine problem, which may result in a fire.
Advertisement

General Motors Co. has just announced the massive recall of nearly 500,000 of its compact Chevrolet Cruze sedans due to under-engine shield concerns. Chevy reports that affected vehicles require under-engine shield modification so that flammable liquids do not get trapped in the engine compartment. Potentially, trapped engine fluid could result in a fire. Specifically, the recall states that 475,418 model-year 2011-2012 vehicles are affected. The majority of the sedans, 413,418 were sold in the US, while 61,299 were sold in Canada and 701 in Israel. There have been no crashes or injuries reported thus far in association with the recall.

Although no injuries have been reported, GM states that is has received 30 reports of engine fires relating to the Cruze. The recall occurs in the aftermath of a federal investigation that opened in April involving 2011 Cruze models. The National Highway Traffic Safety Administration investigation was later expanded to also include 2012 models.

Cruze owners will begin receiving recall notices by mail starting in mid-July. Chevy dealers will fix the problem; free of charge, in a quick repair that takes roughly 30 minutes. Meanwhile, anxious owners can contact Chevy Customer Service at 800-222-1020 or online at Chevrolet.com. Concerned drivers may also contact the National Highway Traffic Safety Administration at 1-888-327-4236 or go to www.safercar.gov.

Perhaps the federal investigation has affected the appeal of the best-selling Cruze, because its May sales figures took a dip compared to its impressive sales earlier in the year. Although GM’s overall sales grew 2.4 percent, Cruze sales dipped 20.3 percent. Chevy managed to move just 19,613 Cruze models compared to 22,711 sold in May 2011. Last year, the Cruze had spent four months as the number one seller in the WardsAuto Upper Small segment, but has since fallen to fourth behind segment favorites like the Toyota Corolla and Honda Civic.

The 2012 Chevy Cruze currently ranks 6 out of 41 on US News Rankings and Reviews list of Affordable Small Cars, with an overall 8.5 out of 10 score. Reviewers praised the Cruze for its superior fuel economy, roomy interior, quality and upscale feel. Consumer Guide stated, "Chevrolet has produced a well-rounded compact sedan that easily holds its own with the best entries in this class.” For this reason, the 2012 Cruze earned the title of Best Compact Car for the Money, according to US News.

Anonymous wrote on June 22, 2012 - 8:56pm Permalink
[LOL] best compact for the money so much for all the rewards all the mags have been giving it, buy a chevy and you'll get what you pay for robbed of your tax money and a recall . time to discontinue this junk and call it somthing else
Anonymous wrote on August 16, 2012 - 5:06pm Permalink
Add to that all the crappy shifting 2011 Cruzes that GM will not address once and for all!

Panasonic Updates Profit Forecast, Noting How Much Tesla Batteries Help The Jump
2022 Porsche 911 GT3 Laps Nurburgring in 7:04 With Journalist Behind The Wheel
END_OF_DOCUMENT_TOKEN_TO_BE_REPLACED