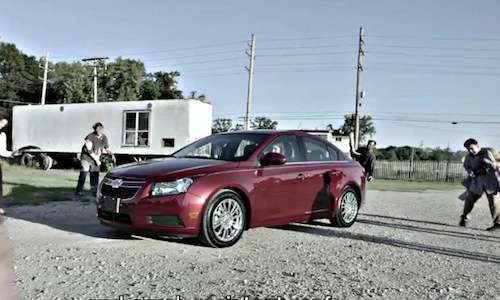 Chevy Cruze: The car most feared by zombies [video]

The all-new Chevy Cruze is one versatile vehicle. It ranks 6 out 41 Affordable Small Cars according to U.S. News and was named the Best Compact Car for the Money. So is there anything the 2012 Cruze can’t do? Apparently not, because Chevy’s new ad campaign illustrates how the Cruze can ward off hoards of zombies.

The Cruze’s amusing ad launch features a newscaster interviewing a zombie about his dislikes. What sits atop the zombie's list of pet peeves? Well, it’s the Chevy Cruze of course. The groaning zombie tells the reporter (via subtitles), “We hate the Chevy Cruze.” First, zombies hate the Cruze for its handling capabilities. The commercial then shows the Cruze comfortably circling around a group of the undead. Next up is the Cruze’s high-strength safety cage, which is able to keep the bloodthirsty zombies at bay. Lastly, the Cruze’s fuel economy allows the compact car to bypass gas stations loaded with zombies.

The two-minute spot concludes with the tagline: The car most feared by zombies. Chevy also encourages people to visit its zombified Facebook campaign to describe how he or she plans to survive the zombie apocalypse.

Chevy is not the first automaker to cash in on the recent zombie craze via advertising. Back in 2010, Toyota released a commercial that showcased the Toyota Corolla as a zombie-fighting machine. The ad featured a couple watching a zombie film in which it appears the main character may be facing his imminent doom. That is, until the Corolla comes to the rescue, leaving a slew of zombies in its dust.

Aside from zombie ads, Chevy previously launched a popular Super Bowl ad in 2011 featuring a group of senior citizens at a nursing home misinterpreting a Cruze commercial. The elderly group, which is hard of hearing, misunderstands the commercial’s slogans like “42 miles per gallon” and “Eco,” all in amusing fashion. Check out the ad HERE.

As previously mentioned the 2012 Chevy Cruze ranks in the top 10 Affordable Small cars according to a U.S. News analysis and earned the website’s prestigious Best Compact Car for the Money award. The Cruze received an overall score of 8.5 out of 10 based on 44 published reviews and test drives. The vehicle earned praise for its impressive fuel economy, roomy interior and upscale feel. Reviewers also liked the Cruze’s numerous tech features including Bluetooth, steering wheel-mounted audio controls and now standard USB port.