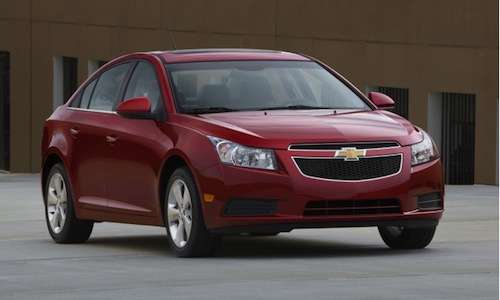 The NHTSA has announced an upcoming probe into consumer reported fires in 2011 Cruze and 2010 Wrangler models.
Advertisement

The National Highway Traffic Administration has announced that it will be investigating consumer reports of fires in the Chevrolet Cruze and Jeep Wrangler. Although no injuries have been reported, the fires completely destroyed six vehicles. In particular, the NHTSA is examining the 2011 model year Cruze and the 2010 Wrangler.

Customer complaints indicate two reports of fires in the 2011 Cruze, both of which resulted in the vehicle becoming engulfed in flames. One Cruze owner described the incident as follows: "The car was totally engulfed within five minutes of stopping, and it was only after the first sign of fire was visible that the warning light on the dashboard illuminated."

The owner explained the situation to NHTSA stating, "Once out of the Jeep I looked under it and saw and unknown liquid burning down to the ground from the engine area. I attempted to extinguish the fire with water but I was unsuccessful. Within minutes it was a total loss.”

Spokesmen from both General Motors and Chrysler Group have issued statements acknowledging the investigations. Even though Chrysler spokesman Nick Cappa states that the automaker is complying with the probe, he also argued, "The 2010 Jeep Wrangler meets or exceeds all applicable federal safety standards and has an excellent safety record.” Chrysler reports selling 131,000 2010 Wrangler models and GM indicates selling roughly 177,000 Cruze vehicles.

The 2011 Chevy Cruze earned high marks in safety from the federal government and insurance industry upon its release. The Insurance Institute for Highway Safety named the 2011 Cruze a “Top Safety Pick” and gave the car a “Good” rating in front, side and rear crash tests. In terms of federal scores, the 2011 Cruze garnered the highest possible grade in overall safety rating. The Cruze also earned a five-star rating in front and side crash tests.

The 2010 Jeep Wrangler fared a bit worse in overall safety scores averaging just a 6.9 out of 10 according to U.S. News’ Car Rankings. The two-door 2010 Wrangler received a five star federal government ranking in frontal crash test scores, but earned just a three-star rollover score. In effect, the Wrangler has a 27 percent chance of rollover. The Wrangler also suffered due to side-impact air bags being optional and side-curtain air bags being unavailable.