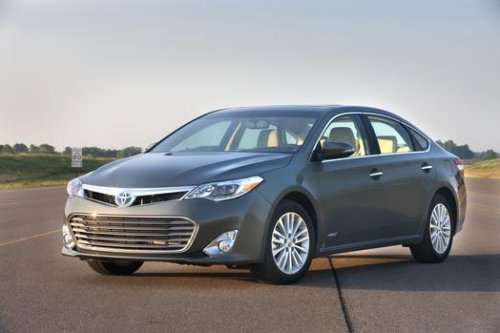 The all-new 2013 Toyota Avalon will have a hybrid option with a 40mpg combined EPA rating.
Advertisement

A totally new Avalon is coming in 2013 and Toyota has finally released design details including a surprise: it will include a hybrid option. The premium mid-sized sedan will come in a choice of a top-level V6 gasoline engine or a Hybrid Synergy Drive option with an efficiency rated by the EPA at 40mpg average.

The new look of the Avalon is strong, following through on current-generation style with a bolder, more refined appeal. It's design and engineering are North American-focused and were accomplished by design teams in Southern California and Michigan. The car will be built at Toyota's plant in Georgetown, Kentucky (TMMK).

Exterior dimensions change from 2012 with a near-2 inch length reduction and half an inch of width reduction. Height drops by an inch to 57.5 inches, but the wheelbase remains the same, explaining the new design's more sporty drive. Much of the length changes come from front and rear overhang reductions and the overall size reductions mean a curb weight drop of about 150 pounds for the V6 and 20 pounds for the Hybrid XLE option from the current model.

Inside, the Avalon will include a forward-looking technology base now being popularized in all of Toyota's top-level vehicles and advanced power trains. Safety features have been updated to current-generation and other refinements to match the car's premium quality have been added.

The power plant under the hood in the standard V6 is the well-proven, all-aluminum 3.5-liter DOHC coupled to an efficient 6-speed automatic transaxle. The engine puts out 268 horsepower and 248 lb-ft of torque giving the car a 0-60 time of just under 7 seconds. Fuel economy is improved and new handling options taken from Toyota's other premium sedans in the Toyota and Lexus lines will be included so that drivers can choose from ECO, NORMAL and SPORT modes to enhance the driving experience as desired.

The Hybrid XLE version of the Avalon is also based on Toyota's well-tested Hybrid Synergy Drive system. A smaller 2.5-liter Atkinson-cycle 4-cylinder engine is coupled to an electric motor through a DC-DC converter and a nickel-metal hydride (NiMH) battery pack. This system puts out a total of 200 horsepower and achieves 40mpg in the city and 39mpg on the highway in ECO mode.

Under low-speed conditions for short distances (one mile or less), the Avalon Hybrid can travel all-electric for quiet operations in residential areas or parking garages.

The 2013 Avalon will enter showrooms later this year. Toyota has not yet released pricing.