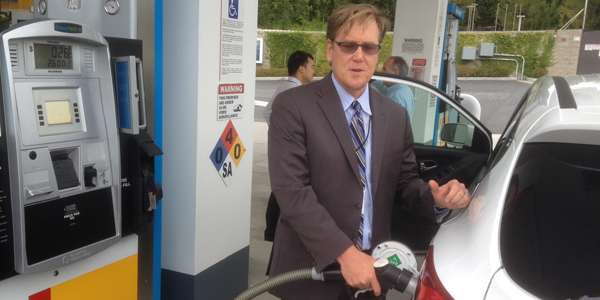 12 Things Good and Bad About the Hyundai Tucson FCV

Hyundai introduced the Tucson Fuel Cell Vehicle at a simple first customer ceremony and media drive event in Tustin, California, and after some time behind the wheel and talking to the experts, it's safe to say there are good and bad things about this new vehicle.
Advertisement

GOOD: The United States has the first-ever retail Hyundai Tucson FCV delivery in the world. It's built in Korea but we beat out Asia and Europe for bragging rights.

BAD: You can only lease it as discussed in our previous story, 5 Facts About the Tucson SUV and you can only drive it in Southern California because there aren't enough fuel cell stations anywhere else – including Northern California.

GOOD: Unlike a traditional electric vehicle, there is no range anxiety. You can get 265 miles from a full tank and refill in less than 10 minutes. Based on EPA numbers, you get about 380 miles from a gas Tucson model at a combined 25 mpg in the 15.2 gallon tank.

BAD: It's expensive until Hyundai puts a lot of money on the table. Hyundai Motors America president and CEO Dave Zuchowski said the Tucson FCV costs $49,999. A similarly equipped gas model costs about $27,000. Hyundai sweetens the pot with a $499 per month lease after $2999 down and free fuel for the three years of the lease. Otherwise, at this point, it makes no fiscal sense to drive a Tucson FCV.

Also see: How Hyundai Proves That Last Can Be First in Safety With Its Tucson Crossover

GOOD: Its fuel economy is strong at 51 miles-per-gallon equivalent on the highway. The gas version gets 29 mpg on the highway when equipped with the six-speed automatic.

BAD: The hydrogen storage system, which rests in the rear of the Tucson, is creepy looking. It looks like something from a bad sci-fi thriller from the '70s. Then again, we did spend time with a prototype model. Maybe it's prettier in the production models.

GOOD: You might be able to rent one from Enterprise in the future. A Hyundai PR rep said talks are taking place to add them to a rental car fleet. Stay tuned and book a flight to So Cal when they become available.

BAD: You'll still need another vehicle if you want to venture beyond Southern California. Tim Bush, who took home the first Hyundai Tucson FCV, admitted as much. It's not a roadtrip vehicle if you plan on venturing more than 120 miles from home.

GOOD: It's really quiet to drive. There's like no cabin noise at all.

BAD: You may get free fuel, but you only can drive 12,000 miles a year under the lease terms. That's roughly 45 tanks of fuel a year or savings of about $1800 a year (Hyundai says gas vs. hydrogen costs should be roughly equivalent per mile). Is free fuel worth it if it means a cap on miles driven? Then again, you can only drive around So Cal so maybe it's not an issue.

GOOD: Carpool lane access in Southern California. That alone is worth the added price for most folks.

Is the Tucson FCV the wave of the future? It should be but it's going to take a lot of government investment in refueling stations to make it happen. Right now, from a financial standpoint, it doesn't make sense to own one without sweetheart incentives from the manufacturer – and Hyundai has some sweet incentives like the free fuel and maintenance and a free loaner if it needs serviced.

Lease one if you're eligible and want to make a statement for a domestic, earth friendly alternative fuel vehicle. Don't lease it if you’re looking to save money because you probably won't.

Check out the debut expected demand of Hyundai Tucson FCV.