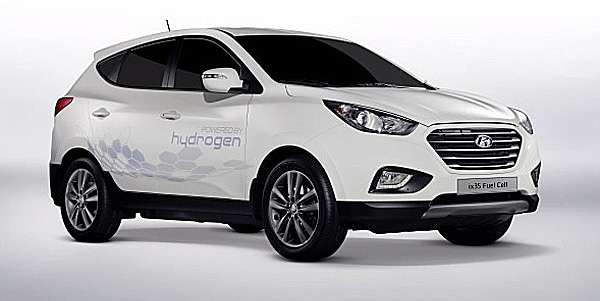 Hyundai Tucson Fuel Cell Vehicle Debuts - Will Demand Be There?

The 2015 Hyundai Tucson Fuel Cell Vehicle debuts tomorrow, June 10, at Tustin Hyundai, 16 Auto Center Dr., Tustin, California, as the first customer gets ready to pick one up. Initial demand was strong but will customers continue to knock on Hyundai's door for the vehicle?
Advertisement

What's going to be the strong selling point for the Tucson FCV is the free fuel for the life of the consumer's lease as well as valet maintenance but that's balanced against a $499 per month fee. According to Hyundai, "Under the … leasing program, approved lessees can drive Hyundai’s next-generation Tucson Fuel Cell for $499 per month, including unlimited free hydrogen refueling and 'At Your Service' valet maintenance at no extra cost. For the first time, retail consumers can now put a mass-produced, federally-certified hydrogen fuel cell vehicle in their driveways, with availability at three select Southern California Hyundai dealers: Tustin Hyundai, Win Hyundai in Carson, and Hardin Hyundai in Anaheim.

Another plus to the Tucson FCV is its lack of range anxiety. Unlike a traditional electric vehicle – and deep down that's what a fuel cell vehicle is – you won't have to worry about range. It will have a range of about 300 miles, just like most internal combustion engines currently do. Even the best electric vehicles are going to get you about 100 miles of range. By the way, that range is fine for most drivers 90 percent of the time but Americans don't think that way.

The only downside is when this vehicle goes on sale in the spring it is only going to be in Southern California. There's not a public infrastructure outside of California on a meaningful scale right now. California does plan to add 100 stations between Los Angeles and San Francisco, though, which will really open up the marketplace for hydrogen vehicles. That's a strong reason companies are bringing them to market.

Probably the best reason to buy a hydrogen fuel cell vehicle is the United States is way over capacity. We actually export it. It totally decreases our dependence on other countries for fuel. Plus, methane can be used to create hydrogen. As long as we have flatulent cows, we'll have hydrogen and I don't see Americans going vegetarian any time soon. (And, garbage dumps are another excellent source of methane).

So, if you live in Southern California, will you be hankering for a Tucson Fuel Cell Vehicle? Torque News will be driving it at the debut. Will let you know if it's a risk worth taking to make the leap into this alternative fuel source vehicle.