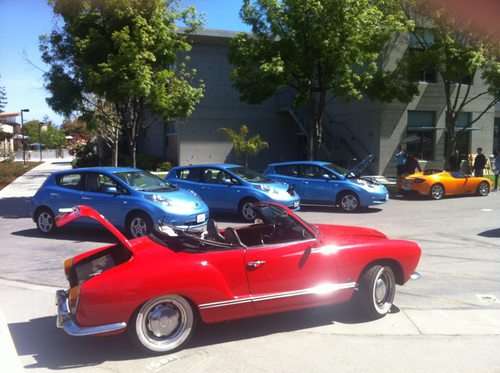 The Earth Day fairs this week were popular places for electric car enthusiasts to gather and show their cars to others, these are the questions heard over three days of earth day activities this week.
Advertisement

It's Earth Day weekend and electric vehicle owners across the country have been invited to come to Earth Day fairs to show off their cars. Whether or not they are aware of it ahead of time, an electric car owner buys for themselves the role of electric car ambassador. Usually this happens in the normal course of life in the parking lot when someone approaches exclaiming "An electric car! How cool!" and starts asking questions. And then there are those special occasions such as Earth Day celebrations, or an Easter parade, where the local electric car enthusiast club organizes a public showing. It's all a chance to show your electric car to neighbors, educating them person-to-person about living with electric cars.

The last three days, as an electric car owner (a 1971 Karmann Ghia electric car conversion), I've gone to three separate Earth Day fairs and talked with a lot of people. You don't have to wait until the next Earth Day to see electric cars. There are groups of electric car enthusiasts all over the country. The Electric Auto Association has nearly 50 years of history, with its members having constructed thousands of electric vehicle conversions. EAA chapters tend to hold monthly meetings, and are open to newcomers asking questions. Additionally owner groups for both the Nissan Leaf and Chevy Volt are springing up across the country.

Here's a few of the questions heard over the last three days:

How fast, how far, how long to recharge are the most common questions we are asked. The answer depends on the design of a specific electric car. All the electric cars available today travel easily on the highway, at highway speed, with great acceleration. The range and recharge time depends on the specific car, the battery pack capacity (in kilowatt-hours), the power of the charging unit (in kilowatts), and the charging ports on the car.

The Mitsubishi i-MiEV and Nissan Leaf have an optional different charging mode, fast charging. If you can find a CHADEMO compatible charging station (these are just beginning to roll out in several places such as Chicago, California, and especially the San Francisco Bay Area) these fast charge stations can take the car to 80% of a full charge within 20-30 minutes.

When will there be an electric car with 400 miles range, costing the same as a gasoline car? Many people believe that before electric cars can be successful they must be capable of exactly replacing the current capabilities of gasoline cars. That means 300-400 miles of driving range, pop into a station for a quick fillup while you take a pee break, and you're back on the road.

The short answer to the question is, several years still. Battery capacity and costs will eventually converge to support a 300-400 mile range electric car with quick recharge capability. Some recent announcements from IBM's Battery500 project, Envia Systems, General Motors, and PolyPlus all promise future battery technology offering higher energy density and lower cost, but a few years into the future.

Starting in July, Tesla Motors will begin selling the Model S, an all electric luxury sedan that has a range of 300 miles. It offers a range of recharging solutions including a fast charging station which will recharge the Model S in an hour. While this amazing technology is pretty much the requested 300-400 mile range car that recharges in a jiffy, it also costs almost $80,000. Battery capacity and costs have not yet converged, but what Tesla is doing is proving that long range electric cars are possible. Coda, Ford, GM, Mitsubishi, Nissan, they all are manufacturing electric cars today, but the 100 miles or so range each has is dictated by the cost of the battery pack.

Is the 300-400 mile range recharges in a jiffy electric car, what we really need in normal daily life? Research shows the typical driver travels less than 40 miles a day, and the long road trips are few. There are exceptions, the people who drive 200 miles a day or more, but the average daily driving is much less. The cars at the non-Tesla end of the spectrum, with a 100 mile or so range, will work extremely well for the daily commute, or for running errands around town. Many families will have two cars (or more), one can be electric, and another can be gasoline driven for the long range trips.

The Chevy Volt offers an interesting compromise between all of these. It has a 35-50 mile electric range, and a gasoline generator that kicks in when the battery pack is depleted. The Volt's range is extended by the gasoline stations, or by electric car charging stations. Chevy Volt owners routinely take 3000 mile long trips that make owners of pure electric cars green with envy.

How do long range trips work with a short range vehicle? It, today, requires some planning and awareness of the location of electric car charging stations. Unless you own a no-compromise-electric-car from Tesla Motors, your range will be around 100 miles. The way to measure recharging speed in an electric car is the number of miles of range added per hour of charging. That speed determines the ability to take a long-range electric car trip.

The Nissan Leaf and Mitsubishi i-MiEV are theoretically the best for long range trips because of the CHADEMO compatible charging port. You pop into the CHADEMO station, and 20 minutes later are back on the road. That's 60 miles or so range per half hour, or 120 miles per hour of charging.

Among the cars that do not support fast charging, the best bets are the Ford Focus Electric or Coda Sedan, each of which have 6.6 kilowatt charging support. These give 20-25 miles of range per hour of charging, and for example a team organized by Mens Health Magazine is currently running a cross-country trip in a Ford Focus Electric.

When will there be an electric SUV? The first known electric SUV from a manufacturer will be the Tesla Model X, intended to go into production in 2013. See: Tesla reveals the Model X, an all-electric SUV that's faster than a Porsche 911

The car required a year of work to do the conversion, and the parts cost about $10,000. The range is about 50-60 miles, and it goes highway speeds at up to 80 miles/hr. The recharge time from completely discharged is 7-8 hours. Karmann Ghia's can be completely gorgeous, and my car is beautifully restored and people stop to gawk at it all the time.

The basic steps are to remove all the gasoline parts, while being careful to mark which wires require a 12 volt input, then install an electric motor, bolting it to the transmission using an adapter plate, install a battery pack, the controller, and other bits of wiring. Everything can be done in a home garage. You may want to work with the sort of auto repair shops which do custom work, and there are a few specialty shops around the country that can do the job for you.

Why would one do a conversion versus buy a manufactured car? Maybe you have a love for a specific kind of car, which the electric car manufacturers simply aren't making. My Karmann Ghia is an example where there is still a large community that loves old school VW's and want an electric old style VW. The same holds true with the early Mustang's, the BMW's, the old Triumph Spitfires, or Alfa Romeo's, or any of several dozen other cars that still have a loyal following today.

Another reason to do a conversion is if you like to tinker and build things. Building an electric car is a lot of fun. It's not for the faint of heart, either. The most fun is the first time you assemble everything and take it for a test ride around the block. The wiring is probably jerry rigged, and a lot of work left to do, but that moment is great fun.

Electric cars are fun to drive and they are no longer limited to being slow boring ugly golf carts. Modern electric cars are fast, capable of handling daily driving needs. Each person has their own reason to buy an electric car such as no longer burning gasoline, no longer being directly responsible for pollution or greenhouse gasses, or even the white sticker in California that gives access to the carpool lane.

Jenn wrote on April 23, 2012 - 7:11pm Permalink
David, Isn't there an electric Rav4 SUV coming out soon from a Tesla & Toyota partnership? Jenn
Aaron Turpen wrote on April 24, 2012 - 12:30am Permalink
They did a small string of them and as far as I heard, they all went to Canada for testing.
David Herron wrote on April 27, 2012 - 4:10pm Permalink
Jenn, yes Toyota is still planning to start selling it in July 2012. Production is being done at Toyota's plant in Canada where they build the regular RAV4's. I saw one a month ago, it had a bunch of stuff under the hood with Tesla logo's all over it, and the charging connector was Tesla's propriety thing.
Anonymous wrote on April 26, 2012 - 3:16pm Permalink
hey David have you put that karma Gia on the EV photo album? then i could see more info on The plasma Boy is building a 340 mile range all battery Insight Ev he'll run this spring maybe ya auta get info on he's 10 years ahead of the rest of us
David Herron wrote on April 27, 2012 - 4:11pm Permalink
Unfortunately I haven't put it there. You can find some info I posted on visforvoltage.org Interesting about John's plan for a long range Insight EV. I'll look for that.