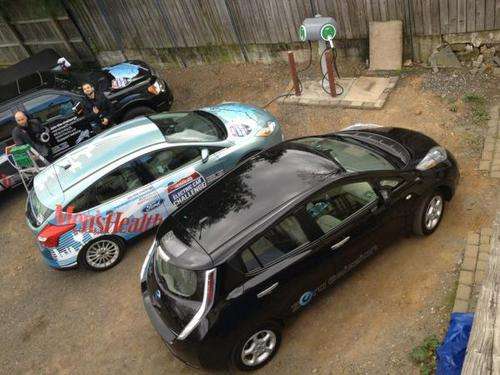 Setting out yesterday from the NY Auto Show, a team organized by Men's Health Magazine is driving across country in a Ford Focus Electric and expects to get to the Santa Monica Pier in LA within 10-12 days, setting a new record for the fastest cross country trip with an electric car.
Advertisement

Yesterday a team organized by Men's Health magazine set off on a cross-country trip meant to help create a healthier, more satisfying road trip experience, raise money for an important car, oh, and show-case an electric car taking a long distance trip. Electric car owners are supposedly quivering in fear of the dreaded range anxiety, but the Mens Health team is driving a Ford Focus Electric from New York City to the Santa Monica Pier (in Los Angeles) which makes us ask how the team will accommodate the range limits and recharge speed of that car. The team includes race car drivers, Navy Seal commanders, models, and a couple editors of Men's Health magazine. Among the teams goals is to set the record for the fastest coast-to-coast drive in an electric car, but the team does not expect to be breaking any speed limits in the process.

The Men's Health 2012 Electric Car Challenge set off from the NY Auto Show on April 11. The vehicles involved include a 2012 Ford Focus Electric, and a 2012 Ford F-150 with EcoBoost as a backup vehicle. The team expects to stop 40-60 times during the cross-country trip to recharge the Focus Electric battery pack. Each stop, because of the 6.6 kilowatt on-board charger, will require only 2-4 hours.

The faster charge rate on the Ford Focus Electric than, say, the Nissan Leaf's 3.3 kilowatt charge rate, replenishing the battery pack more quickly, making long distance travel like this more efficient. This much is true, except it ignores the availibity of CHADEMO fast charging in electric cars manufactured by both Nissan and Mitsubishi, which can recharge an electric car to 80% capacity within 30 minutes. These sort of claims ("our charger is faster than theirs") is meant to mollify range anxiety concerns with the idea of being able to pop into a charging station for a quick recharge. The Ford Focus Electric 6.6 kilowatt advantage will evaporate next year when the Nissan Leaf also has a 6.6 kilowatt charger.

The schedule for the Electric Car Challenge is meant to allow the team to arrive at the Santa Monica Pier on or before Earth Day, on April 22. The team left NYC on April 11, and expect the whole trip to require 10-12 days. Making the trip in that time will establish the record for cross country electric car drives, creating a new target for new challengers to beat.

Regardless of the 6.6 kilowatt charge rate of the Ford Focus Electric, the team will face an interesting challenge going coast-coast with an electric car. It is not an impossible challenge, others have done this before, just that the challenge has some complications. The electric car recharging network is, at this time, primarily clustered around cities. While there are plenty of recharging opportunities at public and commercial electric car charging stations in most cities, what about the space between the cities? Especially out west where there are long distances between even the small towns?

The first strategy is that the team will stay on side roads, rather than on main highways. This will reduce energy consumption, making the charge in the battery pack take the car further. It also gives the team more opportunities for the second part of the strategy, which is to crowd-source recharging opportunities from people who have 240 volt 40 amp electrical outlets. These outlets are commonly used for dryers, and are also commonly available at campgrounds. A quick browse using the PlugShare iPhone app indicates there are plenty of people listing power outlets in that application, even in the countryside between large cities, but that there are still plenty of long gaps with no declared charging stations. As of this writing the team is in Pittsburgh, making a few stops around the Carnegie Mellon campus, and apparently has stopped at more than one campground to recharge.

How is Men's Health planning to demonstrate a healthier and more satisfying road trip? This sort of trip involves a stop every 1-2 hours to recharge the car, and the team hopes to fill the time of those charging periods with "exciting, life-changing experiences that you can’t enjoy when racing down the highway". The adventures will include exercise and fitness challenges, culinary pursuits, environmental missions and more.

“With gas prices expected to reach nearly $5 per gallon this summer, the Great American Road Trip is poised for a Great American Renaissance,” said David Zinczenko, editor-in-chief of Men’s Health. “We created the Electric Car Challenge to demonstrate a more eco-friendly approach to the road trip that will have a positive effect on you, your wallet, and the environment.”

The team is providing updates at menshealth.com/ElectrifyUS which includes a map created from FourSquare checkins. Follow @MHTechLust or the #ElectrifyUS hash tag on twitter.

LG's New EV Battery Plant Is a Welcome News for Tesla
Tesla Giga Berlin's New Hurdle: It's Not Only the Gov't, but Now Tesla Itself
END_OF_DOCUMENT_TOKEN_TO_BE_REPLACED