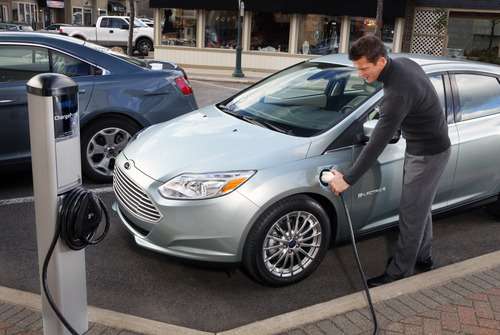 A look at the electric cars coming in 2012

The Nissan Leaf and Chevy Volt were just the beginning, we take a look at the electric cars coming in 2012.
Advertisement

It's the new year, giving us a time to pause, reflect on the past and look to the future. Where 2011 was the beginning of the beginning of serious electrification of the vehicle fleet, 2012 promises to be a breakout year with many new electrified cars (and motorcycles) coming onto the market. While we've had a growing number of hybrid cars beginning with the Toyota Prius and Honda Insight (both launched in 1999), the state of electric cars took a big leap forward in 2011 with the introduction of the Nissan Leaf and Chevy Volt. Both have proved to be relatively popular (for newly introduced technology) with both having more sales in their first year than the Toyota Prius sold in its first year in North America.

Updates to Nissan LEAF and Chevy Volt: Both the Nissan Leaf and the Chevy Volt will continue to be sold in 2012. Both companies plan to ramp up production volume quite a bit. GM has said their sales goal for 2012 is 60,000 Volts, and Nissan plans to open the Smyrna TN production plant that promises to unleash a floodgate of Leaf's upon the world. What remains to be seen is the impact on Volt sales of the hyped up controversy concerning its battery pack, as well as the GM/NHTSA response to the results of the fire investigation. (see Chevy Volt owners to GM: We're Keeping our Cars & Keys) Both cars have improvements and price changes for the 2012 model year, and both remain high quality cars of the sort you'd expect from leading automakers.

Mitsubishi i (a.k.a. i-MiEV): The i-MiEV is a very cute small four-seater electric car from Mitsubishi that's already been on sale in Japan for several years. It's a no-frills car with a very modest price (base price of $29k and after rebates the price is under $22k). It drives and accelerates great, and it's regenerative braking system is adjustable for your preferred behavior. The small price does mean it comes with a smallish 16 kilowatt-hour battery pack and its rated range is 62 miles. However it has an optional fast charge port, using the same CHADEMO standard in the Leaf, meaning that as quick charge stations are installed the i-MiEV will be able to use them. The EPA gives it a combined 112 MPGe rating (miles/gallon equivalent), 126 MPGe in the city and 99 MPGe on the highway, all based on a consumption of 30 kilowatt-hours per 100 miles. While some i-MiEV's have already been delivered to U.S. customers, Mitsubishi says the car is "arriving early 2012". (see Mitsubishi Makes First Fleet Delivery of the 2012 Mitsubishi i-MiEV)

Ford Focus Electric: The Ford Focus Electric is a Ford Focus that is, well, electric. Ford's strategy is to electrify existing car designs rather than design their electric cars from the ground up. This means that if you already like the Ford Focus, you'll probably like the Ford Focus Electric because they're essentially the same car functionally speaking. It's a five seater car based on an already popular platform (the Focus). The regenerative braking system is highly efficient, and Ford recently announced the efficiency will be over 100 MPGe. The 23 kilowatt-hour battery pack should give a 100 mile or so range, but Fords hasn't disclosed the range official estimate. The car has a 6.6 kilowatt charger giving twice the charging speed of most other electric cars (whose chargers are only 3.3 kilowatts). The higher charge rate will give you a longer effective daily driving distance, if you're able to snag opportunity charges throughout the day. There is no support for fast charging. (see Ford showcasing 100 MPGe Ford Focus Electric and other clean vehicle technology)

The car has already gone into production but Ford says only a limited number will be built in 2012. Base price is $39,995 and it qualifies for the $7,500 federal tax rebate.

Tesla Model S: Tesla's business plan all along was to plow vehicle sales income into development of further models with more affordable prices. The company is currently in their first model transition, having ended production of the Tesla Roadster and starting up production of the Tesla Model S. The S is an all-electric sedan that's completely custom designed from the ground up because Tesla doesn't have investments in existing gas car models to fall back on. It's a very fast car (hey, we're talking Tesla Motors), very sleek design, a 17 inch touch panel display on the dashboard and many other advanced features. Tesla makes no-compromise electric cars so we shouldn't be surprised to learn the maximum range is 300 miles; if buying the 85 kilowatt-hour battery pack model whose base price is $77,400. The charging system is also beyond anything offered by the other automakers, with a 10 kilowatt base charging rate that can be doubled to a 20 kilowatt rate, and the company has developed a proprietary fast charging system that can give a complete 300 mile range recharge in an hour. (see Tesla Model S pricing announced, no price increase this time!)

Toyota RAV4 EV: Designed in collaboration with Tesla Motors, the RAV4 EV is an electric version of the RAV4. Toyota has not announced specifications or other details. In July 2011 they reaffirmed the RAV4 EV would be available in mid-2012. Over 10 years ago Toyota hand-produced 1,484 units of the original RAV4-EV built to satisfy California's zero emission vehicle program, and 750 of those cars are still on the road today.

Scion iQ EV: This is an electric version of the ultra-compact Scion iQ city car. With a 65 mile range this micro-car should be able to flit around crowded urban centers very well. The car is expected to be available in 2012, but will only be sold to fleets and car sharing programs. (see Toyota previews electric Scion iQ with its 3rd generation FT-EV concept)

Coda Sedan: This is an all electric sedan assembled in California by Coda Automotive. It can carry up to 5 passengers, and its 36 kilowatt-hour battery pack gives it a 160 mile range. It has a 6.6 kilowatt charger giving a faster recharge time. Coda has begun assembling cars and delivery should commence, in California only, in 2012. Base price is $39,900 and it's eligible for the $7,500 federal tax rebate.

Smart ForTwo Electric Drive: The Smart is, like the Scion iQ, a micro-car meant primarily for urban use. The two seater ForTwo Electric Drive model has been in limited trials in the U.S. and Europe, and is expected to be launched in the middle of 2012. The near-production model shown in Frankfurt last fall had an 87 mile range. U.S. pricing is not known at this time.

Honda Fit EV: This electric version of the Honda Fit is expected to have a 76 mile range, from a 20 kilowatt-hour battery pack. Charging time is brisk due to a 6.6 kilowatt charger. It will be available only on lease, beginning in select California and Oregon markets in 2012 and expanding to the East Coast in 2013.

Wheego Whip LiFe: This small car shares the same small-micro-car niche as the Smart ForTwo and Scion iQ EV. It's a two-passenger front-wheel drive car, and with a 65 miles/hr top speed you can take it on the highway, theoretically. The Wheego Whip LiFe is a "full speed" version version of the Whip LSV Wheego has been selling for a few years. It is available in the U.S. and is being exported to a couple countries. Base price is $32,995 and it's eligible for the $7,500 federal tax credit.

LG's New EV Battery Plant Is a Welcome News for Tesla
Tesla Giga Berlin's New Hurdle: It's Not Only the Gov't, but Now Tesla Itself
END_OF_DOCUMENT_TOKEN_TO_BE_REPLACED