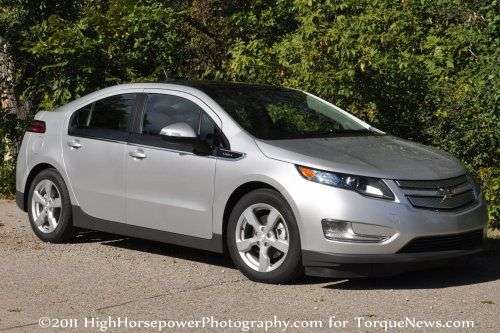 In the wake of the, uh, firestorm over Chevy Volt battery fire safety, a group of Volt owners have published an open letter to GM saying they feel safe, and that GM will get their cars back over their dead bodies.
Advertisement

There's a little, if you will, firestorm concerning a battery fire issue in the Chevy Volt. Last summer the battery pack in a Chevy Volt, three weeks after a NHTSA crash testing, caught fire while it was on a storage lot. This has led to a rising level of concern and now NHTSA has opened an investigation into the safety of the Volt's battery pack, and GM has offered to buy back Volts from, or give loaner cars to, any concerned Volt owners. In the wake of this a group of passionate Volt owners have banded together on Facebook to write an open letter to GM saying they won't give their cars back and the controversy is blowing out of proportion.

Let's take a little detour first to the morning commute in which there's a car on fire, "fully engulfed" in flames. Over 200,000 car fires occur per year, with a couple hundred people dying in the process, because gasoline is highly explosive. Somehow we collectively are able to survive with this danger.

The story begins last May with NHTSA crash testing. A Volt had undergone side impact testing followed by a simulated rollover, and was placed in the NHTSA storage lot, where its battery pack caught fire three weeks later. Three weeks. GM and NHTSA engineers worked on determining the cause and in November re-tested the battery packs and were able to replicate the fires. At that point NHTSA opened a formal investigation.

GM immediately offered to give loaner cars to, or that they might be willing to buy back Volts from, any concerned Volt owners. GM said, however, they would talk with concerned owners to determine just what their concerns are and the appropriate response. Additionally GM is working with NHTSA and other car-makers on improved safety protocols, including a protocol for draining energy out of the battery pack. Their assertion is that just as we drain fuel from heavily damaged cars for safety, so too should we drain "energy" (electricity) from battery packs in heavily damaged electric cars. It's an apt observation because extreme accidents can damage even components deep inside the car such as the Volt's battery pack that's located in the central tunnel.

Over the weekend a group of Volt owners organized an open letter to GM saying essentially "over my dead body". They don't see a danger, and instead are concerned the media firestorm could be creating a false picture of danger that doesn't exist. The letter takes a stand saying these owners believe GM is doing the right things, and that they love their Volts and feel safe driving them.

An over-the-top but typical reaction might be Edward Ellyatt's who said "This is the finest car ever produced and I would not trade it even for any other car made" and "In order to get my Volt back, they would have to shoot me and pry it out of my cold dead fingers". Others, such as Moe Colontonio, more rationally said "I love my Volt! I can't imagine being without it!", and Mike McCarver who said his Volt "is a safe as any loaner car that could be offered, and more enjoyable that any loaner I could think of", and Craig Fisher who said "The last thing that I am worried about is my Volt catching fire. I am more worried about the can of gasoline in my shed for the lawn mower catching fire."

Not all Volt owners are in agreement with these sentiments. Yesterday a report in the Detroit Free Press quoted GM a spokesperson saying that "a few dozen" Volt owners have requested GM repurchase (buy back) their Volts, and several dozen more have taken GM up on offers of a loaner car. The report said that GM had already agreed to buy back a dozen Volts. Back in the Volt owners group on Facebook, Matt Stehouwer said "I have made a offer to GM to purchase a returned Volt for my wife."

To the Media and Drivers Across America:

In light of the recent news stories regarding the Chevy Volt, we, as Volt owners, would like to set the record straight.

We are keeping the keys to our Volts. We love our Volts and we feel safe driving our Volts.

We have done our homework and we know that there is no other car that offers all the advantages of a Volt. We take pleasure in the smooth driving experience. We get a thrill from the performance and acceleration. We feel at ease in its comfortable elegance. Perhaps most of all, we love the convenience and affordability of driving on electricity everyday, while also having the option of a back-up gas generator for long distances. This is the beauty of extended range electric drive. It's fun, it's practical, and it's the future that's available today.

In regards to recent events, Volt owners are glad that the NHTSA, GM, and other manufacturers have now implemented protocols for electric cars in a variety of circumstances. Just as it is necessary to empty a gas tank after a major impact, it is necessary to discharge a battery pack after a major impact. This is a simple and straightforward process. Volt owners feel assured knowing that government and industry are working together to define and communicate this process for electric vehicles, just as they have done for gasoline-powered cars in years past.

Lastly, we encourage every driver in this country to test drive a plug-in electric car and consider purchasing one for his or her next vehicle. There is only one way to really know the electric car experience – and that is to drive one.