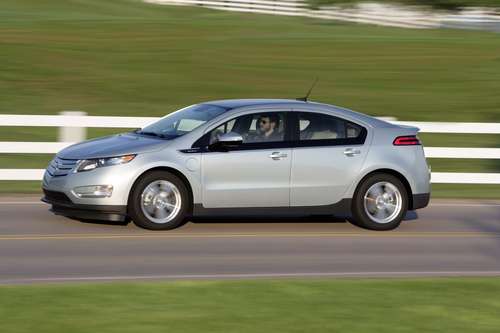 Confidence abounds that they can fix the problems, and getting back to production and sales.
Advertisement

With the controversy brewing about battery pack safety in the Volt, the folks who are stirring the controversy might believe that GM would stop producing the Volt. Instead in a recent interview GM's CEO Dan Akerson says the automaker plans to do the exact opposite, that they'll considerably ramp up Volt production after first addressing the issue behind the battery fire.

It would be sad if this were a case of folly, where the Volt was actually dangerous and GM was bravely soldiering on anyway but selling us dangerous cars. Instead the situation GM faces is one in which the facts say the car is safe, with a flaw the engineers are working to address, and a customer base who is rallying around the Volt.

In an interview published on Sunday in the Detroit Free Press, Akerson called the Volt "safe," pointing out the fires observed so far have occurred only in testing, many days after simulated crashes. He went on to say it's in the best interest of all that "it's better to get it right now," that is fix the issue now, rather than "when you have 6,000 -- instead of 60,000 or 600,000 -- cars on the road." The cost will be lower now to fix the issue (e.g. via a recall) with relatively small number of Volt's on the road (6000 or so have been sold) rather than fixing it in a year or two when there are tens or hundreds of thousands of Volt's on the road.

Talking about the three fires observed so far Akerson said "We're not the only car company that has liquid-cooled batteries out there." Those fires, which were observed only in NHTSA simulated crashes, are thought to have occurred because of coolant leakage in damaged battery packs. Some EV automakers (notably Coda, Ford and GM) have active cooling systems that are meant to keep batteries within reasonable operating temperatures, because batteries can get hot during charging and during use. Nissan relies on passive cooling, that is air flow, rather than active cooling with a liquid coolant. Ford's representatives say "We still have limited information about the cause of the Volt fires in the government crash tests, so it is difficult to comment on how they relate to Ford’s electrification program," and that they will continue "to work with the NHTSA as we prepare to launch our electrified vehicles over the next year.”

If GM is able to increase Volt production to 60,000 in 2012 it will be a faster ramp-up rate than the Toyota Prius, which did not really take off until the Gen II Prius was launched. Would the adoption of EV's be faster, or slower, than the adoption of hybrid cars a decade ago?

Whether GM is foolish, or wise, to increase Volt production depends on how the concern over the fires plays out.

GM's automotive engineers are some of the best in the world, and the NHTSA is one of the best safety agencies in the world. The automakers and the NHTSA routinely handle safety defects in automobiles and trucks, conducting recalls when necessary. We have over 200,000 car fires a year with very little controversy. It seems reasonable on GM's part to expect that this issue will be resolved shortly, they'll run through some process like a recall to fix whatever cause is identified, and that it's a reasonable move to proceed with ramping up Volt production.

Anonymous wrote on December 21, 2011 - 1:20am Permalink
The prices of electric cars will need to come down for folks to buy them in the current economic environment. I'm looking at a chart of year over year US oil production from a approximate high of 9 million barrels of oil in 1980 to about 5 million barrels of oil today. Another chart would show the rising price of gas year over year during the same period. Appears we are extracting a lot of oil now from the Canadian oil sands and deep deep under the ocean as most of the easy accessible oil is gone. Producing oil from such places as Canadian oil sands must produce vast amounts of green house gases as it would appear to be terribly inefficient. The US with it's addiction to cheap oil and gas will need to switch to alternatives at some point in order to survive. It seems the sooner the US can switch from using diesel in big trucks to LNG and cars can be electrified it would save some of this oil for things that are needed such as producing plastics etc... I think any sane person would have their pants scared off of them if they could figure the implications of no energy plan in the US except drill baby drill? If interested in the facts just search for year over year oil production.
Anonymous wrote on December 23, 2011 - 10:25pm Permalink
Remember these comments from a year ago? "The chief executive officer of General Motors used a public appearance Friday to slam the Toyota Prius hybrid, calling the car a "geek-mobile" that he would never want to drive." A year later the Volt sales are an embarrassment compared to the number of Prius' sold. Instant karma buddy! haha.
Anonymous wrote on February 17, 2012 - 5:29pm Permalink
Yeah, great mileage, but is there a less enjoyable car sold in the U.S. to drive than a Prius? Also, Captain Ignorant, perhaps you might want to do a little research before shooting off your big mouth and showing your stupidity; the Volt, sold in limited dealerships and with very limited supply last year... That's right, sold more Volts than Toyota did in the first year of the Prius... What a shocker, dumbass, a car that's now famous and has been sold since 1997 sells more than a new, expensive car with untested technology... From the ultimate Volt-hater, Faux News: Fox News noted that the Volt’s sales performance for its first year easily trump the sales performance of the Toyota Prius on its first year, which only managed to sell 5,600 units all the way back in the year 2000. Today, the Prius is the best-selling hybrid in America and Toyota has sold 136,463 units of Prius models in 2011. Got dumb?

Tesla-Funded Research Reveals One of The Biggest Mysteries of EV Battery
Tesla Tesla Buyer Nets a Whopping $12,000 Discount After Asking for Reduction
END_OF_DOCUMENT_TOKEN_TO_BE_REPLACED