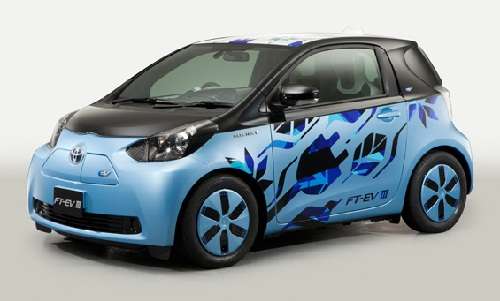 The FT-EV, and its nearly identical gasoline powered brother the iQ, are very small four-seaters that immediately remind you of the Smart ForTwo. The car has a relatively short 65 mile range, which Toyota positions as being perfect for urban dwellers. It's expected to reach the market in 2012 badged as an Scion iQ EV.

Toyota expects the car will get a 65 mile range, with no word yet on speed or acceleration. This relatively short range is in line with Toyota's positioning of the FT-EV as a car for urban dwellers. Micro cars of this sort are well suited to tight crowded urban spaces. You can fit into tight spaces or find parking in areas where the SUV owners will have to keep circling around grumbling about how hard it is to find parking.

The charging port is up front, on the nose of the car, underneath a flap. The flap covers the normal J1772 port, and the pictures released by Toyota show what may be a second charging port such as on the Leaf. The Japanese quick charge standard, Chademo, uses a different connector than the J1772 necessitating the dual ports, such as on the Leaf or the iMiev. It would be surprising for this car to include quick charging if only because its small size places a premium on space, which may not leave room for a second charger on-board. Toyota hasn't released figures like expected charging times or the charge rate it supports, but we expect a full charge to take approximately 3 hours. The battery pack is lithium-ion and is mounted beneath the floor, with no word yet on the capacity. Toyota's policy is to use NiMH packs for their non-plug-in vehicles, and lithium on their plug-in vehicles.

The relatively short range may seem limiting, but those who never leave their city may find it quite usable. In areas with plenty of charging stations even the 65 mile range won't be much of a limit, because opportunity charging throughout the day can easily extend you well beyond that.

The center console includes a pop-up information display which includes navigation systems, and expected driving range based on current pack capacity. We can expect a full entertainment system given that this is targeted at the hip connected youth culture. The dashboard includes a bar graph showing expected remaining range.

Toyota released an accompanying video showing three scenarios of youth flitting about town. Shopping, going out for pizza, and playing music in the park. We can see a smart phone app being used to query charging status while away from the car.

The FT-EV (Future Toyota - Electric Vehicle) was originally shown to the world at the 2009 North American International Auto Show (Detroit), and the FT-EV III is the third generation of this concept. At that time their stated goal was to productize the FT-EV concept by 2012. Because the new version is nearly production-ready, their expectation of bringing it to market in 2012 means they are right on schedule.

This car is clearly targeted at a specific customer niche, and it seems well-suited to that niche.