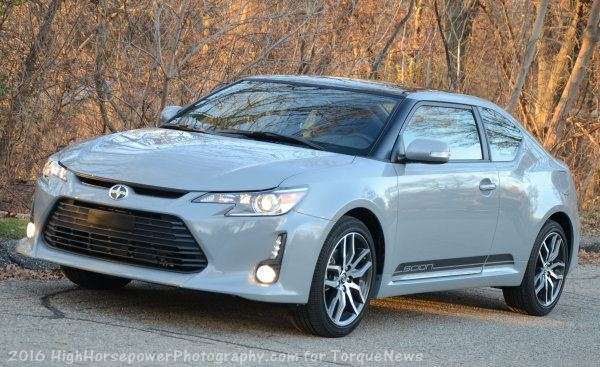 While testing the 2016 Scion tC recently, a friend asked me why the company still sells the tC when they also have the FRS in the lineup, so today, I look at why Scion offers two sporty coupes in the same lineup – and why it is a great idea.
Advertisement

The Scion tC was the brand’s first sporty 2-door coupe and when the FRS was introduced a few years back, some people assumed that the tC would go the way of the Dodo. Instead, the company has continued to offer the tC alongside the FRS, making Scion one of the few brands in America to offer both a front wheel drive and a rear wheel drive compact 2-door coupe…but why?

The simple answer is that the Scion tC is a front wheel drive and the Scion FRS is rear wheel drive, but these two cars different in pretty much every way outside of the fact that they are both small 2-door coupes with four seating positions. Of course, the two differ greatly in terms of exterior design, so personal taste can play a big role in which sporty Scion someone choses – but there are plenty of other differences between these two Japanese coupes.

Drivetrain Differences
The key drivetrain difference between the 2016 Scion tC and the FRS is that the tC powers the front wheels while the FRS powers the rear wheels. They are both powered exclusively by a 4-cylinder engine, but the tC uses a traditional 2.5L mill developed by Toyota while the FRS uses a 2.0L Boxer engine developed by Subaru. These engines have varying power outputs, but the Boxer engine also has a very unique sound and a very unique power band. Both cars are a great deal of fun to drive, but the tC – with its horsepower disadvantage, torque advantage and the front wheel drive design feels a touch quicker from a stop. Front drive configurations inherently offer more wheel horsepower since the power isn’t traveling through as many components as a rear drive vehicle while also offering a touch quicker response – again due to the short distance that the power travels. When you drop the clutch for a hard, sporty launch in the tC, the tires spin a bit and the engine revs quickly, creating a very engaging driving experience. On the other hand, the FRS doesn’t get away from a stop quite as well, and although the FRS will outrun the tC on a long run, the rear drive Scion isn’t quite “pop” until you get up into the higher RPMs.

In short, the tC feels a little quicker when accelerating from a stop, as the 2.5L 4-cylinder engine offers more low-end torque than the FRS. The FRS is the quicker car overall, but the tC definitely offers more pop when leaving the starting line. The FRS might be faster, but the tC is far peppier per the “seat of the pants dyno”.

Handling and Ride Quality Differences
The Scion FRS is a truly remarkable sports car in terms of road handling and in my tests, the FRS will hammer turns as well as almost any performance car sold in the US. It really is a blast to drive on a curvy road so what it lacks in low end acceleration, it more than compensates for those shortcomings in the turns. The compromise to that awesome handling is ride quality and while I love how the FRS feels on the road, it is surely too stiff and too rough for some drivers. That is where the Scion tC comes into play. The tC is a good handling car and it will gladly dive into sharp, low speed turns and wide, high speed turns with confidence. It is fun to drive on the twisties, but it doesn’t stick to the ground like the FRS. The tC sits a little higher and as virtue of such, it has more roll and less grip in the turns. The advantage of the Scion tC suspension and chassis tuning is that it isn’t quite as stiff or aggressive as the FRS, so it is offers a quieter, smoother ride during every day driving situations. The tC is no slouch when it comes to spirited driving, but it puts more emphasis on ride quality than does the FRS so for someone who wants a smoother ride – the tC is the winner.

Passenger Comfort
The Scion tC and the Scion FRS are both 4 passenger vehicles with spacious front seats and very tight rear seats. The tC rear seat has a touch more leg room with the front seats adjusted to accommodate two adults, but putting adults in the back seat of either car will be a challenge. The tC’s rear seating space advantage makes it a little better for seating kids, but the shape of the tC makes a big difference over the FRS. The FRS is situated so low to the ground and the door opening relative to the seats is situated in a way that makes climbing in and out of the back seat a bit of a wrestling match. On the other hand, the more upright nature of the tC means that the door opening is more convenient for loading people into the rear seat and unlike the FRS, you aren’t climbing down into a low-riding car. Really, it is hard to call the FRS a 4-passenger vehicle, while the tC is obviously better-geared towards using all four seating positions – even if the rear seats are only used for small kids. That matter is amplified when you bring into account a very young child, as you will be practically kneeling to get your kid buckled into the back seat of the FRS, but the tC makes that job a whole lot easier.

The back seats of these small coupes are – not surprisingly – very small, but even the spacious front seats of the FRS and tC have their unique advantages. The FRS has beautiful race-style bucket seats that keep you firmly in place during stints of harder cornering. The problem with the FRS is that it is so low to the ground that it can be hard for someone older – or something with bad knees – to climb into the car. The FRS is a car that you kind of sit down into, and once in there, the seats might be a bit too sporty for some. I love the FRS seats, but I can see how they might be uncomfortable for a larger adult. On the other hand, the tC’s upright posture makes getting in and out of the front seats much easier. These front seats have a sporty form, but they are much less aggressive than the buckets in the FRS, so folks who don’t like to be cradled by their seats will prefer the tC.

Price
Of course, we have to mention the fact that the Scion tC starts at $20,180 while the Scion FRS starts at $26,100. For those unfamiliar with the Scion lineup, those prices include pretty much everything that you can get in both cars, so those prices aren’t “prices as tested” – those are real world prices. In the tC, that price gets you the dual pane sunroof, a touch screen infotainment system, power mirrors, power locks, a leather trimmed steering wheel with audio controls, push button start and all of the expected items like cruise control, air condition, etc. In the FRS, that price includes a leather wrapped steering wheel, a sharper sport gauge setup, leather trimmed sport bucket seats and a touchscreen infotainment system. The FRS doesn’t have the sunroof option like the tC, but it does have the lovely sport seats that you don’t get with the tC. The Scion tC and the Scion FRS are very similar in terms of interior amenities, so the customer who is focused on a budget more than being a road course warrior, the tC is the easy choice and if that buyer wants a sunroof – the tC is the only choice.

The Final Word
So who buys the Scion tC instead of the Scion FRS?

If you want a sporty 2-door coupe with easy access, a more functional rear seat, a more comfortable ride, more spunk from a stop and a lower purchase price – the tC is the sporty Scion for you. The tC is fun to drive, but it maintains a greater level of comfort for the passengers while offering its own advantages in terms of driving dynamics. Also, if you demand a sunroof or prefer front wheel drive, the tC is the only choice in the brand.

If you want a car that will handle like few others, the Scion FRS is one of the best options on the market, but the Scion tC is more useful, more comfortable and far less expensive than the rear drive Scion. The people who buy the Scion FRS want a car that sticks to the road like it is on a rail and they aren’t as concerned with comfort, but those prospective Scion buyers who want a sporty coupe that puts more focus on comfort and functionality are the ones who opt for the tC.