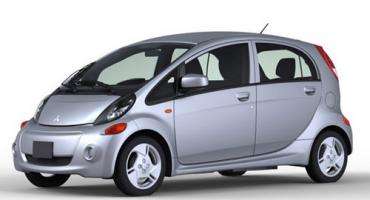 In a move bound to expand its exposure, Mitsubishi has made it first fleet delivery of the 2012 Mitsubishi i-MiEV to a non-profit group in the San Francisco Bay area that promotes innovative mobility options.
Advertisement

The 2012 Mitsubishi i-MiEV is Mitsubishi’s all-electric vehicle and the most fuel efficient car on the road thanks to its EPA-rated 112 combined/126 city/99 highway MPGe (miles per gallon equivalent). According to Mitsubishi, its electric vehicle has a range of 62 miles.

Not only is the Mitsubishi i the most fuel efficient ride in the U.S., it is the most affordably-priced mass-produced electric vehicle available in the United States. It has an MSRP of $29,125 – about $3700 less than the Nissan Leaf - for the base ES model before a federal tax credit of $7,500 and available state financial incentives.

Getting the 2012 Mitsubishi i into fleets will help it gain greater exposure, which ultimately instills consumer confidence in the product if it is seen operating smoothly. On the flip side, introducing it into fleets also helps Mitsubishi work out any kinks before the vehicle gets wide exposure in the consumer marketplace.

Representatives from Mitsubishi Motors North America, Inc., (MMNA), along with San Rafael Mitsubishi, conducted the first fleet delivery of the all-new 100% electric-powered 2012 Mitsubishi i to the California Bay Area's City CarShare in a special ceremony held at the Green Vehicle Showcase located in front of San Francisco City Hall Plaza on Thursday, December 8 at 9:00 a.m.

City CarShare is a Bay Area nonprofit organization founded in 2001 with the help of several other local nonprofits and the cities of San Francisco, Berkeley and Oakland. Its mission is to promote innovative mobility options to improve the environment and the quality of life in the Bay Area. By providing short-term access to cars City CarShare is reducing traffic congestion, parking problems and dependence on oil while promoting cleaner air and quieter streets.

"We are very pleased to introduce the all electric Mitsubishi i into our fleet. This vehicle brings us one step closer toward our goal of having 50% of our fleet run on alternative fuel as part of our mission to decrease carbon emissions in the Bay Area," said Rick Hutchinson, CEO, City CarShare.

Numerous fleet orders have already been placed for the innovative, environmentally-friendly Mitsubishi i by a wide variety of organizations - multinational corporations, municipalities large and small, major utilities and nonprofit organizations - from New York to Hawaii, according to a press release sent to TorqueNews by Mitsubishi.

"We thank the Bay Area's City CarShare for being the first fleet recipient of our innovative 100% electric-powered vehicle," said Yoichi Yokozawa, President and CEO of Mitsubishi Motors North America, Inc. "City CarShare's stated goals are to help promote modes of personal transportation that help improve the environment while reducing noise pollution as well as fossil fuel dependence, so the 2012 Mitsubishi i is the perfect vehicle to help achieve this nonprofit's ambitious mission."

The 2012 Mitsubishi i is the first of several new advanced, alternative-fuel production vehicles that the Japanese auto manufacturer plans on bringing to the North American market in the next few years.