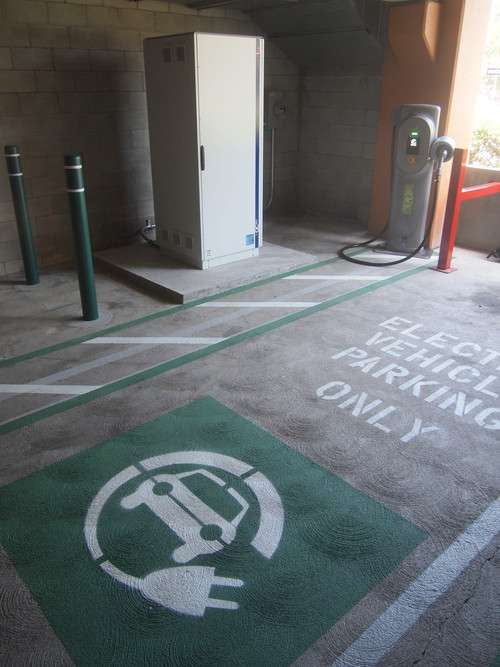 Electric car charging infrastructure provider 350Green announced yesterday a network of 25 electric car fast charging stations, the first has been installed in the Stanford Shopping Center, and the rest to be installed around the Bay Area by Fall 2012.
Advertisement

Yesterday, 350Green announced plans for another electric car high speed charging station network, this time in the San Francisco Bay area. The first of the 25 CHADEMO compatible fast charging stations has been installed in the Stanford Shopping Center, in Palo Alto. This is the first electric car fast charging station installed in a retail setting for public use in California. About half of the stations should be installed by the end of June, with the rest to be installed by Fall 2012. The CHADEMO compatible quick charge stations are usable by Nissan Leaf and Mitsubishi i-MiEV owners whose cars have a CHADEMO fast charge port.

The quick charging station installed yesterday is in the Stanford Shopping Center parking garage 2, located off Quarry Road. The parking garage has green signs on it reading "EV Charging Stations," on one side of the parking garage is the fast charge station, and on the other side are two level two charging stations also owned by 350Green. The station currently says "CharJit" on the display screen, but we were told to expect new branding to be unveiled in a month or two. The level 2 stations are on the ChargePoint network, and members can use those stations with their ChargePoint card. The fast charge stations require a payment card one gets from 350Green (see 350green.com/card). The $21 card includes three 30-minute charging sessions.

"We're excited to be the first in the state to offer our shoppers the fastest charging option available," said John Benvenuto, Mall Manager, Stanford Shopping Center. "This reinforces the commitment to sustainability and convenience that our customers in the Bay Area have come to expect from us as a reflection of their values."

The SF Bay Area network is funded in part by grants from California and regional agencies including the Bay Area Air Quality Management District (BAAQMD), and the California Energy Commission (CEC).

In addition to the projects in Chicago and SF Bay Area, 350Green has another project underway in Pennsylvania.

"Fast chargers make a big impact on an electric car drivers mobility," said Mariana Gerzanych, 350Green's co-founder and CEO. "By installing this first of many fast chargers throughout the Bay Area, we are helping to make it as easy and convenient to charge your EV as going to the cash machine or gas station."