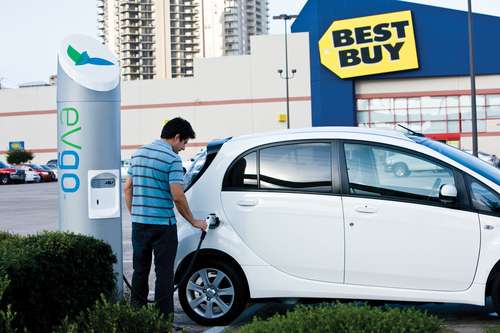 California's Gov. Jerry Brown today announced a settlement with NRG over its role in the California Energy Crisis, in turn NRG gets to own and operate a massive electric car charging network.
Advertisement

California's electric vehicle infrastructure goals received a huge jump start today following a $120 million settlement with NRG. The deal, which is both exciting for the boost to electric vehicle adoption, and maddening for some of the business details, allows NRG's subsidiary eVgo to build 200 high speed charging stations and install the wiring for another 10,000 normal speed charging stations. The settlement in turn closes out a lawsuit between California and NRG dating back to the era of power brownouts.

Over ten years ago California suffered an energy crisis that was later found to be caused by illegal abuse of California's electricity market, by energy trading companies. The crisis made for routine electricity shortages on days of peak demand, leading to electricity brownouts, a set of long term energy contracts to supply needed electricity, and the eventual ouster of Gov. Gray Davis. The total cost for that crisis was immense. A subsidiary of Dynegy, later bought out by NRG, was one of the culpable companies in the crisis, leading to today's settlement.

The $120 million settlement with NRG was coupled with an executive order signed by Gov. Jerry Brown that calls for a series of electric vehicle infrastructure development goals in 2015, 2020, 2025 and 2050. An alphabet soup of state agencies and private organizations are tasked with:

By 2050, "a reduction of greenhouse gas emissions from the transportation sector equaling 80 percent less than 1990 levels." This is an existing goal stemming from an executive order signed by Governor Schwarzenegger.

To goose zero emission vehicle adoption, California's state government is directed, through normal fleet vehicle replacement, to increase the number of zero emission vehicles in the state fleet. The goal is 10 percent of fleet purchases in 2015, and 25 percent by 2020. Vehicles that have "special performance requirements necessary for the protection of the public safety" are exempt from the directive.

Adrienne Alvord, California and Western States director for the Union of Concerned Scientists said “Using the settlement in this creative way is turning a dark chapter in the state's recent past into a fantastic opportunity to build our future. This is an example of the sort of imaginative leadership we welcome to help create a cleaner and more secure future. Governor Brown’s executive order and the settlement are significant and creative commitments to a clean energy future for California. More electric vehicles on the road and more charging stations will help create jobs in California while cleaning our air, tackling global warming, and protecting consumers from pain at the pump."

“This executive order strengthens California’s position as a national leader in zero-emission vehicles,” said Governor Brown, “and the settlement will dramatically expand California's electric vehicle infrastructure, helping to clean our air and reduce our dependence on foreign oil."

Where this starts to be maddening is when we double click on these questions: Who will pay for the electric vehicle charging infrastructure? Who will own that infrastructure? Turns out the answer to both is NRG.

NRG issued a statement today explaining the settlement is broken down into two parts. One part, $20 million, is a lump payment to the California Public Utilities Commission (CPUC). The other part, $100 million, is described as "infrastructure investment over four years" and that NRG would end up owning a "fee-based charging network will consist of at least 200 publicly available fast-charging stations."

It's relevant at this point to mention that NRG's subsidiary, eVgo, builds electric vehicle charging networks. Their current operation is in Dallas and Houston, and the eVgo website today contains a banner reading "eVgo is Headed to California". In a BIG way.

In addition to the 200 fast charging stations, NRG is committing to "the wiring for at least 10,000 individual charging stations located at homes, offices, multifamily communities, schools and hospitals." This fits directly in to the eVgo model of partnering with shopping centers, offices and multi-family housing complexes, to provide electric vehicle charging stations.

“With this agreement, the people of California will gain a charging infrastructure ready to support their current and future fleet of electric vehicles," said David Crane, NRG's Chief Executive Officer. "And we will be helping the State meet its clean car goals as embodied by its Zero Emission Vehicle (ZEV) mandate.”

Normally when a company pays a settlement for wrongdoing, it pays a sum to the litigant in the lawsuit. In this case the settlement is split into two parts, one part is a payment to the State, the other is this investment in what will become eVgo's entry into California's market for electric car charging stations. While NRG could have chosen to make this investment on its own, there is a chicken-and-egg situation regarding deployment of this infrastructure. Prospective charging station network owners, like eVgo, want to see a significant number of electric car owners. Likewise, prospective electric car owners want to see a network of charging stations. Who blinks first, the network owners or the car buyers? What the settlement has done is to give NRG a push towards building the infrastructure that will make electric car ownership look more attractive.

This agreement stands to speed up zero emissions vehicle adoption. It leaves NRG paying what amounts to a slap on the wrist for its liability in California's energy crisis 10 years ago. Additionally there are a number of questions left, such as will this scuttle the existing electric vehicle charging networks (Blink and Chargepoint). In this era when government investment is distrusted, and corporate investment is sacrosanct, it does mean, as NRG's CEO David Crane notes, “This network will be built with private funds on a sustainable business model that will allow NRG to maintain and grow the network as EV adoption grows.”

Jim Burness wrote on March 29, 2012 - 9:33am Permalink
This just seems like a really raw deal for ChargePoint and Blink. A fair settlement would have put the money into a fund that would have allowed all of the participants in the market to build out rather than just the criminal offender.
kalifornia wrote on April 8, 2012 - 3:09am Permalink
Naw. Its a fake settlement. The state really is the one that caused the black outs. NRG bought a company involved with california's crime against its citizen's, and NRG wants to build chargers. At least people get to plug in.
mk wrote on May 12, 2015 - 10:07am Permalink
Oldie but goodie. For fast charge as of May 2015, eVgo rate is 1/4 that of Blink and sometimes 1/15th that of Chargepoint (Chargepoint rate is obsecure to say the least). With 75% to 95% discount, I can't see how Blink and Chargepoint will survive. When there's no more competition, eVgo can charge whatever they want. Either Blink and Chargepoint are bad businesses bilking customers or eVgo is out to destroy the competition. I suspect the latter, but thanks for cheap energy for now.