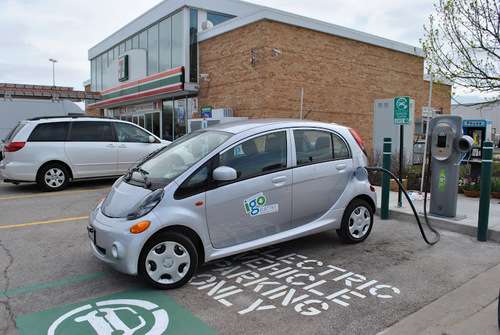 350green is building, in Chicago, what will be the largest electric car fast charging network in the U.S., along the Illinois Tollway, the Chicago airports, and other areas in and around Chicago.
Advertisement

“Investing in green infrastructure and encouraging greater use of green transportation alternatives has been a top priority of my administration,” said Governor Pat Quinn. “With the installation of the largest network of state-of-the-art fast-chargers across the state, Illinois will continue to provide the public with environmentally friendly, affordable travel options and invest in projects that support innovation and job creation.”

The City of Chicago is overseeing the Chicago-Area EV Infrastructure Project, which includes a total of 280 electric car charging stations. The project has a budget of $8.8 million, $1.9 million of which is public funding, and $6.9 million private funding. The focus is to install charging stations in areas with dense residential and worker populations, as well as heavily traveled areas. The State of Illinois has additional funding through the Illinois Jobs Now! plan for both electric vehicle manufacturing and infrastructure incentives.

One aspect of the project is partnerships with charging station hosts such as 7-Eleven and Walgreens stores. It's well understood that electric car owners tend to seek out charging stations, and will reward businesses who install those stations by spending money buying things in those stores. This is similar to the reason why Walmart stores allow RV owners to park in their parking lots, and in exchange the RV owners shop at Walmart stores. “Our support for electric vehicle charging stations is a perfect fit with our commitment to providing travelers with the things that make their trip more enjoyable – whether it’s our coffee, energy drinks or variety of fresh food products we offer at our stores,” said 7-Eleven Market Manager Tim Hale. “Now we offer the most advanced charging technology to people driving the most advanced vehicles.”

Earlier in the month Chicago Department of Aviation (CDA) introduced an ordinance to authorize installation of additional electric car charging stations at both O'Hare International and Midway International airports. These will include both level II and level III charging stations, in the short term parking lots and the cell phone waiting areas. This agreement is also with 350green, and access to the charging stations will be covered by a $70 per month 350green membership agreement, or a $3.50 fee for a 90 minute level II charging session, or a $7 fee for a 15 minute level III charging session. The CDA and 350green have a revenue sharing agreement to funnel some of the revenue to cover electricity and income to the CDA.

California recently announced a fast charging station network that is to include 200 fast chargers to be installed across that state over the next four years. Similarly to California's plan, the Illinois plan is an endorsement of the CHADEMO fast charging standard. CHADEMO is the only fast charging system available now for electric vehicles, and is supported by the Nissan Leaf and Mitsubishi i-MiEV. Other electric car manufacturers have chosen to wait on fast charging, and to instead work through the SAE on a different standard.

LG's New EV Battery Plant Is a Welcome News for Tesla
Tesla Giga Berlin's New Hurdle: It's Not Only the Gov't, but Now Tesla Itself
END_OF_DOCUMENT_TOKEN_TO_BE_REPLACED