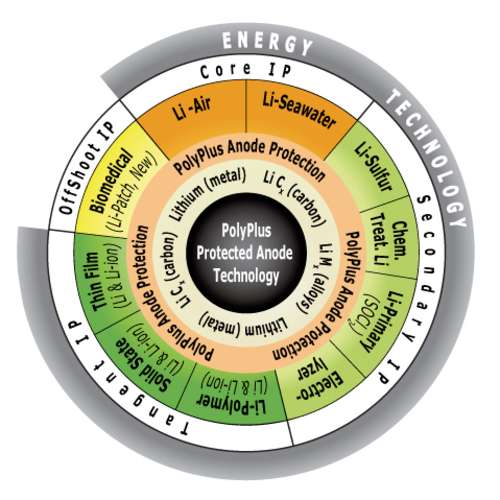 The PolyPlus technology enables lithium-metal-air or lithium-metal-water based batteries with a game-changing jump in energy density over todays lithium-ion batteries, and could bring us to the nirvana of 500 mile range electric cars.
Advertisement

Supposedly the achilles heel of electric cars is the range, and even though electric car owners know range anxiety disappears after a week of ownership, having a longer electric driving range would be handy. Tesla Motors repeatedly proves that a long range electric car is simply a matter of squeezing enough kilowatt-hours of storage onto the car, and then being able to charge a high enough price for the car to pay for the battery pack. Berkeley CA based PolyPlus is developing lithium-air and lithium-water battery technology to make it more practically possible to carry enough kilowatt-hours on-board a car to go 500 miles or more on a charge.

Today PolyPlus announced they'd been selected as a finalist in the Power Generation/Utilization category of the 2012 Edison Best New Product Awards. The awards are named after famed inventor, Thomas Alva Edison. Among Edison's own inventions was a nickel-iron battery that was to be sold in electric cars manufactured by Ford, if it weren't for a mysterious fire that destroyed the Edison factory complex.

Lithium is a highly reactive metal which is known to do catastrophic things when exposed to air or water. Lithium is not found in nature as a pure metal, but always bound to other chemicals. Lithium Ion battery chemistries are a way of binding lithium to other chemicals in a battery for safety (and other) purposes, but this comes at the cost of an energy density much lower than the theoretical maximums. The PolyPlus technology for lithium-air and lithium-water creates the same safety, while maintaining a very high energy density.

To put this into perspective, the Nissan Leaf has a 24 kilowatt-hour battery pack for a nearly 100 mile range. It's battery pack will weigh in the neighborhood of 96-160 kilograms. Using the 1300 watt-hours/kg energy density PolyPlus reports, storing the same energy storage would weigh 19 kilograms, and a 96 kilogram battery pack would carry 125 kilowatt-hours of energy storage, for 5x the energy carried on todays Nissan Leaf, which should offer a nearly 500 mile range.

PolyPlus is currently testing samples of its lithium-water battery and expects the product to be commercially available in 2013.

On the company's website, PolyPlus says that lithium-air batteries have a theoretical energy density of 10,000 watt-hours/kilogram, an energy density that's capable of powering an electric car for a full cross-country trip. Or, more practically, would improve the feasibility of electric big trucks and the like. But achieving anything close to this theoretical density is a ways off in the future. PolyPlus projects the energy density for commercial lithium-air batteries to be 1000 watt-hours per kilogram.

The breakthrough technology is what PolyPlus calls a "protected lithium electrode" (PLE), that remain stable in a broad range of electrolyte solutions. The PLE technology encapsulates lithium metal sealed in a a solid electrolyte. The electrolyte is conductive to lithium ions, but impervious to liquids and gasses, keeping the water or air from touching the lithium.

We should note that fast charging of a 125 kilowatt-hour battery pack will require enormous electrical supplies.

Winners of the Gold, Silver and Bronze Edison Awards will be announced April 26, 2012 at the Capitale ballroom in New York City. The awards program occurs over a period of two days and includes a "Meet the Innovators Forum" and an "Innovator's Showcase".

Rob wrote on February 16, 2012 - 11:44pm Permalink
One of my frustrations as an EV enthusiast are the ever shifting goalposts EV's seem to be aiming for. Battery improvements are a huge factor in increasing marketability of EV's, however we reach a point somewhere around 300 miles where we are talking about increasing battery range to serve fewer than 0.01% of all car trips. Looking at a vehicle like the Tesla Model S with a 2nd trunk (or frunk) in front of the cabin in the space normally taken by an ICEs complicated engine and mechanicals I do see a potential market for leasable auxiliary drop in battery for those rare longer trips. But the added cost of owning a battery only needed once or twice a year seems unjustifiable. I do see significant potential from this technology not to increase range but to massively cut weight and space required for battery packs and the secondary efficiency gain weight savings would bring. Similarly concerns that 500 mile battery packs would require huge power supplies to fast charge seem ludicrous. Fast charging really only has a role to range extend and continue a long car trip following a meal break. Once again the frequency of trips greater than 500 miles let alone the 1000 miles this would allow is so low that considering it seems a waste of time. Of much greater importance bu not commented on is cost projections, we reach a sweet spot in terms of range anxiety at ~300 miles, the bigger acceptance benefit from that point lies in cost reductions rather than further range increases.
Aaron Turpen wrote on February 17, 2012 - 6:11pm Permalink
The reality is that in order to compete in the automotive market, battery electrics are going to have to appeal to more than the nerd elite. Just because "logic" says that they don't need 100 miles or more of range doesn't mean people aren't going to expect that. The current paradigm, which has been in place for more than three generations, is that vehicles require about 10 minutes to fill up, get from 250-300+ miles out of that and then require another 10 minute fill up. No plugging in every night, no special additional equipment over and above the cost of the car, etc. Another issue is longevity. Batteries today are good for roughly 7-10 years or about 100k miles of use (depending on several factors, but averaged this is about right). That's a far cry from the 284k I got out of my Corolla as a teenager without any major or costly repairs and a far cry from the 165k we've currently got on our Civic that is still running strong with, again (knock on wood) no major repairs or replacements required. With batteries being 1/3 or more of the price of the car, this is a BIG roadblock. It's equivalent to swapping out the engine or transmission in an ICE every 100,000 miles. Nobody will put up with that for long. EVs have a lot to overcome socially and in marketabiility before they can really be accepted as mainstream by most Americans. It's why the EV market will almost assuredly be dominated by range-extended and other hybrid electrics rather than battery electrics.
Matthew Newton wrote on February 21, 2012 - 5:28am Permalink
Great post Aaron. The good news is there's two possible solutions. Better Place is a company that has pioneered a battery swapping technology, which means that you can drive off into the sunset just as you would on gas but instead of stopping at a gas station you would stop in at a battery swapping station. Win-win for everybody as you don't have to bear the cost of a battery. Secondly, the DoE is predicting that the cost of batteries is going to drop markedly in the next few years, from $12k+ to around $1500 (no source, sorry). Should they be correct - and the article above is just one of many reporting on the incredible progress being made in the world of lithium batteries - then electric cars will not only be cheaper to run, they will be cheaper to buy. Matthew Newton Driverless Car HQ.
Teoatawki wrote on April 3, 2012 - 7:31am Permalink
Longevity issues are over-hyped. The truth is, that after 7 or 8 years and 100K+ miles the battery pack does not need to be replaced. At this point, the battery capacity (and therefore range) will be reduced by 20-30 percent. The car with the original battery pack is still useful, and if you're not desperate for every bit of possible range, you could drive it another 100K miles in another 7 years, when your battery capacity might be down to 50%. In 14 years a battery of equal or greater capacity to the original battery when new will likely weigh half as much and cost < 25% of the original battery price.
Aaron Turpen wrote on April 5, 2012 - 1:41am Permalink
On a car with a 75 mile range (seems to be the average EPA range for production EVs) a loss of 20-30% is pretty significant.
Anonymous wrote on February 17, 2012 - 11:16am Permalink
I am not sure that we can blame the disappearance of the nickel iron battery on a "mysterious" fire. This sounds like hyperbole to me! There was a fire, and the equipment was moved, but let's let the conspiracy go.

LG's New EV Battery Plant Is a Welcome News for Tesla
Tesla Giga Berlin's New Hurdle: It's Not Only the Gov't, but Now Tesla Itself
END_OF_DOCUMENT_TOKEN_TO_BE_REPLACED