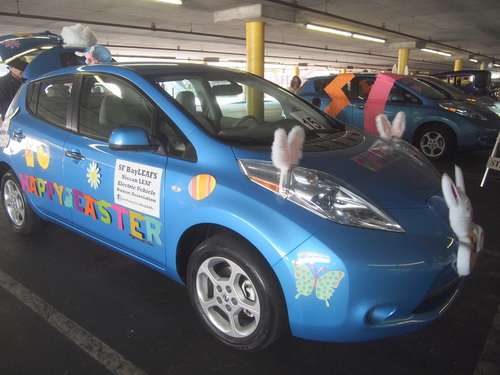 April is a prime month for electric car owners to show off their cars at Earth Day events, but an Easter parade in Campbell CA afforded the SF Bay BayLeaf's group to show 12 Nissan Leaf's, dress their cars as giant bunny rabbits, and do a bit of fun electric car advocacy.
Advertisement

It's Easter time which means communities around the country gather for parades featuring bunny rabbits, candy, and group after group of people showing community pride in one thing or another. This weekend in Campbell CA, one of these groups were members of the San Francisco BayLEAF's group driving a contingent of 12 Nissan LEAF's dressed up in bunny ears and whiskers. The BayLEAF's is a Nissan Leaf owners group based in the SF Bay Area.

The event was the annual Bunnies and Bonnets parade held in downtown Campbell. Campbell is situated in a corner of Silicon Valley, next door to Los Gatos. Campbell itself is a small town, that borders on San Jose, and is a key node in the fabric of cities that comprise Silicon Valley. Coincidentally Campbell happens to host the world headquarters of Coulomb Technologies, operator of the ChargePoint network of electric car charging stations.

Campbell recently installed several electric car charging stations, all part of the ChargePoint network. The stations are scattered around parking lots and parking garages in the Downtown Campbell area. These stations of course saw an uptick of usage yesterday with the BayLEAF's coming to town.

One of the BayLEAF members had for years organized the Porsche club appearance in this same parade. This year, as a new LEAF owner, he decided to organize the BayLEAF's group to appear. Organization was done through the BayLEAF group on Facebook, and the goal was to have anywhere between 5 and 1000 Nissan Leaf's participate in the parade. The 12 Leaf's in the parade was well within the target range, and all had a good time.

The LEAF owners covered a broad spectrum of humanity, equally men and women, young and old, united in a common dream of showing off their electric cars. One young man had tricked out his Leaf with extra lights and other doodads. A retiree coming all the way from Alameda with his LEAF had also built several electric car conversions over the years. He was using the CarSounds app for his iPhone, connected via Bluetooth to the car sound system, to make his LEAF make vrooming noises. Another not only owns a Leaf, but is one of the Electronauts in the BMW ActiveE program.

The appearance was essentially the same as any other car group in a small town parade, much like the muscle cars and Porsche's featured later in the parade. The car owners doing their best to show off pride in their cars, the cars of course dressed up in bunny rabbit decorations. The bulging headlights on the Nissan LEAF actually makes a great base for eyelashes to start create a bunny motif, then with something resembling a nose on the charging flap up front, a fuzzy something or other on the rear window wiper, and attach some kind of ears into the windows or roof, creates the illusion of a giant bunny rabbit. The most appropriate ears were constructed by a LEAF owner from Santa Cruz, using the stiff 3-conductor wire used to wire electrical circuits in a house.

What this appearance means is a stage in the mainstreaming of electric cars in America. For a long time electric vehicles have been a fringe activity, with most of the few electric car owners either having built their own, or driving one of the electric cars left over from earlier era's of electric car adoption. (Disclosure: I drive a beautiful 1971 Karmann Ghia that I converted to electric drive last year) Last years sales of electric cars vastly increased electric car ownership in the U.S. and considerably lowered the barrier-to-entry for electric car ownership. These factoids combine to start a wave of change that could be like dropping a pebble at the top of a snow covered mountain, that eventually causes an avalanche as the dropped pebble unleashes a chain reaction of forces that gather and build momentum.

A month ago we wrote about the Emerging Technology Hype Cycle and specifically the Trough of Disillusionment, describing how this is playing out with electric cars. Primarily those purchasing electric cars over the last year are thought to be the "early adopters." These are the people who buy the new thing because it's cool. For the new thing to become mainstream a second or third wave of purchasers must also decide to buy in, and those people look to the first wave purchasers before jumping on-board. The trough of disillusionment refers to the negative backlash that always strikes against new products. With electric cars that backlash is taking the form of extreme right wingers deriding electric cars with the often outright false things being said.

An event like yesterday's parade is an opportunity for the excited first adopters to reach out to the second or third wave purchasers and essentially say "come on in, the water is fine." Put another way, it's an opportunity for the LEAF owner to show the neighbors they aren't so nutty after all, and that the LEAF is a perfectly fine, functional, car, that is worthy of being in a parade. In this instance, the BayLEAF's apparently were invited to participate in Campbell's 4th of July parade.

Electric car owner groups around the SF Bay Area are planning electric car showings at several Earth Day events over the next couple weeks, and are organizing what's hoped to be a large contingent of electric cars at the Hybrids2Hotrods show in May.