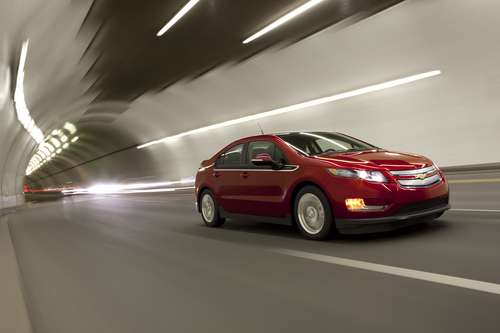 It's superbowl season and one of the now-traditional side-shows to that football game is the advertising run during the show. Because of the large audience there's huge competition and high prices for superbowl advertising spots. Reportedly GM spent $3.5 million for a spot to advertise the Chevy Volt, which led to a piece on Fox News yesterday in which Mark Morano slammed the ad and the Volt with a string of borderline or false accusations.

In the piece Morano talked to the right-winger story-line that every expense GM makes spends taxpayer money (because the government still owns a chunk of the company), making the Volt a waste of taxpayer money, because another right-wing oriented publication decided to call it a flop. Because they do such a good job spinning this line of reasoning, its worth teasing apart what they say. While most of it is false, they sound so convincing that the casual listener who doesn't know better will come away with a falsified impression of the truth.

The advertisement in question is a little strange, showing a Chevy Volt owner discovering a group of aliens from the UFO flying overhead excitedly scrutinizing his Volt, because of the advanced technology. It's the kind of advertisement that makes one scratch their head and wonder what the marketing department was smoking. Which, in turn, is fitting with GM's history of advertising for electric vehicles, because the EV1 commercials were also strange and widely reviled. But is a strange TV ad any reason for flinging a string of inaccurate accusations around?

The piece starts with "GM spent $3.5 million on that ad, or the equivalent of 89 Chevy Volt's," to which Mark Morano explained that the Government bought that ad with "our money". Why the Government? Because the Government still owns 26% of GM. Really? This is clearly false because GM's advertising, like in any company, is controlled by GM's Marketing Department. Marketing Department expenses show up in the corporate financial results as a Marketing expense. Meaning the $3.5 million for that ad will appear in GM's next 10-Q filed with the SEC in March or April. How is that a Government expense?

Next Morano claimed the advertisement was an insult to space aliens. He said "because the 1896 Roberts Electric Car got the exact same range as the Chevy Volt, 40 miles," the space aliens wouldn't be interested in the Volt because it's technology is the same as was used 116 years ago. Unfortunately this meme of the 1896 Roberts Car and the Volt has filled up the search engines making it hard to find accurate information. As a general rule the early electric cars had maximum speeds around 20 miles/hr, and had extremely different technology than modern cars. Instead of a light weight lithium-ion battery pack, it would have been a heavy lead-acid pack. The Roberts Electric Car would not have had a gasoline generator for extending the range, nor air bags, nor OnStar, nor power steering, nor about a zillion other technological advances made in the last 116 years. How could any rational person get this confused?

Where next did Morano turn? Sales figures. He described January's Volt sales as another bad month, and indeed there was a significant drop in Volt sales last month over December's sales. The whole picture makes Obama's stated goal of 1 million electric cars by 2015, as Morano points out, look like an impossible dream. And, of course, their hidden message is that because Obama's dream here seems impossible, it makes him a failure. Still, their point about Obama's 1 million electric cars goal is a valid concern.

So, Morano asks, what is GM's response to having dismal sales of a car that's no better than the 1896 Roberts Electric Car? To spend $3.5M of our money on a superbowl ad. As we've already seen, the money to pay for that ad wasn't government money, it was GM's money. Whether the Chevy Volt sales figures are dismal and worthy of being called a "flop" depends on your point of view. The Volt is a new technology car, and its sales shouldn't be judged against regular gasoline cars. Instead the proper benchmark are other new technology cars like the Toyota Prius. The Prius was not a hit right off the bat, it took four years of "dismal" sales before Prius sales took off. It's not unreasonable that the same could happen for the Volt.

Morano, having constructed the argument that the Chevy Volt is a complete and utter dismal flop of a failure of a car, is asked what should GM do. Should GM just bury the Volt, or should GM treat it as a boutique car that nobody buys but brings them into the show-room so they'll buy an SUV? GM is partly to blame for this line of reasoning because they call the Volt a "halo car" that gives GM a good image, and their marketing department has determined they've had many new buyers come into GM show-rooms because of the Volt. Sometimes buying cars other than the Volt. GM's claim is this one aspect to what makes the Volt worthwhile. As we argued earlier, because the Volt is selling better than the Prius did in its first years, the Volt could be seen as being in a stronger initial position than the Prius which could mean great things for its future. If, that is, GM has enough stick-to-it ability to see themselves through to developing a "Gen 2 Volt" that then becomes the hot car everyone wants.

Morano's tour de farce ends with repeating the bogus $250,000/car subsidy claim. As we discussed a month ago, that $250k subsidy figure is from a badly reasoned "study" by the Mackinac Center for Public Policy that gives an absurdly inflated picture of the government support for the Volt.

Every year our eyes collectively pop out as we learn the amount of money being spent on superbowl advertising, and this year is no different. What we see with Morano's analysis of the Volt superbowl ad is a flimsy argument, that doesn't hold water, claiming the Volt is a dismal flop. Those who don't know just how flimsy an argument it is, would conclude the Volt superbowl ad is a waste of government money, because the car has dismal sales, and is no better than a 116 year old electric car. Instead we know the superbowl ad was bought with GM's money (whether it was wasted is a matter of opinion), the sales are better than the first year of other new technology cars, and the technology in the Volt is vastly superior to the 1896 Roberts Electric Car. Seems that Morano's accuracy is around 10% because we're giving him a bit of credit for Obama's stretch goal of 1 million electric cars by 2015.

Tsingshan's Threat to Tesla: EV Maker Is In Battery Crosshairs
Tesla-Funded Research Reveals One of The Biggest Mysteries of EV Battery
END_OF_DOCUMENT_TOKEN_TO_BE_REPLACED