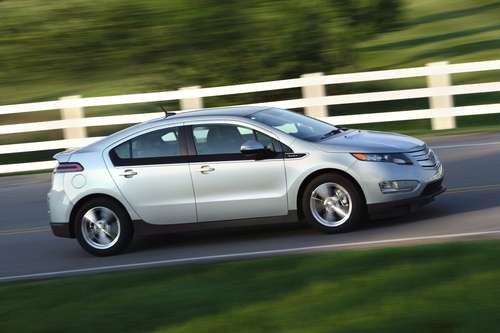 Conservative policy think-tank playing loose and fast with the numbers regarding government spending on the Chevy Volt.
Advertisement

Yesterday the Mackinac Center for Public Policy posted a statement claiming that each Chevy Volt is subsidized to the tune of $250,000 or more. That's caused a cluster of blog posts trumpeting this as if it's a failure of the Obama administrations green technology program, but not so fast says an article on TheStreet. Instead the Mackinac Center's analysis is overly simplistic and downright absurd.

The Mackinac Center's James Hohman identifies a $3 billion figure as the total amount of "subsidy" going to GM and other companies to produce the Chevy Volt. What they're calling "subsidies" are the loans and grants awarded to GM, and several other companies, by the Federal government and several local governments. Some of the awards went to GM for the factories directly used to build the Volt, and some to other companies building factories for electric car battery packs and other parts. For example Compact Power Inc, the U.S. subsidiary of Korean battery manufacturer LG Chem, received a grant to help them build the factory which manufactures the battery cells used on the Volt. GM's assembled the battery packs in their own factory, with Compact Power only supplying the cells. The extent of the Mackinac Center analysis is to name the $3 billion figure derived from adding up the total figure for all grants and loans they could find, then divide by the 6000 Volt's that have been sold.

An article on TheStreet.com, after quibbling a bit over the $3 billion total, says it simply doesn't matter what the total grants and loans package is. The quibble is that $3 billion divided by 6000 is $500,000 per car, not the $250,000 per car they cite, making us wonder about Hohman's abilities with basic math. The flaw in Hohman's analysis, says TheStreet, is to divide by the 6000 Volts that have been sold, rather than the total number of vehicles which will be built in these factories. The grants and loans Hohman points to were for factories that will be operating for many years, some of which will be building components used by multiple manufacturers. For example the Compact Power (LG Chem) plant mentioned earlier manufactures cells not just for the Chevy Volt, but for Ford's electrified vehicles such as the Ford Focus Electric. It would be incorrect to assign the grant for LG Chem's plant solely to the Volt, as Hohman's analysis does.

What's the typical lifespan of a factory? Would these factories built by grants and loans recipients be used only for one year then torn down? That false line of reasoning is what Hohman's analysis suggests. Instead, the TheStreet article suggests considering this as an investment over a 25 year lifespan. How many electrified cars will be built over the next 25 years?

As is typical in every industry the cost to develop technology and production facilities for every product is covered not by the first unit sold, or the first 6000 units sold, but over the lifetime of that product. The absurd analysis by Hohman would have given even more alarming numbers if they'd thought to publish their piece 6 months ago when only 3000 Volt's had been sold, at which time the "subsidy per car" at that time would have been $500,000. Going the other direction, pick an arbitrary day in the future like the end of March 2012. GM will plausibly have sold another 10,000 more Volt's by then, bringing total sales to 16,000 Volt's, and the subsidy per Volt will have dropped to $94000. If GM is successful with their sales goals, total Volt sales at the end of 2012 will be 66,000, dropping the subsidy per Volt to $23000. And that isn't even counting the electrified vehicles Ford will have sold in the same time frame, also using cells manufactured from the same LG Chem plant, the cost for which Hohman wants us to assign solely to GM's Chevy Volt.

The article on TheStreet doesn't stop there, it addresses another myth about the Volt, namely those who derisively call the Chevy Volt Obama's brainchild. Anybody with any memory for recent history knows that GM's then-CEO, Bob Lutz, started pushing for the Volt in 2006 and that the majority of design decisions had been made by late 2008, including the selection of LG Chem to supply the battery cells. The production version of the Volt was unveiled in September 2008, with actual production slated for November 2010. The Volt was already in the pipeline by the time the Obama Administration was elected, and most notably before GM's bankruptcy.

Anton Wahlman, the author of the TheStreet article, describes himself as a conservative commentator "somewhere to the right of Rush Limbaugh on the subject of Government involvement in the economy". While he is rather opposed to this sort of Government spending, he describes this particular case as an example of absurd reasoning and calls the Volt as an "outstanding car" that may be "the best car in the market today".

There are factors here that even Wahlman's excellent analysis does not note. There is a bigger picture than just one car, and a few factories.

First, the push for cleaner cars started years before Obama came to office. The Bush Administration did a fair bit in this direction including the Advanced Technology Vehicles Manufacturing Loan Program, which is still a source of clean vehicle technology funding.

Any way you slice it, the analysis pushed by the Mackinac Center is weak and misleading.

Setting it Straight: Chevy Volt vs the Government