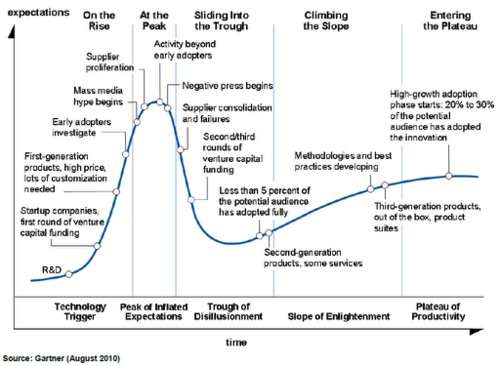 GM's 5-week production halt on the Chevy Volt has given ammunition to naysayers, while advocates like Felix Kramer say it's just a phase in the technology adoption curve.
Advertisement

Felix Kramer, founder of the plug-in car advocacy group CalCars, posed the question today "What's Dragging Down the Volt?" The question comes following GM's five-week production halt for the Chevy Volt, that has led in turn to a flurry of pundits predicting the death of that car because obviously the production halt is a sign that nobody wants the Volt.

Kramer describes this pattern of slow uptake using a graph from the Gartner Group (a marketing consulting group) describing the adoption rate of new technologies. What Gartner calls the Emerging Technology Hype Cycle happens to fit the pattern of public perception concerning the Chevy Volt. The early phase of this curve is extreme interest among early adopters leading to rapidly rising interest and media hype. The next phase occurs when negative press begins, and the early adopters have all adopted the technology. This leads to diminishing interest and a period Gartner calls the Trough of Disillusionment. If a technology is to survive beyond this period, a 2nd or 3rd generation of the technology must be developed, implementing lessons learned from the 1st generation adopters.

Many products in many areas of technology have followed this pattern. For example the original Microsoft Windows did not take off until version 3.1 was developed. The Toyota Prius did not take off until the GenII Prius was developed. Some technologies never make it out of this trough, for example Apple's Newton MessagePad suffered horribly from negative press and while Apple's engineers vastly improved handwriting recognition in the last model, the product was still killed and to this day Apple firmly eschews stylus's. But, let's get back to the Volt.

As Kramer notes, in January GM's CEO Dan Akerson said the Chevy Volt had been turned into a political punching bag in the wake of the battery fire controversy. The negative press about the Chevy Volt began long before that particular controversy, with Rush Limbaugh weighing in with cluelessly incorrect incoherent rants against that car as far back as August 2010. Some examples of negative media coverage includes the "study" with bogus reasoning claiming each Volt had $250,000 of government subsidy, or the faux controversy over GM's superbowl ad for the Chevy Volt, or the bogus claim by Gingrich that you can't put gun racks in a Volt, as well as the whole controversy over the single Chevy Volt battery fire that has the likes of Bob Lutz saying that bashing of the Chevy Volt by right wingers is harming America. The hype on the Volt says the car is a "firestarter" ready to burst into flame at a moments notice, while in truth it is a car with 5-star crashworthiness ratings, in which there was a single fire resulting from crash testing, which GM and the NHTSA closely studied, wrote a detailed report, and developed a fix for the flaw found by forensic researchers.

What about the 5-week production halt on the Chevy Volt? Is it an indication of the Volt's imminent failure? Kramer suggests this is the current key meme to counter-act because the naysayers are already pushing the idea that low Chevy Volt sales means it's a failure. Kramer first suggests that in light of the information we've just covered, the Volt is simply entering the "Trough of Disillusionment" phase where the negative press is taking its toll. While the production slowdown looks bad, it's better than having an inventory glut. However for the well-being of us all, Kramer says "It would be a mistake to conclude from the pause that it's time to ratchet DOWN our expectations for the Volt" and that we "still need to find ways to get hundreds of thousands of them on the road." In other words if he were asked whether GM should kill the Chevy Volt, stand pat, or create the Volt2, Kramer would have GM double down and develop the Volt 2.0.

What about the Chevy Volt price? Kramer wants us to know that GM is offering a $350/month lease program, and he echo's the opinion of many by saying "purchasers need to hear Volt owners crow that they got a BMW-level car at half the price." GM is partly at fault in Kramer's eyes by positioning the Volt next to the Cruze, when if it had been badged with a Cadillac name nobody would have batted an eye at the price.

A resource GM could leverage is the enthusiastic owners of Chevy Volts. An example is the group of Volt owners who banded together with a letter to GM saying they wouldn't hand over the keys to their cars in the wake of the fire controversy. In the Chevy Volt Owners group on Facebook, the Volt owners routinely exclaim how much they love their cars, come up with new ideas that GM should put into advertisements, and more. This sort of enthusiastically loyal customers are gold to companies, if only GM can effectively tap the enthusiasm. Kramer has identified at least four clusters of prospective Volt owners: "fans of early technology, people who don't want to fund petro-dictatorships, environmentalists, and the LOHAS market segment (tens of millions of households willing to pay more up front for Lifestyles of Health and Sustainability)."

Yesterday GM's CEO Dan Akerson met with a group of Volt owners in San Francisco, talking with them for an hour in part about the production slowdown. A report in the facebook group from Fred Ehnow had Akerson assuring the group the slowdown was "nothing more than a matter of keeping inventories in line with demand" and that "we are not backing away from this product." Akerson also noted GM also had a two-week production shutdown in November for the Chevrolet Cruze, and nobody made a fuss over it. Today GM announced a production halt on the 2012 Chevrolet Camaro ZL1 because of quality issues, and is anybody making a big fuss over it?

It is, of course, up to GM's management to decide the course that GM takes. GM appears to be taking a stand to stay with the current course. Toyota had enough sticktoitiveness to stay with their course through the Prius Trough of Disillusionment. Will GM have the same strength of fortitude?

kickincanada wrote on March 9, 2012 - 12:24am Permalink
I’ve owned a Volt since Sept 2012 and it’s a pretty cool car. I'm not an environmentalist (previous ride was a Ford Expedition) but it's not as expensive as one would think. Ontario gov gives you $8500 and you will save about $2000 a year in gas and maintenance (oil changes once every 2 years, brakes last 100K minimum). So over 5 years thats 18.5K towards the purchase. So about $30K for a really advanced car is actually in line with the average cost of a new car these days. Its range is pretty good - 75Kms in the spring/summer/fall on battery - more if you use gas. If you charge at work or in between drives you can actually go 100-200kms per day on electric - basically you get to give the oil companies the middle finger when you drive by the gas station. Weird to spend more on car washes than gas. I routinely buy $2 gas just to get the discount on the car wash at PetroCanada. And my hydro bill (which in Ontario is not really sourced from coal at all) has gone up about $45 a month (including all those surcharges). I also love the fact I’m using a domestic source of fuel, not relying on sources of energy produced by hostile regimes, and buying a car made in North America! One more thing - the battery will likely outlast the car. The battery and all electrical components of Volt, Leaf, etc are warrantied for 8 years / 160,000kms. In California it is for 10 years. The car will fall apart before the battery goes. And even if the battery failed outside of warranty period, for the Volt it is $2400 to replace which is not bad. Me at that point 8+years out I would simply run my barely used ICE and be satisfied with the 35-40mpg on ICE only as I would have made my money back years ago. Bottom line is the Volt is a great fun car with great service and support from GM. People really need to get out and test drive one. And it looks great to. David, Ottawa