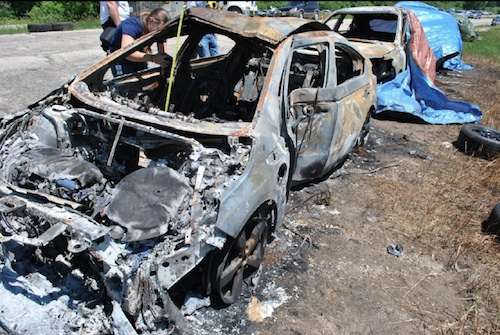 In a politically charged Congressional Hearing held today, the safety of the Chevy Volt, and the integrity of the NHTSA, was called into question by members of the House Committee on Oversight and Government Reform. The sometimes heated hearing gave both the NHTSA and GM an opportunity to defend their investigation and response to last summers Chevy Volt crash test fire.

The hearing began with NHTSA Director David Strickland, testifying on the NHTSA's investigation, and it was Strickland who received the brunt of attacks by some committee members, primarily the Chairman Rep. Jordan, Rep. Mike Kelly, and Rep. Issa (all Republicans). Stricklands testimony was followed by GM's CEO Dan Akerson, testifying on GM's role, GM's resurgence as a company, and the history of the Volt project. Those two were followed by John German, a Senior Fellow with the Council on Clean Transportation who gave testimony on the CAFE Standards negotiation as well as the background of lithium ion battery safety.

While several talked about the politically charged scene none captured it better than GM's CEO Akerson when he said GM's engineers had not designed the Chevy Volt to be a political punching bag.

While a huge variety of topics were discussed, a thread throughout the hearing was the sense of Trust being Violated. Specifically Trust in the Integrity of the NHTSA in their handling of the Chevy Volt fire controversy. The elements of the eroded trust were represented by the sort of questions asked, which appear here in bold.

What did the NHTSA know and when did they know it? What was the timeline of discovering the cause of the fire? Why did it take six months before disclosing the fire to the public? Both NHTSA's Strickland and GM's Akerson answered these questions to show there was no wrong-doing, but their answers did not appear to satisfy Rep's Jordan, Kelly or Issa each of whom repeatedly hammered Strickland and to a lesser extent Akerson.

Disclosure to the public of the Chevy Volt crash test fire occurred with a November 11 Bloomberg News article, and was closely followed by announcements from NHTSA and GM. Rep. Jordan described this as NHTSA holding out on making an announcement until being "outed" by Bloomberg's report. However NHTSA Administrator Strickland maintained that the NHTSA was very close to making their announcement anyway, and that NHTSA's personnel had worked with Bloomberg's reporters on ensuring the facts were reported correctly. Strickland went on to describe that prior to November 11 they were involved with preliminary pre-investigation work necessary to discover just how severe was the risk posed by this one fire. The NHTSA has a statutory duty to disclose risks to the public, but that statutory duty also extends to determining actual risk before disclosing a risk to the public. In other words, the NHTSA's role is not to shout FIRE in a crowded theater if there's no actual fire, but to only disclose actual risks based on data they collect from investigations.

Administrator Strickland explained it would have been illegal for NHTSA to disclose a risk if there was no actual risk.

See Chevy Volt fire: What did NHTSA know and when did they know it? for details on the work by NHTSA investigators to devise new test procedures to test the battery pack in isolation from the Volt. The NHTSA never does "component-level testing", instead they always test whole vehicles. Because they had been unable to replicate the fire, even after crash testing several more cars in September 2011, the investigation team proceeded to "component level testing" of the battery pack. This required designing test procedures and building equipment, with the tests occurring in mid-November. GM's Akerson characterized those tests as "impaling" the battery pack to puncture it, then drenching the pack in coolant while rotating the pack through several positions. Meaning the tests in November and December were designed to artificially induce the flaw (punctured battery pack, and leaked coolant fluid) identified by the forensic investigation between May and November. Even having artificially induced the flaw, it took a week for the tested battery packs to catch fire. While investigators proved they could cause the Volt battery pack to catch fire, it was in an artificial situation.

This explanation of the timeline before publicly disclosure of the fire was not good enough for Rep's Jordan and Issa. In one exchange Rep. Issa demanded why GM's executives hadn't flown in, fully briefed, 3 minutes after learning of the fire back in June. If this, three minutes worth of investigation to understand the cause, is Rep. Issa's criteria for NHTSA being a credible agency, it looks like an impossible criteria to meet. As both Akerson and Strickland explained, in June it wasn't clear what the cause of the fire. It could have been arson, the fire could have started with another vehicle in the storage lot, was it a bad test, and they hadn't torn down the burnt Volt to determine why or how it caught fire. How could NHTSA or GM have credibly warned the public over risks when there was little data about what had occurred?

Did GM and NHTSA or other Administration officials collude to hide anything from the public? Rep's Jordan, Issa and Kelly all discussed the risk of collusion, and the motive for collusion, likening the Volt as a "halo car" not only for GM but for the Obama Administration's green jobs green technology vision. Both Strickland and Akerson denied any collusion in the face of several questions along those lines.

Did the NHTSA follow correct protocol in handling the crash tested Volt? These questions echo'd GM's long-time assertion that there must be a "depowering" protocol following the crash of an electric vehicle. Depowering the battery pack was likened by Akerson to be similar to connecting a huge light bulb to the pack and letting it run down until there's no more electricity in it. The question asked by the committee was whether NHTSA knew of the need to depower crashed battery packs, and why didn't they follow this procedure following the Volt crash test. A further question was if emergency workers across the country know how to handle battery packs in crashed electric vehicles.

Prior to this incident the test protocol for gasoline vehicles was to empty the gas tank and disconnect the 12 volt battery, while for electric (and hybrid) vehicles the protocol was to drain the gas tank (if any) and disconnect all batteries. The protocol did not include depowering the batteries, however. Akerson explained that the Volt fire incident taught them something, that they learned of the need to depower electric vehicle batteries after a crash.

Are lithium ion batteries safe? Rep. Issa named an explosion at a lithium battery plant several years ago, as well as the Sony laptop fires from 2006, asking if these batteries are safe for use in cars. The history of lithium batteries do include instances of intense fires that can't be put out by normal means. One has to understand, as all three witnesses explained, that the flammability of a specific lithium ion battery depends on the specific battery chemistry. Some lithium chemistries are explosive while some are safe, and it's a battery design engineering challenge to avoid thermal runaway conditions (fire). All the automakers know about this and are choosing cells with safe chemistries. The LG Chem cells used on the Volt are regarded as safe. During the hearing nobody asked how, then, did the Volt battery pack catch fire if the cells are regarded as safe. The NHTSA report released last week identified the most likely cause as a combination of an internal short circuit between some cells due to physical damage to the pack, combined with short circuiting induced by the coolant fluid.

Are electric cars as safe as gasoline cars? This question was primarily fielded by John German who explained relative statistics of car fires in gasoline and electric cars, as well as the safety characteristics of lithium batteries we just discussed. The statistics say that over the last several years there have been 287,000 gasoline car fires per year, with 487 deaths, and extensive property damage. That's a rate of one fire per year per 1000 gasoline vehicles. Why? Gasoline is a flammable liquid that's explosive in certain circumstances. If the rate of gasoline car fires were also true for electric cars there would have been 17-18 electric car fires during 2011. Instead there have been no electric car fires, hence EV's are safer than gasoline powered cars. John German characterized one fire in the crash tested Chevy Volt as an isolated incident.

Is the Chevy Volt safe? Strickland professed it is, saying that not only would he drive one he'd drive his mother, wife and younger sister in a Volt. Akerson professed it is, and that not only had he bought one for himself, he'd driven that Volt from Detroit to the hearing. It received five star crashworthiness ratings in every test. Its up to automotive engineers to manage the risks in any car, electric or otherwise. Those who drive gasoline cars are carrying a tank full of potentially explosive gasoline, where fires are so common they aren't even reported in the news, but somehow as a society we collectively take that risk every day. Lithium Ion batteries chosen for automotive use are regarded as safe, but of course any vehicle is only as safe as the person driving it.

Shouldn't Rep. Kelly have recused himself? Nobody asked this question but his dual role as both a U.S. Congressman, and as the owner of a Chevy dealership, appeared odd as he questioned GM's CEO Dan Akerson. Effectively Rep. Kelly was questioning his boss and one wonders what line of reasoning is used to say there was no conflict of interest.

The Chevy Volt has the highest customer satisfaction rating ever measured by Consumer Reports. GM is using technology developed for the Volt in other cars, and GM plans to begin exports of the Volt in 2012. The Chevy Volt was named Car of the Year by several publications. In almost every respect it is a successful car, that has unfortunately become a political punching bag.