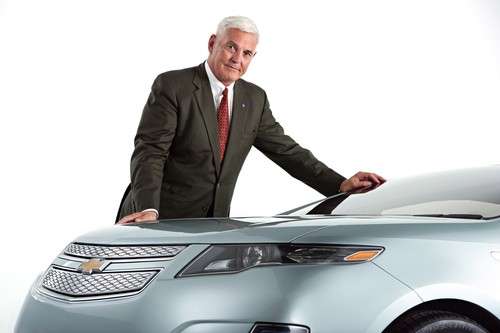 A couple weeks ago Bob Lutz, GM's former CEO and Chairman, and Father of the Volt, wrote a piece for Forbes in defense of the Chevy Volt. Today he is back, in Forbes, with a new piece saying that the Volt bashing from right wingers is harming American workers by tearing at an American company, and American ingenuity.

In today's piece Lutz drew a contrast between the dangers of gasoline powered cars, the frequent recalls and fires in gasoline cars, and the hyped up controversy over the single fire in a Chevy Volt three weeks following an extreme crash test. The argument Lutz makes is that the extreme right-wing "gas-bags" in the mainstream media are constructing a false story about the Volt, "for the basest, crassest, politically motivated propaganda assault." The real goal of the propaganda assault is something else (such as an attack on President Obama) but the side effect will be reduced demand for the Chevy Volt, making American factory workers the real victim of these attacks. Along the way Lutz specifically names Bill O'Reilly, Lou Dobbs and Rush Limbaugh while referring also to a chorus of other "extreme-right talking head gas-bags" in the media.

This is strong stuff, and Lutz's piece today reads more like a rant than did his previous piece, but at the same time he raises points worthy of consideration.

The record for automobile safety can look horrendous after studying the number and kind of recalls which occur. Lutz talks about there being 178,000 car fires per year in gasoline cars (other sources name 250,000/yr) which is a rate of one gasoline car fire every 2 minutes. Most of the car fires are the result of "accidents or malfunctions, like fuel leaks or electrical shorts" and they burn everywhere, "on the roads, while parked, while in the garage, while fueling, or after a collision." Here on TorqueNews we've recently reported on a recall of the 2012 Chevy Sonic recall for missing brake pads, a recall of 500,000 cars from VW, Audi, BMW, for Fuel Leaks, that BMW was ordered to pay $3 million for untrustworthy recall practices and much more.

Gasoline car fires are so common they aren't reported anywhere. These sort of safety recalls happen every day, but are barely mentioned in the press. Why? Lutz asks, where is the rage over this? Or, more to the point, why is there the over-blown hyped up controversy over the single Chevy Volt fire.

It's helpful to review the facts of the Chevy Volt fire, as well as the recent congressional testimony by GM's current CEO Dan Akerson, both to understand Lutz' points, and to put the so-called reporting from the right wing media figures Lutz refers to.

In May 2011, crash tests of the Chevy Volt was performed by a NHTSA contractor in Wisconsin for the NHTSA New Car Assessment Program (NCAP). The Volt passed with flying colors, and on June 6 the NHTSA announced the Volt had received a 5-star crashworthiness rating. Unfortunately on the same day, 3 weeks after the crash test, workers at the site of the crash test found that the crash-tested Volt and four other cars had caught fire and burned completely the weekend before. That set off an intensive forensic study by the NHTSA and others to determine the cause of the fire, and later to attempt to replicate the fire. The cause of the fire turned out to be tricky to duplicate, and NHTSA repeated the same crash test a couple times in unsuccessful replication attempts. It wasn't until November that they were able to test the battery packs in isolation, performing a test similar to the crash test, douse the battery packs with extra amounts of coolant fluid, essentially forcing the battery packs to catch fire. Even then it took a week for fire to break out.

What was the vulnerability found by investigators? A piece of metal had punctured the battery pack, breaking cells and coolant lines in the pack, spraying coolant on circuit boards, and apparently causing internal short circuits in the battery cells. The puncture required a combination of crash forces that NHTSA was unable to replicate in following crash tests, even after having identified the flaw. GM developed an engineering fix for the vulnerability and has since been implementing that fix in the Volt fleet, and at the factory.

What Lutz points to is a huge contrast between a hyped up controversy over the Chevy Volt, and the lack of real danger from the Volt, and the clear and present danger of other vehicles in the fleet. They carry around explosive liquids which do catch fire on occasion, and have safety defects for which automakers routinely convene recall procedures.