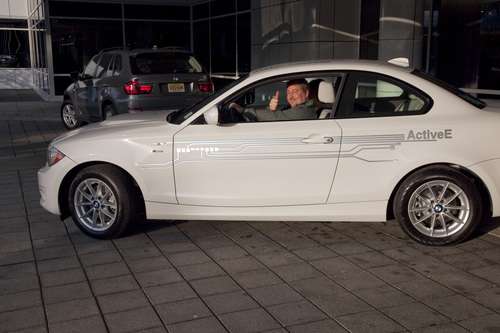 BMW delivers first ActiveE car to the first of 700 U.S. based Electronauts

The ActiveE is phase two of BMW's project i which is developing an electric car technology leading to launch of the BMW i3 and i8 in 2013.
Advertisement

In July 2009 BMW launched the Mini-E program in which several hundred "Pioneers" who would lease a converted electric Mini Cooper in exchange for giving BMW feedback and data about real world electric car usage. Today BMW launched the second phase of BMW's "projject i", their electric car program, by delivering an ActiveE to Tom and Meredith Moloughny, who were previously participants in the Mini-E program, driving Mini-E #250.

The ActiveE delivered today to the Moloughny's car is a limited production electric car based on a BMW series 1 coupe. It is built with drive train and electronics equipment BMW intends to use in production of the BMW i3 and i8 scheduled to go into mass production some time in 2013. It is a two-door coupe, with seating for four, and a full trunk in the rear. The 32 kilowatt-hour battery pack provides a 100 mile range, and the 125 kilowatt (170 horsepower) motor provides maximum torque of 250 Nm / 184 lb-ft and 0-60 times of around 8 seconds.

The liquid cooled battery pack is built by BMW using cells explicitly, designed for automotive use, from SB LiMotive. The car is arranged so that no cargo or passenger space is lost, unlike on the Mini-E's where the back seat was taken up by the battery pack. According to Tom Moloughny, the first ActiveE recipient, that the ActiveE "feels like any other series production car would".

About 1100 of the ActiveE's have been produced with 700 allocated to the test program in the U.S. Just as BMW called the Mini-E participants "Pioneers", the ActiveE participants are being called "Electronaut's". Their two year mission is to lease what BMW calls "the only car that is 100% Electric and 100% BMW," explore their surroundings with their ActiveE, and provide data and feedback to BMW.

If this were a software application we'd call it "beta testing," where customers are given pre-production widgets, and tasked with providing real world testing feedback. BMW promises to use roll everything they learn from the Electronauts into the BMW i3 and i8, expected to go into production in 20 months hence.

In the 2 1/2 years the Moloughny's possessed Mini-E #250, they charged it up 1,383 times and drove it for about 72,500 all electric miles. In a blog post by Tom Moloughny he said that even with a 100 mile range that many call limited, they had been able to use their Mini-E as their primary car. Meaning "it was always the car my wife and I went to first." At 30,000 miles/year of driving he admits to driving much more than the average American, but the Mini-E never left him stranded. So much for the "limited car can only be the secondary car" meme.

BMW's opinion is it's best to develop purpose built electric cars rather than adapt a gas car to be electrically driven. While the Mini-E and ActiveE were and are adapted gas cars, this was to enable gathering real world testing leading to the i3 and i8 promised to be delivered in a couple years time. The other automakers aren't running this sort of beta program, and it's interesting that BMW is able to solicit customers willing to pay a full lease for the privilege of participating in the program.

The BMW ActiveE will be available for lease in the metropolitan markets of Los Angeles, San Diego, San Francisco, Sacramento, New York, Boston and Hartford for $499 per month for 24 months with a down payment $2,250. Anyone in those markets interested in leasing one of the 700 BMW ActiveEs coming to the US should visit www.bmwusa.com/ActiveE.