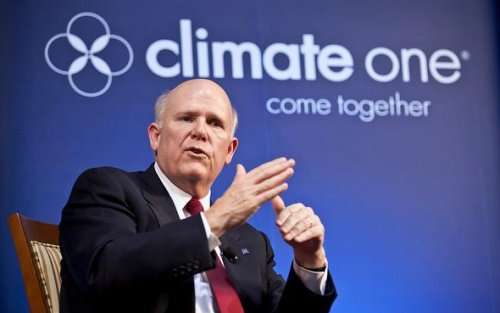 Last week in an interview with the Commonwealth Club, GM's CEO Dan Akerson talked frankly about the auto industry bailout, the role of government in shaping industry, the responsibility of industry to be part of the solution to climate change and other problems, and battery technology that could deliver a 150-200 mile range Chevy Volt.
Advertisement

GM's CEO Dan Akerson made a pair of appearances in San Francisco last week in which he made a strong case for the Chevy Volt, improved fuel efficiency, as well as the government playing a role in shaping industry. His comments come amid a swirling politicized controversy surrounding General Motors, the Chevy Volt, global warming, automakers efforts to reduce environmental impact, and the automobile industry bailout. Akerson made it clear that the "new GM" (as he called it) was intent on being part of the solution, rather than being obstreperous, and to that end that GM is exploring every alternative to gasoline, every fuel efficiency technology, and will continue developing vehicles like the Volt.

Clearly Akerson's answer to the question "Should GM kill the Chevy Volt, stand pat, or create the Volt2?" is not only to build the Volt 2.0, but he described it during an interview with the Climate One program of The Commonwealth Club.

GM's Dave Barthmuss reported, on thefutureiselectric.com, about a lunch-time meeting between Akerson and a group of 30 Chevy Volt enthusiasts to talk about GM's commitment to a sustainable future. Akerson, a Volt owner himself, talked of having burnt only 1/10th of a gallon of gasoline since February, and that among the Volt owners in the meeting one had driven nearly 13,000 miles on the initial tank of gasoline sold with his Volt.

The interview with Climate One host Greg Dalton was an hour of wide ranging and frank discussion about GM, the auto industry bailout, fuel efficiency, the Volt, and much more.

Akerson described the New GM as a company that can no longer be internally focused, that GM must focus on the evolution of the automobile industry, to look forward to see where the market conditions are going, to position GM correctly in the future, especially in regards to meet expected future environmental, fuel efficiency and fuel flexibility standards. As he put it GM "can't afford to focus on the near term" but must ask "What will market conditions be like in 2030?" In saying this it's as if Akerson's take on GM's bankruptcy is that GM wasn't focused on the actual direction the market was taking, but on attempting to manipulate the market forces in a way that ultimately led to GM's bankruptcy.

Speaking on the auto industry bailout, Akerson comes across as a big champion of that process. His former position was "Head of Global Buyout" at the Carlyle Group, making him well suited to critique the U.S. Government's role in the auto industry bailout. He noted there are "multiple options or avenues to a successful restructuring" of any troubled corporation, and that, in his opinion, as someone who had a front row seat, was that "it was coming off the wheels," meaning that GM was about to disappear completely. The cost if GM were to have failed would have been 1 million jobs, $150 billion in lost taxes, and deep damage to America's industrial infrastructure. The old adage "What's good for GM is good for America" comes to mind, but clearly Akerson's opinion is that, in the context of the deep recession of 2008-9, that another 1 million lost jobs would have turned the recession into a full scale depression.

Akerson noted that two Presidents (Bush and Obama) "put money into this company" (GM) and that neither "were running for office at the time." This fact flies in the face of the political spin machine that's trying to pin the bailout solely on Obama's shoulders, when in truth it was a bipartisan effort. That the leadership in that time "made the pragmatic decision to save this company" rather than take the cost just outlined. For that matter, is the bailout a failure as the spin machine might have us believe, or is it a success? By Akerson's reckoning, it is not only a success, but Americans "ought to be very proud our government stood up regardless of party affiliation" to do the bailout.

What about the "Government Motors" aspect to the company, the fact that the Federal Government directly owns a large chunk of GM. First, Akerson noted that GM has already paid back the government loans, as well as paid back the Preferred stock owned by the government. GM's IPO was the largest IPO in the history of modern finance, and a large chunk of those shares went to the Federal Government, leaving the U.S. owning 27% of GM "on a fully diluted basis". Akerson describes the Government as if it were any other share-holder, and the Government could sell those shares any time it likes, but that it has not done so. However, if the Government were to sell its holding that would depress GM's stock price. Instead of selling these shares all in one chunk, Akerson suggested the Government begin a timed sale of these shares over a 10 year period.

Akerson asked these questions: "Is the federal government a private equity firm? Or was it acting on behalf of we the people? Was our economy, was our citizenship, properly served?" He then went on to say "governments help their companies to, without too much of a heavy hand, shape and mold the direction of technology and how the economy evolves," and that "it's something that is pragmatic" and that it's "done for companies around the globe all the time." A moment of pondering this and we recall that governments make regulations, governments set policies, that governments often form "public private partnerships" to achieve certain goals, that governments have made grants or loans to companies a zillion times over the years, and that this has gone on for decades. For example the whole of the computer & technology industry (and the Internet) was goosed into being through a wide range of government support over the decades, often for technology developed originally for military use and then repurposed for consumer electronics gizmos. The Internet began its life as a Department of Defense project to connect military command and research institutions, and that if the Government had not funded the Internet's initial development it simply would not have existed in the form it takes today, if at all.

All through the interview Akerson glowingly described GM's efforts to decrease the environmental impact of its operations, and the vehicles the company sells. For example most of GM's plants have drastically reduced energy consumption, several are now powered by methane coming from landfill gas, and GM has almost completely eliminated the waste sent to landfills. What's even more interesting is the efforts GM is making to build cleaner vehicles.

Why? The purpose is two-fold, first to decrease the environmental impact of the vehicle fleet, and second to transition away from fossil fuels. Again, the New GM, in Akerson's mind, acts proactively to be part of the solution rather than to be an obstreperous obstruction. GM was a willing participant in the CAFE standards currently being proposed. He noted that due to the EPA, "the air and water is cleaner today than it was in the 50's and 60's" and it's Akerson's belief that "it ought to be even cleaner tomorrow than it is today."

Interestingly GM has developed a new engine, announced last week, that can run on either gasoline or Compressed Natural Gas (CNG). It took some work on lifters and carburetors and whatnot, the cost is a bit more than the pure gasoline counterpart, but not prohibitively so, and such an engine clearly positions GM to sell CNG vehicles in the not-to-distant future.

One of GM's operations is GM Ventures, a fund that invests in promising companies developing technology that could be useful to GM. Akerson used one of those investments, Envia Systems, to describe what could be thought of as the Volt 2.0. That company has developed battery technology claimed to drastically reduce the cost of lithium ion batteries, and to drastically increase the energy density. Currently the Chevy Volt has a 400 pound battery pack, 16 kilowatt-hours, that can drive the Volt for 35-40 miles on electricity alone. Akerson variously described an Envia-powered Volt has having a 140 or 240 mile range and that "battery technology will improve over the next 5, 10, or 15 years".

However, as Climate One host Greg Dalton noted, many are calling the Volt a failure, the most recent example is the five week Chevy Volt production halt. Akerson noted that "you never have perfect knowledge of what the market is going to do" and that any automaker is going to "match production with inventory." Even the Chevy Cruze, one of the top selling cars in America, had a two week production halt last fall. A production halt that nobody noticed, whereas because of the intense politicization of the Chevy Volt everybody knows about its production halt.

Why is the Chevy Volt good for America? Akerson answered “the Volt represents American innovation, American ingenuity…the best of this country and the best from this company.”