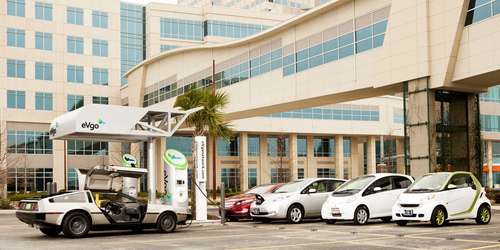 NRG is attempting to satisfy concerns over the company's deal with California to build a large electric charging station network, providing answers and solutions to most of the questions that have been raised.
Advertisement

Three weeks ago Gov. Jerry Brown and NRG announced a deal that is a huge step toward building the electric car charging infrastructure that California needs to meet the states environmental goals, but some electric car advocates are raising concerns and questioning whether the the deal will be good for California's electric car drivers. Late last week NRG provided a pair of documents previewing the proposed agreement between the company and the California Public Utilities Commission (CPUC). The documents answer most of the concerns and provide a glimpse into how the project is likely to progress over the next four years.

NRG's settlement deal with California breaks down to a $20 million payment to the CPUC, and a $100 million amount that will pay for a large electric car charging network. The network will be built and owned by NRG's subsidiary eVgo, a company which is already operating electric car charging stations in Texas. The documents we received from NRG's David Knox break out some of the details of how that $100 million will be allocated to different projects. However the deal is not finalized and has not been presented to the Federal Energy Regulatory Commission for approval, meaning it's possible the details will change.

The stations will be available both to eVgo members, and on a pay-as-you-go basis costing "no more than $10 per charge during off-peak hours and $15 per charge on-peak." This directly answers the Open Access concern raised by some advocates.

A $40 million investment in electrical infrastructure to support the installation of a minimum of 10,000 additional charging stations: This consists of all the wiring and trenching and conduit necessary to make it possible to install an electric car charging station. NRG calls these a "make ready" because the effect is to "make" a location "ready" to install an electric car charging station. There will be at least 1,000 "make ready" locations, primarily at multi-family housing locations (apartment buildings) and workplaces, but also areas of public interest like schools and hospitals.

The distribution of make ready locations will be in similar proportions to the Freedom Stations (the majority in the LA Basin), except that each "make ready" must be within the service area of an Investor Owned Utility. The cities that run their own municipal electric utility, that are not Investor Owned, will not be allowed to have any of the NRG-installed make ready locations. The reason for this has to do with arcanities of the legal settlement this deal springs from.

A concern that's been raised is whether the settlement could dry up opportunities for the existing networks to expand further. The terms described so far gives NRG preferential access to the make ready sites, and it's plausible NRG could choose to take those sites for themselves, depending on how the company sees its business interests unfold. On the other hand, NRG could leave the make ready sites for others but competitors will be locked out for 18 months.

A $5 million investment in development and deployment of new EV charging services: This is a loosely defined allotment of money to long range research and development projects. NRG suggests it could be used to develop battery based electricity storage systems, or higher powered fast charging stations, or a vehicle-to-grid pilot program. An electricity storage system would reduce the cost for running a fast charging system by eliminating the demand charges. Today's DC fast charge stations are connected to 480 volt 3-phase AC power connections, and while a car is charging the station will draw tens of kilowatts of power. This type of usage results in high fees because of the spikes in electricity demand. Additionally eVgo could earn secondary revenue by configuring the electricity storage system to also provide grid stabilization services.

A $4 million investment in additional EV charging services and EV charging technology: This is also a loosely defined allotment of money, this time for undefined long range research and development that is yet to be agreed between NRG and the CPUC.

NRG has said little so far about interoperability between the electric car charging networks. When pressed on this, NRG's David Knox suggested the market right now is immature likening it to the early days of cell phones and incompatible cell networks. Where in the past cell phone users had to worry about roaming charges or an inability to connect to the right cell network, those things are in the distant past. As electric vehicle charging networks develop perhaps, as Knox suggested, interoperability agreements will be made between the networks. In the meantime this means we'll be stuck carrying membership cards for several networks.

Concerning transparency, or the ability of an electric car driver to know the cost to recharge at a given station, we have yet to see the eVgo stations in California. NRG promises the stations will be open to access to any electric car driver, but will there be signage disclosing the cost to use the station? Today the Blink network has a known cost to charge, that's the same at all Blink charging stations. However on the ChargePoint network the cost to use each station varies from station to station, with some costing $3.00 per hour (or more), and the ChargePoint stations do not have signage disclosing the cost.

Some describe the $10-15 cost for a non-eVgo-member to charge at a Freedom Station as excessive, as is the $7-15 fee to use the 350Green fast charge stations. is this price gouging? Depends on what value you place on being able to refill the battery pack quickly. The cost is high enough to make the cost-per-mile much higher than a gasoline car owner's cost-per-mile. However, there is the high demand charges eVgo and 350Green have to pay to operate the fast charging stations.

The success of the electric car charging stations depends on whether the deployment locations make sense. NRG is committing themselves to consult with local government leaders, electric vehicle owners, advocacy groups, and other stakeholders, to "ensure that the network meets the needs of EV owners, present and future." An example of this outreach is a phone call by the director of eVgo's deployment in California, over last weekend, with a joint meeting of the BayLEAF and Silicon Valley Electric Auto Association groups. He spent 5-10 minutes discussing the plan and fielding questions from the audience of over 100 electric vehicle owners. The company is reaching out to set up face-face meetings with local electric car owner groups throughout California.