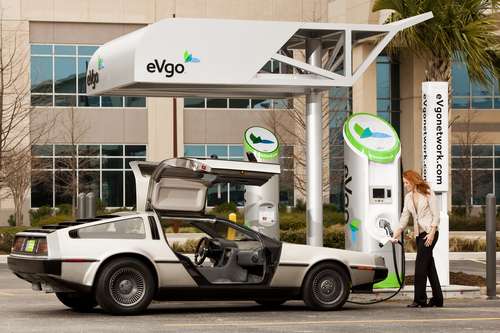 Three weeks ago California Gov. Jerry Brown and NRG announced a deal that both settled one of the legal cases arising from the California energy crisis a decade ago, and also started a huge step toward building the electric car charging infrastructure that California needs to meet the states environmental goals. The deal was glowingly positioned by the Governors office as a $120 million settlement paid by NRG, in return for which California will get an EV charging network. However and not all are happy with the deal and are making their concerns heard. NRG has answered most of the concerns and is reaching out to advocacy groups to satisfy the red flags.

The deal is worth $120 million, and settles the lawsuit filed by California against an NRG subsidiary that was one of the companies involved in illegal manipulation of California's energy markets a bit over 10 years ago. The money is split into two parts, a $20 million payment to the California Public Utilities Commission (CPUC) and $100 million that's going to build an electric car charging network over the next four years.

In our prior coverage we noted that while California describes this as a "settlement", NRG describes it as an "investment", and NRG will end up with a large electric car charging network business in California as a result. That fact has the potential to be controversial, for example a San Jose Mercury News article quoted Marin County Supervisor Steve Kinsey, co-chairman of the EV Strategic Council as saying "We feel like this rewards a bad actor in the energy field with another opportunity to dominate the market." What has the electric car advocates stirred up are concerns and uncertainty over how eVgo will operate the network.

Unfortunately, nobody but NRG and the CPUC have yet seen the actual agreement. The agreement is still being negotiated between California and NRG, and the first opportunity we'll have to inspect the terms is when the deal is presented to the Federal Energy Regulatory Commission (FERC) for approval.

NRG is saying all the right things about the terms of the deal, for example that it will give open access to the charging network, and that the deal will not undermine the existing charging networks (Blink and ChargePoint) already operating in California. However, as Jay Friedland of Plug In America said, "the devil is in the details".

Generally the concern is in the membership model eVgo uses currently, compared to the way owners of gasoline cars refill the gas tank. When a gas car runs low on gasoline, the car driver can pull into any gasoline station, pay some money, and refill the gas tank. It can even be a totally anonymous cash transaction. No membership clubs are required, though one can get credit cards that pay rewards points for buying gasoline.

In Texas, eVgo's network uses a cellphone-like model. An electric car owner can, with eVgo, forego paying the $3000 or more to buy and install an electric car charging station (EVSE) at their home. While an EVSE can cost as little as $600, installation and permitting can be quite expensive and time consuming. Instead, by joining the eVgo network, the charging station will be paid for and installed by eVgo, while being responsible for paying a monthly membership fee that covers the charging station and all electricity at home. For an added fee the eVgo member can access the company's public charging stations to recharge their car while out and about. The eVgo membership agreement is very similar to the "free" cellphone deals offered by cell phone companies.

Jay Friedland, of Plug in America, an advocacy and consumer watchdog group focusing on electric vehicles, provided these characteristics which should be built into the deal: 1) Open Access allowing any EV driver to use any public charging station, 2) Interoperability between charging station networks, so electric car owners don't have to join 10 different networks, 3) Transparency informing an electric car owner the cost for using a specific charging station, 4) Ability to buy out of deals like NRG's membership program, just like we can buy out of a cell phone contract at a fee, 5) Consumer pricing protection to prevent price gouging at charging stations. Most of these concerns have been answered by NRG.

Another concern is the effect this deal may have on existing electric car charging network operators. Namely, whether the eVgo deal will dry up opportunities for the existing networks to expand further. The charging stations in each network are built in collaboration with other companies such as Wallgreens, Whole Foods, private businesses (for employee use), and parking lot operators. The question is whether prospective hosts of public charging stations will wait to make a deal with eVgo rather than make a deal with the existing networks? The mental calculus may go something like "I'll wait and not pay for a charging station since I can get a free one from eVgo."

However the deal does not give eVgo a monopoly position in California's electric car charging landscape, and it does not prevent eVgo's competitors from making similar infrastructure investments.

California's settlement with NRG will result in a huge increase of investment in California's electric car charging network. A more comprehensive charging network should encourage more people to buy electric cars, so long as the stations are placed well. While the concerns raised above are legitimate, they may be sour grapes from eVgo's competitors (Coulomb Technology, ChargePoint, Ecotality, Blink, 350Green, and others).

JRRead wrote on April 18, 2012 - 1:26am Permalink
The $100 m "investment" is a transfer of a liability to the California ratepayers to a major protected control position, an investment for NRG which will thwart competition for over 5 years. If all companies could convert debt to new businesses lit would be kaos. Competitors investments have to come from their own equity, not from a fractional settlement of a $940 m claim for price fixing with the likes of Enron in the California energy crisis. And now tthese same bad actors are ceded a major protected investment position in an electricity providing sector. The CPUC is relying on this group to use "their best business judgement" in deploying, operating ang owning the "investment". Wow. No public insight, no public hearing, no industry or ratepayers debate, just awarding ratepayers fund to An already proven bad actor in the California energy world. Deja vu? The conclusion of this article is half baked. It is a monopoly play using ratepayers money now confiscated as an NRG asset. The 10,000 make ready residential and office site require a 3-5 year subscription, under the EVGo model ranging between $49 - $89 per month. None of the other providers require such fees to use the equipment. No other EVSE can use the make ready sites for 18 months of install. Finally, the reporter, David Herron, obviously spoke with NRG at length but failed to contact any of the competitors, yet refer to them as sour grapes. Note: NRG has less than 20 stations only in Texas. Ecotality and Coulomb, both California based companies have over 6000 installations nationwide.