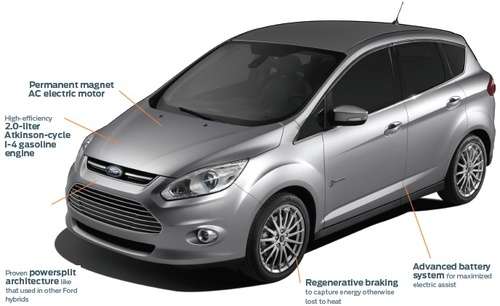 Solid information about the Ford C-MAX Hybrid and Ford C-MAX Energi are slowly emerging as the actual product release date approaches later this year. The latest tidbit was a claim, not yet EPA verified, that the C-MAX Hybrid will get better gas mileage than the Toyota Prius v, and have better technology on-board.

The C-MAX Hybrid and C-MAX Energi, Ford's first hybrid-only car line, are a pair of MPV style vehicles the company is bringing to the U.S. after several years of sales and production sale outside the U.S. At the end of 2012 they will go on sale in the U.S. with both regular hybrid (C-MAX Hybrid), and plug-in hybrid (C-MAX Energi) versions.

In May, Ford announced the 2013 Ford C-MAX Hybrid would have a base price of $25,200 (for the SE model) or $28,200 for the SEL model which adds leather seats, satellite radio, and Sync with MyFord Touch. The price for the C-MAX Energi has not been announced.

A couple days ago, as part of a larger discussion on measures to increase fuel efficiency across Ford's model line, it was mentioned as an aside that the Ford C-MAX Hybrid is expected to be certified by the EPA with 47 miles/gallon fuel efficiency. This would make the C-MAX Hybrid 3 MPG more efficient than the Toyota Prius v. Additionally the C-MAX Hybrid would, according to Ford, have "more performance and technology." The characteristics of the C-MAX Energi have not been announced.

The C-MAX Hybrid fuel efficiency rating has not been certified by the EPA as yet, but the company must be pretty confident of their results to go ahead and make this announcement.

Will claims of "more performance and better technology" and better fuel efficiency tip the field away from the highly popular Toyota Prius? A few miles/gallon better efficiency doesn't seem like much of a winning sales proposition, but what about the other claims? In terms of "more performance" the C-MAX Hybrid will have 50 more horsepower than the Prius v, which should make for a somewhat peppier car. The "better technology" comes down to whether Ford Sync with MyFord Touch is better than the Prius Entune system.

Tsingshan's Threat to Tesla: EV Maker Is In Battery Crosshairs
Tesla-Funded Research Reveals One of The Biggest Mysteries of EV Battery
END_OF_DOCUMENT_TOKEN_TO_BE_REPLACED