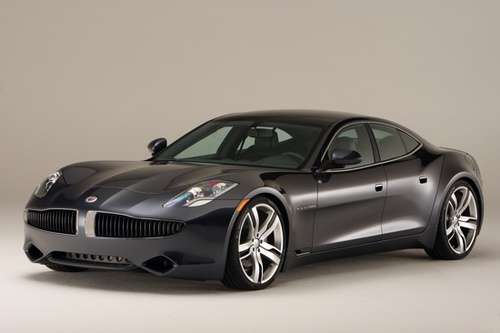 For months some in the punditry have claimed Fisker's woes were about to doom the company, but continued expansion of the company's dealer network, sales of the Karma, and success at raising private investment capital, are signs not of a collapsing company, but a growing one.
Advertisement

Fisker Automotive, the designer and manufacturer luxury plug-in hybrid sedans, is continuing to expand its dealership network. The company, which some claim is about to crumble into bankruptcy, is not acting like it is in financial distress. Instead its behavior is consistent with a growing company selling a popular product, both in the U.S. and abroad.

In early June the company signed an agreement to open Fisker of Montreal, it's 79th dealership world wide. Now news comes that the Guarnieri dealership group will exclusively import and market all Fisker Automotive vehicles into Spain, Portugal, and Morocco. Guarnieri is a long-established dealership group who already works with the likes of BMW, Porsche, Ferrari, and McLaren. The company also announced it is opening a showroom in Oslo Norway.

The announcement was made at the Marbella Luxury Weekend with Henrik Fisker saying “We are delighted to have an importer as well-established and experienced as Guarnieri to bring our range-extended luxury cars to Spain. This further increases Fisker Automotive’s international distribution footprint as we bring the concept of Responsible Luxury to consumers worldwide.”

At the announcement of the Fisker of Montreal deal, of the 79 dealerships 47 were located in North America, with the remainder located in Europe. The deal with the Guarnieri group would expand into a new area of Europe as well as touch into a corner of Africa. One wonders whether it is a good move to launch sales of a luxury car in a country facing the economic troubles underway in Spain.

In early June the company announced an agreement with the Penske Automotive Group to operate a new Fisker franchise, Fisker of Scottsdale, and to market and service Fisker cars in Arizona and the surrounding region.

The company also reiterated claims that the Fisker Karma is proving to be very popular among luxury car buyers. During the first four months of 2012, the Karma was the second best-selling luxury car in the Netherlands, ahead of the Audi A8, Mercedes S Class and BMW 7 Series. Additionally over 1,000 Karma's have been delivered to customers worldwide.

All this expansion comes amid claims in some corners that the company is in serious trouble, and about to crash and burn. The Karma was originally scheduled to be launched in 2009, but instead the first deliveries were in late 2011. That delay, and others, caused the Department of Energy to freeze loans to Fisker that were to have funded construction of a factory for manufacturing the Fisker Atlantic. The frozen loans led to a layoff of workers at the former GM plant in Delaware, and while the company has not officially announced what effect it will have on the launch of the Atlantic (which was slated to begin delivery late this year) it's been rumored the launch of that car will not take place until 2014. To compound those problems, the company had to issue a couple recalls for defective battery packs supplied by A123 Systems.

In late May, Fisker Automotive's management released a "business update" showing the company was in solid financial shape, with over $100 million in revenue from Karma sales. Additionally the company is working the investigator community to raise capital through private investments, in part to replace the Dept of Energy loans. The company has raised over $1 billion in equity investment, and the most recent filing with the SEC indicates the Series D investment round has expanded to a $500 million offering of which $410 million remains to be sold. Series D began last fall with a more modest $150 million goal. In February, Henrik Fisker was quoted saying "We are in discussions for alternative financing. We don't want our future 100 percent reliant on DOE funding. It's been great to have. We just want to be sure we have capital without DOE." Given the company's fundraising track-record since then, they have been successful on that front.

Clearly Fisker Automotive is facing a few challenges, but we see here a company that is expanding and raising investment capital. We do not see here a company teetering on the edge of bankruptcy, despite having lost access to the Dept of Energy loan program. In April, Presidential Candidate Mitt Romney tried to describe the loans to Fisker as a "failed investment" of the Solyndra variety. For months, years maybe, various pundits have complained loudly about Fisker Automotive, with many attempting to tarnish that company with the stain of Solyndra. As the months go on, and the company continues to expand and raise new investment dollars, one wonders just when is this supposed impending failure going to occur. Fisker Automotive simply does not look like an impending failure, despite all the hot air from the pundits.

Anonymous wrote on July 16, 2012 - 9:09pm Permalink
Looks like the only electrics that sell cost around $100,000. Apparently they are benefiting greatly from being the only EV game in town (Tesla and Fisker), although Fisker uses gasoline when that shortranged battery runs out of juice and also anytime the driver demands more power, even though the battery may be fully charged.