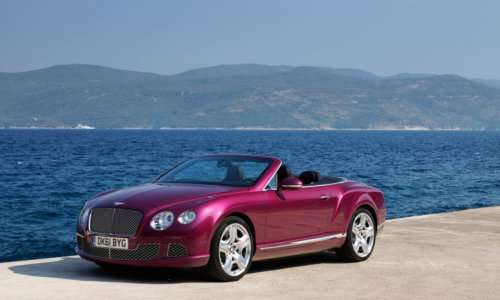 While Rolls-Royce is known for the hush of its engines, sports car aficionados prefer something with a bit more rumble. Bentley obviously gets that, judging by the video file it’s just released of one of its cars in action. Which one? They’re not saying, and since the entire video was shot in the dark, it’s a mystery for now. Personally, I’m betting on a variant of the new Continental GTC.

It opens with a black screen and the words: Secure location. Closed course. Factory test driver. Cut to a garage closing down for the day and the test driver about to head home when he realizes things haven’t been properly locked up. He quickly whisks the cover from the car in the corner and takes it out on the track for a joyride. We catch glimpses of tail lights and the car’s silhouette, accompanied by the throaty sound of the engine. Enjoy it. I did.

While most of us won’t ever get to enjoy the Bentley experience in real life, more and more people are buying the luxury vehicle manufacturer’s cars, and not just in Britain. By October of this year, they sold 5,379 cars, a 33% increase over the previous year. They’re hoping to hit the 7,000 mark by the end of the year. Bentley credits the Continental GT with the increase, since it represents about a third of their sales. It seems the Continental GT is especially popular in China, where sales are up almost 90%. Sales in Europe (excluding the United Kingdom) are up 37% and sales in the Americas are up 33%.

Bentley Motors employs close to 4,000 people to design and produce those 7,000 cars, so obviously a lot of hand-built craftsmanship goes into each vehicle. Apparently they’re the third largest investor in R&D in Britain, which is impressive for what’s actually a fairly small company, production-wise. All that money and attention to detail seems to be paying off, given their increasing sales.

The 2012 Bentley Continental GTC convertible was unveiled at the LA Auto Show last month. With a hand-built 567 hp engine putting out 516 lb-ft of torque, there’s a lot of power under that sleek hood. It’ll do 0-60 in 4.5 seconds. Inside it’s all wood and leather, together with the latest technical gadgets including an eight-inch touch-screen infotainment system. Better start counting your pennies, because the manufacturer’s suggested retail price is $212,800. Gulp. I’ll have to content myself with watching the video.